Msgr. James Swaner marks 60 years of ‘being there for my people, always’ 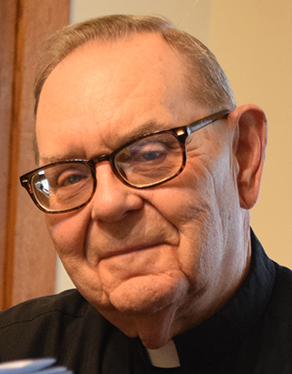 UTICA — Msgr. James Swaner spent 50 of his 60 years of priesthood in LaSalle County so it seemed only natural that he would retire among the people he had served so well. Now just a few steps from St. Mary Church here, he gets calls all the time from people asking if he needs anything — from rides to groceries.

“I’ve got them married, I’ve got them buried,” he told The Catholic Post. “I hardly am able to fill in anywhere that I don’t have someone I’ve baptized or married, or someone who says, ‘I remember what you said at my mother’s funeral.’”

Even a nurse at OSF HealthCare Saint Elizabeth Medical Center in Ottawa said to him, “You’re Father Swaner, aren’t you? I used to serve for you. I just live down the block from you now.”

“It just happens,” he said with a smile.

Friends and former parishioners can help him celebrate his 60th anniversary of ordination with a card shower hosted by St. Mary Parish. The cards may be sent to him at P.O. Box 218, Utica, IL 61373.

Msgr. Swaner was ordained for the Diocese of Peoria on May 28, 1961, by Bishop John B. Franz at St. Mary’s Cathedral in Peoria. Deceased members of his ordination class are Father Michael W. Arms, Father Robert V. Becker, Father Thomas B. Brajkovich, Msgr. Albert Hallin, and Father Raymond C. Jacobowsi. 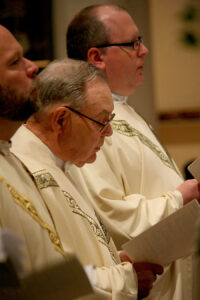 Priesthood is not a hobby, it’s a job, according to Msgr. James Swaner. “It’s not something you just do on the weekends or at a certain time of day. . . . You never know when the phone’s going to ring or the doorbells going to ring,” he said. (The Catholic Post file photo/Jennifer Willems)

Born in Chicago, Msgr. Swaner attended Quigley Preparatory Seminary there and St. Mary of the Lake Seminary in Mundelein. He would study philosophy there for two years before applying to the Diocese of Peoria, which had become a second home for him.

Father William Kwinn, a friend of the Swaner family in Chicago, was pastor at St. Anne in Spring Valley and invited the Swaners to spend summers with him during World War II. Msgr. Swaner remembers serving Mass for him and doing work around the rectory and church.

It was Father Kwinn who eventually convinced Msgr. Swaner to transfer to the Diocese of Peoria. Sent to St. Paul Seminary in St. Paul, Minnesota, he would earn a bachelor’s degree in philosophy and master’s degree in history.

While he had hoped to go on for a doctorate in history at the University of Notre Dame, Msgr. Swaner was needed to teach Latin at Marquette High School in Ottawa and as parochial vicar at St. Columba Parish there. Named assistant principal at Marquette in 1968, he attended classes at Loyola University three nights a week and during the summer to prepare to serve as principal, a role he held from 1969 to 1973.

He said teaching was an enjoyable part of his ministry.

“I had fantastic teachers all through seminary and one of the parish priests we had was somebody we really looked forward to coming in to teach us when I was in grade school,” Msgr. Swaner said. “It was kind of like, ‘I want to be like him.’”

Msgr. Swaner was pastor at Annunciation BVM in Eagle Township, Sts. Peter and Paul in Leonore and St. Mary in Kangley; Resurrection in LaSalle and Sacred Heart in Dimmick; St. Mary in Wenona and St. John in Lostant; and St. Patrick in Washington, with pastoral care for St. Luke in Eureka.

He was named pastor at St. Mary in Utica in 2003 and remained until he was granted senior status in 2016.

In 2000, St. John Paul II made him a Prelate of Honor to His Holiness with the title of monsignor.

“I’m the only monsignor I know of that became a monsignor because the parishioners petitioned the bishop to make him one behind his back,” Msgr. Swaner said of the people at St. Patrick in Washington. “I never knew anything about it.”

Msgr. Swaner was the “go-to guy” when difficult situations arose or repairs were needed, such as sagging roofs in the classrooms of Resurrection School.

After a tornado came through Utica in 2004 and caused extensive damage to St. Mary Church, he oversaw efforts to repair the steeple and stained glass windows, paint the church and put new roofs on the church and rectory.

“I was never blessed with a parish that didn’t need big repairs,” he said with another smile.

Some of the biggest successes came when Msgr. Swaner was able to show parishioners that the Annual Diocesan Appeal could be a godsend when they set a goal for the parish that was over and above what the diocese was asking.

“There was never any need for a special drive or special collection every year because we just linked the project to the ADA,” he said, citing St. Patrick in Washington as a good example. “Year by year we fixed the school and fixed the church and fixed the rectory.”

After he retired, Msgr. Swaner continued to assist in surrounding parishes, continuing to teach and taking a confirmation, but COVID-19 put a stop to that. Recent health issues have delayed a return even further, but nothing has diminished his desire to serve.

“Being there for my people, always,” is what Msgr. Swaner misses the most.