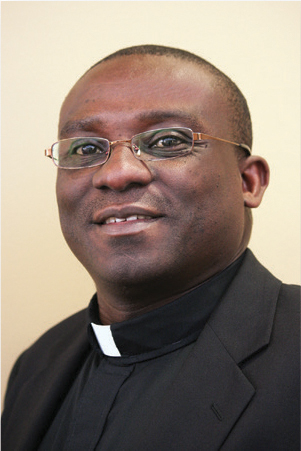 Father Martin was born and raised in Nyakishenyi, Rukungiri District, in the southwestern part of Uganda. His home parish is Mary Mother of the Church, Nyakishenyi, in the Diocese of Kabale.

He began his studies for the priesthood at St. Thomas Aquinas National Major Seminary in Katigondo, Masaka, Uganda, and received a bachelor’s degree in philosophy from Makerere University, Kampala, Uganda, in 1991. Theology studies followed at St. Mary’s National Major Seminary, Ggaba, Uganda, and he earned a bachelor of divinity degree in 1996, also from Makerere University in Kampala. He was ordained for the Diocese of Kabale, Uganda, on July 28, 1996.

Father Martin also holds a licentiate degree of canon law (2004), a master’s degree in religious studies (2006), and a doctorate in canon law (2010), all from Catholic University of Leuven, Belgium.

“It was my childhood dream to be a priest.”

Subsequent appointments were as judicial vicar and co-director of the Tribunal in 2015, and service at St. Mary of the Woods in Princeville in 2017. Granted a leave of absence in 2018, Father Martin was named parochial vicar at St. Patrick Church of Merna in Bloomington in 2020.

Due to COVID-19 precautions, Father Martin is not yet sure about an anniversary celebration.

My vocation to the priesthood started right from childhood. My parents were devoted and very enthusiastic about living their Catholic faith. . . . Whenever we would go to church, I was always curious to observe how the priests celebrated Mass. Getting back home, I would gather my cousins and my younger siblings to ‘celebrate Mass’ for them. It was my childhood dream to be a priest.

However, when I went to high school, I thought of becoming a medical doctor. My elder brother was studying engineering at the university, and I was considering following him there. As I completed the higher secondary level program that would have led me to college, the thought of becoming a priest came back to me in a very profound way. The call was clear to me. With discernment and guidance from a priest friend of the family and the vocations director, my journey to the seminary formation and finally to priesthood was concretized.

My parents were a great influence on my vocation with their love for their faith and the church. I must also mention that knowing priest-missionaries who served in my home parish gave me a dimension of priestly ministry that goes beyond serving my home parish or diocese. . . .

What are some memorable moments?

The day I was ordained a priest by Rt. Rev. Robert Mary Gay at my home parish church on July 28, 1996. A memorable day of my life indeed. . . . I thank God every day, ever since the day I was ordained, that He gives graces to me, an ordinary person, to enable me to do extraordinary actions and more so the action of making Christ present when I celebrate the Eucharist.

What have been the greatest lessons in 25 years of priestly ministry?

The greatest lesson in my 25 years of service as a priest is that wherever I have served as a priest, I have found a new home and family. I have found priests of the Peoria Diocese very friendly and a joy to work with. . . . Wherever I have served, I have come to know priests, religious and lay faithful. I have always been welcomed in their homes and communities and for this I am gratefu