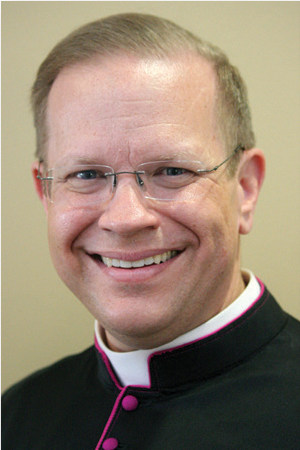 As executive director of the Archbishop Fulton J. Sheen Foundation, Msgr. Deptula has worked long and hard to see that the work and heroic virtues of the sainthood candidate are known around the world. The relationship doesn’t stop there, however.

“Fulton Sheen has changed my priesthood. I feel truly that he is my diocesan brother, my older brother in the priesthood,” Msgr. Deptula said. “He has challenged me. He has consoled me. When I think of the many challenges he faced in life, I think I can face the challenges in my priesthood.”

A priest who says, “I love everything I do — that’s not an exaggeration,” Msgr. Deptula has had many opportunities to love his ministry for 25 years.

After ordination he was assigned to Sacred Heart in Moline and was named assistant chaplain at St. John’s Catholic Newman Center at the University of Illinois in Champaign in 1999. The same year he began work as associate director of vocations for the Diocese of Peoria, a role he would retain until 2015.

He was appointed director of the Office of Divine Worship in 2004 and served until 2018. At the same time he was named vice chancellor.

Msgr. Deptula has led the Sheen Foundation since 2008.

He was named a Chaplain to His Holiness by Pope Benedict XVI in 2009 and given the title of monsignor.

Mindful of the COVID-19 guidelines that are in place, Msgr. Deptula will mark his anniversary with a small, private dinner with his closest friends.

The festivities continue on Saturday, May 22, when he will preach and celebrate the 4 and 5:30 p.m. Masses at St. Matthew in Champaign. There will be a receiving line after the 5:30 p.m. liturgy.

Born in Belleville, New Jersey, Msgr. Deptula relocated to Florida with his parents, Stan and Betty, and two younger brothers when he was very young. It was in seventh grade that he felt very clearly that God was calling him to be a priest.

Accepted as a seminarian for the Diocese of St. Petersburg, he was sent to Immaculate Heart of Mary Seminary in Winona, Minnesota. There he experienced his first winter and got to know the seminarians from the Diocese of Peoria.

After three years of discernment and prayer he transferred to the Diocese of Peoria and continued his studies for the priesthood at St. Charles Borromeo Seminary in Wynnewood, Pennsylvania. There he earned a master of divinity degree.

“I can honestly say I’ve never questioned my vocation,” Msgr. Deptula said. “I wrestled with God in parts of the vocation — for instance the discernment to go to move from Florida to Illinois was a prolonged question. But once I was convicted I never question.”

What has given you the most joy in our priesthood?

“There is nothing like Newman ministry. That just changed my life,” he said. “It changed my heart. It changed my priesthood. The spirit, the energy, the challenges of working with young people of college age. I loved that,” Msgr. Deptula told The Catholic Post.

He also cited the lessons he’s learned from Fulton Sheen, including the El Paso native’s commitment to prayer, his love of the Gospel and spreading the faith, and the joy with which he did it.

Msgr. Deptula said all the excitement of working on the Sheen cause for beatification and sainthood and getting to know people around the world as a result has provided many memorable moments.

“But the absolute highlight was seeing my brother ordained a priest,” he said, referring to Father Matthew Deptula, who is now pastor at St. Edward in Chillicothe. “Preaching his first Mass and being a whole part of that in his life.”

The staff at St. Matthew Church developed a thriving virtual ministry in response to the restrictions made necessary by COVID-19. “To me, that was all Fulton Sheen,” Msgr. Deptula said, talking about the archbishop’s pioneering use of media.

“I like to hope that we just kept going as deep as we could. We didn’t stop with just Mass,” he said. “We had antics from the rectory, we had Holy Hours, we had Solemn Vespers, we had novenas and devotions. We just wanted to feed our people.”