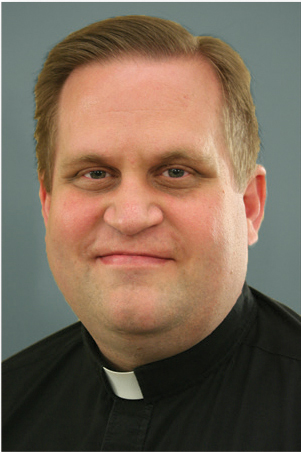 Born in Chicago, Msgr. Kruse graduated from Maine West High School in Des Plaines in 1970. He went on to study philosophy at Immaculate Heart of Mary Seminary at Saint Mary’s University of Minnesota, earning a bachelor’s degree in 1992.

He completed his studies for the priesthood at St. Charles Borromeo Seminary in Wynnewood, Pennsylvania, receiving master of divinity and master of arts degrees in 1996.

Two years later he went to Sacred Heart in Granville and St. Patrick in Hennepin as pastor, and then Holy Cross in Mendota and Sts. Peter and Paul in Peterstown in 2003. That same year he was appointed assistant vocation director. In 2004, he also was given pastoral care for St. Theresa in Earlville.

Msgr. Kruse was sent to Catholic University of America in 2008 to study canon law and earned a licentiate in canon law in 2010. That year he was named pastor of St. Monica in East Peoria, vice chancellor of the Diocese of Peoria, and adjutant judicial vicar of the Diocesan Tribunal. He received additional duties as vicar general in 2011 and was named a Chaplain to His Holiness with the title of monsignor by Pope Benedict XVI in 2011.

Msgr. Kruse has been the pastor at St. Mary of the Woods in Princeville since 2020. In clergy appointments announced in this issue of The Catholic Post, he was named pastor of St. Louis in Princeton, effective June 9.

Before he leaves Princeville, he will host a simple open house on Sunday, June 6, from 2 to 4 p.m. to celebrate his anniversary.

As a young boy, I always loved going to Mass and being an altar boy. It was at Mass that I first felt drawn to the priesthood. Over time, I wanted to do the things that the priest was doing at Mass.

Celebrating Mass and the other sacraments have been the sustaining joy throughout my priestly life. Early in my priesthood, I greatly enjoyed visiting the Pekin Federal Prison each week. Later, I enjoyed many construction and restoration projects, like the ones in Wyoming and Peterstown. I enjoyed my time serving in the bishop’s office as vicar general. But more than anything, I find great joy serving as pastor.

I have many memorable moments as a priest. But, one day stands out: June 27, 2019. On that day, I assisted with the transfer of the mortal remains of Venerable Archbishop Fulton Sheen from New York to Peoria. It was an amazing and historic day. Early in the morning in New York, I offered prayers as I touched Sheen’s casket and then the inside of his original tomb. Later that same day, I touched his same casket and his new tomb in Peoria. I was filled with great joy to finally pray to Sheen at his tomb in his home cathedral. It was very humbling to witness and participate in the transfer of his remains. . . .

I have learned over the years that the People of God are incredibly resilient and possess a deep faith. Their faith is truly inspiring. Over these 25 years the Church has faced many challenges, such as the clergy abuse scandal, realigned parishes, the delay in Sheen’s beatification, clergy changes, the current pandemic and so much more. Despite these challenges, the people have kept the faith. Their example of faith has taught me to go deeper into the mystery of faith.