Msgr. Brian Brownsey — 25 years of fatherly care for faithful of all ages 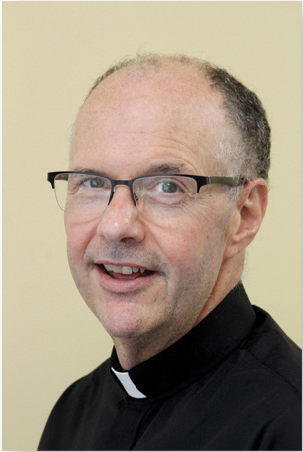 Msgr. Brownsey quips that at 58, he must be the oldest Newman Center chaplain in the country. But he wouldn’t trade his ministry to the college students at Bradley University and Illinois Central College for anything.

Msgr. Brownsey said his affinity for Newman ministry and Catholic schools may stem from the fact that he did not go to a Catholic school growing up in Streator.

“From the time I was little I was intrigued by all the church stuff,” he said. “It was in those confusing times (after Vatican II) when Mom didn’t know what to teach us.”

Coadjutor Bishop Louis Tylka, Dr. Noreen Dillon and Msgr. Brian Brownsey share a light moment after Dillon was honored as the Distinguished Principal of the Year for 2019-2020 by the Office of Catholic Schools on May 5. Msgr. Brownsey said he loves working with “children” of all ages. (The Catholic Post/Jennifer Willems)

After graduating from Streator High School, Msgr. Brownsey went on to Illinois Valley Community College and earned a degree in applied computer science from Illinois State University. He used that training at State Farm in Bloomington for five years before entering Mount St. Mary’s Seminary in Emmitsburg, Maryland, and earning a master’s degree in theology.

His first assignments after ordination took him to the Quad Cities, where he served as parochial vicar at Sacred Heart in Moline and added chaplaincy at Alleman High School in Rock Island in 1997. Ministry as a pastor and duties as a chaplain would continue at St. Mary in Utica and Marquette High School in Ottawa.

Msgr. Brownsey was named associate director of vocations for the Diocese of Peoria in 1999, and director in 2003, a post he would hold until 2015. He was also the diocesan director of Cursillo and TEC from 2000 to 2005.

Along the way he was rector at St. Mary’s Cathedral and pastor of St. Peter Parish, both in Peoria, and was appointed pastor at St. Mark Parish, also in Peoria, in 2011. He has been the director and chaplain at St. Joseph Catholic Newman Center since 2008.

He was named Chaplain to His Holiness by Pope Benedict XVI in 2011 and granted the title of monsignor.

Msgr. Brownsey is not planning a celebration for his anniversary, other than “to celebrate Mass well.”

“About the time I started to say, ‘I think I’d like to be a priest’ around the fourth grade, I got the reaction of ‘Why would you ever want to do that?’ I put it away,” he told The Catholic Post.

“I didn’t pay a whole lot of attention to faith until after I got out of college,” he recalled. “But my roommate was converting and asked me to be his sponsor. . . . I felt obliged to say ‘yes’ and started going to the classes and learning all the stuff they hadn’t taught us back in the day. I specifically remember one time, on my own, walking into Holy Trinity Church (in Bloomington) and I said, ‘This is amazing.’”

Msgr. Brownsey established a “heart-to-heart” relationship with the Lord and it wasn’t long before his interest in the priesthood surfaced again.

“What has evolved over the years about priesthood is my idea of what it means to be a father. Twenty-five years ago I gave lip service — ‘Of course I’ll be a father. I will baptize and I will bring new life into the world through baptism,’” Msgr. Brownsey said.

“Along the way I started having this paternal care for the people. Talk about children! There are my grade school children (at St. Mark) and my Newman kids, but I have a little girl who is 93 years old. She’s my daughter and she’s lonely at the nursing home,” he said. “And I have a son who is 53 and he’s crying because his wife left him. They’re all my children, whether they’re 95 or 2.”

Lessons learned in 25 years of priesthood?