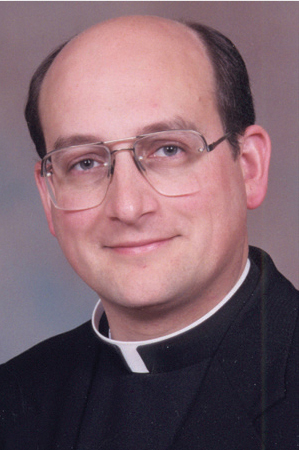 Father Thieryoung said if someone hadn’t told him it was his 25th anniversary of ordination he wouldn’t have noticed.

He will celebrate with Mass at 2 p.m. on Sunday, May 30, at St. Catherine Church in Aledo, where he is the pastor. A reception will follow.

While he is an Illinoisan now, Father Thieryoung was born and raised in Cleveland, Ohio. He attended Blessed Sacrament School and had one year at St. Ignatius Jesuit High School before his parents, Donald and Rosemary, took the family to Necedah, Wisconsin, where he completed high school.

He earned a bachelor’s degree from Cleveland State University, with majors in history and communication and a minor in English. While he was certified to teach history, English and reading in Ohio for grades seven through 12, Father Thieryoung was unable to find a teaching position and worked a variety of jobs until he realized God was calling him to the priesthood.

He started studying for the Diocese of Cleveland, but applied to the Diocese of Peoria after hearing Bishop John J. Myers give a talk and continuing discernment with his spiritual director. Sent to St. Charles Borromeo Seminary in Wynnewood, Pennsylvania, he graduated with a master’s of divinity and a master’s degree in pastoral theology.

His first assignment was as parochial vicar at Immaculate Heart of Mary in Galesburg. He was named administrator of St. John in Bradford in 1997, and pastor of the Bradford parish and St. Mary in Tiskilwa in 1998.

Father Thieryoung has been pastor of St. Catherine in Aledo, St. Anthony in Matherville, and St. John in Viola since 2002.

Father Thieryoung said it was discovering his faith as an adult that drew him to the priesthood. He never stopped practicing, but had grown “tepid.”

“My goal since junior high was to be a history teacher,” he said. “I always pictured myself getting married and settling down somewhere.”

It was during his time at Cleveland State University that he started to ask, “Why am I Christian anyway? Why do I believe what I believe? What are my beliefs?”

His studies in history and literature convinced him of the truth of Christianity intellectually, but he sensed there had to be more. “If God was not a rule maker, he wasn’t a taskmaster, he had to have a plan for me and each and every person,” he said.

Eventually he asked God, “What do you want me to do?”

Father Thieryoung said it was his reading and deepening knowledge of the faith, combined with prayer, that helped him see God was calling him to the priesthood in service of the church.

What has been the biggest influence in your vocation?

“There’s no doubt my parents were,” Father Thieryoung said. “They were devout Catholics.”

He also credited attending Catholic schools in Cleveland, as well as the city’s many churches, nationalities and spiritual traditions. In addition to attending Roman Catholic Masses, the family went to Eastern Catholic churches, too.

The lives of the saints also played a role.

But his “road to Damascus” moment came when he “stumbled upon” the writings of St. Teresa of Avila and St. John of the Cross while he was studying T.S. Eliot.

Pivotal Scripture passages include Luke 12:49: “I have come to set the earth on fire and how I wish it were already blazing!” and John 10:10: “I came so that they might have life and have it more abundantly.”

“Celebrating the sacraments, especially the Mass, and the opportunity to teach and guide others to Christ — children, adolescents and adults,” Father Thieryoung told The Catholic Post.

“No matter what, you make every effort to adapt and find a way to bring Christ to others,” he said.