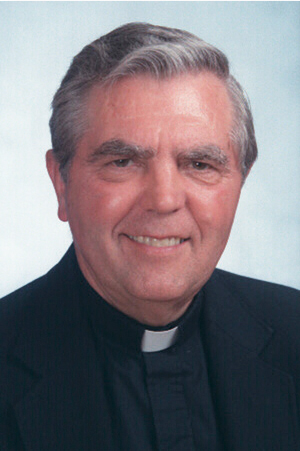 At 59, not only was Father Meyer the oldest member of his ordination class for the Diocese of Peoria, but he was one of the oldest men to enter St. Charles Borromeo Seminary in Wynnewood, Pennsylvania, in 1992.

With that age came experience from 32 years of marriage and parenting 10 children. He also brought with him 36 years as a dentist, with a practice in Des Plaines.

Father Meyer said that after his wife, Cathy, died in 1988, “I wished to devote the balance of my life to the church. There was a suggestion that I become a (permanent) deacon, but I just didn’t feel that was what I was being called to do.

“It was for the love of God that I wanted to offer my services, if I would be accepted, and of course I was,” he said. “It was all in God’s hands.”

Born in Chicago, Father Meyer had considered the priesthood earlier in life and even attended Quigley Preparatory Seminary in Chicago for two years. He would transfer to DeLaSalle High School and go on to earn a doctor of dental surgery degree from Loyola University Dental School in 1956.

He and Cathy were founding members of St. Emily Parish in Mount Prospect and were very active in the parish as their five sons and five daughters attended St. Emily School. Among other things, they took the lead in the parish’s pro-life ministry.

The couple lost four of their children to cystic fibrosis. Now grown, four remain close to home in the Chicago area, one lives in Atlanta and one lives in Greenville, South Carolina. Father Meyer says proudly that he is the grandfather of 23 and is about to become a great-grandfather.

His family provided a good support system during his two years as parochial vicar at St. Columba in Ottawa and then 11 years as pastor at St. Francis of Assisi, also in Ottawa. It was close enough that they could come and visit him often, and Father Meyer returned to Mount Prospect on his day off each week to celebrate Mass at St. Emily and see them.

Granted senior status in 2009, Father Meyer moved back to Mount Prospect and assisted with Masses and confessions at St. Emily and surrounding parishes for 10 years. While he hasn’t been as active in the last two years, he said he’s in “relatively good health” and still offers Mass every day.

Father Meyer is planning to celebrate his anniversary with a Mass at St. Emily followed by refreshments for invited guests.