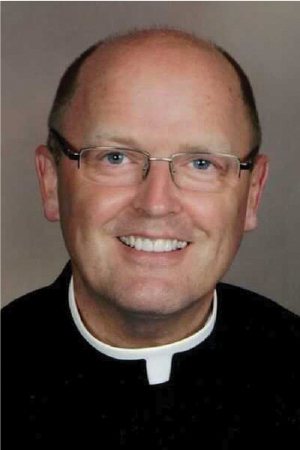 None of his classmates at Saranac Lake Central High School in Saranac Lake, New York, were surprised when Father Wilder went into the seminary after graduation. He had been an altar server right up until his senior year and was active on the youth council for the Diocese of Ogdensburg, New York.

But after two years, he started to think that God had other plans for him and he left. It was on a pilgrimage to Medjugorje in May 1989 that the Blessed Mother and the Lord “relit my vocation,” he said.

He became acquainted with the Diocese of Peoria through Msgr. Eric Powell, now pastor of Epiphany Parish in Normal, during a trip to Rome. Father Wilder said Msgr. Powell helped him get an audience with St. Pope John Paul II.

He would meet Bishop John J. Myers of Peoria during a National Rosary Congress he was helping to organize. Bishop Myers celebrated one of the Masses for the event.

Accepted as a seminarian for the Diocese of Peoria, he earned a bachelor’s degree in philosophy at Wadhams Hall Seminary College in Ogdensburg, New York, in 1990. He completed his studies at Mount St. Mary’s Seminary in Emmitsburg, Maryland, receiving a master of divinity degree and a master’s degree in theology and church history.

Father Wilder’s first assignments were as parochial vicar at Holy Family in Lincoln, and St. Columba and St. Patrick in Ottawa. After two years as chaplain at the St. Francis of Assisi Catholic Newman Center at Western Illinois University in Macomb, he served as pastor at St. Mary in El Paso and St. Patrick in Minonk, and then St. John the Evangelist in Walnut and Immaculate Conception in Ohio.

In 2010, Father Wilder was given permission to do missionary work and spent time in India, Africa, Central America and South America. In 2013, he was released for work outside the diocese. For much of the last eight years he has been working in California as a chaplain at JSerra Catholic High School in San Juan Capistrano, and assisting with parish ministry at St. Killian Church in Mission Viejo, Holy Spirit Church in Fountain Valley, and St. Hedwig Church in Los Alamitos.

Father Wilder has now completed his assignment in the Diocese of Orange, California, and is unassigned.

He doesn’t have a celebration planned at this time, but said he would have a Mass and gathering sometime during this year.

“I have a vivid memory of May 26, 1973. That was the day I made my First Communion with my twin brother, David,” Father Wilder said. “During the consecration — David and I are kneeling in the front pew — I remember thinking, when Father held the Eucharist up over the altar, ‘I’m going to do that someday.’”

Father Wilder would celebrate his first Mass 23 years later to the day.

Who has been the greatest influence on your vocation?

Father Wilder cited Father Jim Steuer of the Diocese of Albany, New York, who became his “spiritual father” after an unscheduled confession. The priest would help Father Wilder discern his vocation and offered a foundational truth he tries to live by: “Whenever you speak to anybody, always remember it’s heart speaking to heart. The people will know if you love them.”

He also credits his mother, Patricia Wilder, as being a pivotal influence.

“She always put God first in her life,” Father Wilder said. “Her love for God could be seen in the manner of her life. She was the real deal — what you see is what you get. She was a steady witness.”

“Administering the sacraments to the people of God,” Father Wilder said.

“Being a significant part of their lives and the privilege of proclaiming the Gospel to them,” he added. “Walking with them through the daily events of life, faith and family.”

Father Wilder said he has had at least 9,125 memorable moments.

“That’s the number of days I’ve been ordained,” he said. “I figure every day stands on its own.