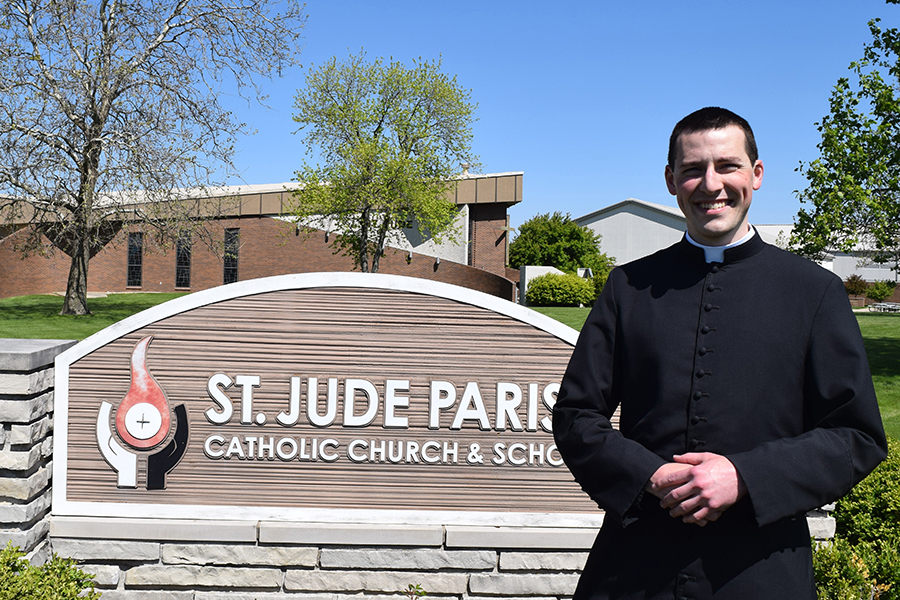 Deacon Nicolas Wilson is pictured outside the church of his home parish, St. Jude in Peoria. He and Deacon Austin Bosse will be ordained to the priesthood at St. Mary's Cathedral in Peoria on Saturday, May 29. (The Catholic Post/Tom Dermody)

Wherever Deacon Nicolas Wilson is assigned to serve in the 26-county Diocese of Peoria after he is ordained to the priesthood on May 29, the odds are good that he’s been there before.

The son of Richard and Lori Wilson of Dunlap attended Catholic elementary schools in Chillicothe and Kickapoo and high school at Peoria Notre Dame. As a seminarian he had summer assignments in Monmouth, Rock Island, and LaSalle. 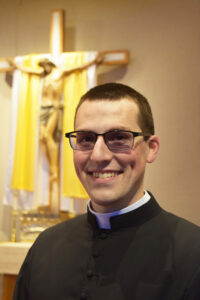 But Deacon Wilson really traveled around central Illinois during two years of leadership with the diocese’s summer youth series Totus Tuus, in which teams bring weeklong religious education experiences from parish to parish.

“I’m very thankful for all of the summers and times spent around the diocese,” said Deacon Wilson in a May 13 interview with The Catholic Post. “Every parish has a different character, and there are characters within every parish,” he added with a knowing smile. “It’s great that they are all different.”

But what all parishes have in common is the need for holy, good priests — and that’s just what Deacon Wilson hopes to be.

“As a diocesan priest . . . you want to make sure people are being served and getting what they need,” said Deacon Wilson. “You hope that you bring them into relationship with God, that they know Jesus Christ, that they love him and want to follow him. That they receive his life and in the Holy Spirit live that life and give it to others. As a priest, you’re God’s instrument in doing that sacramentally.”

The influence of several good priests have brought Deacon Wilson to the eve of his priestly ordination.

Among them is Msgr. Stanley Deptula, who will be his vesting priest during the Ordination Mass at St. Mary’s Cathedral.

“When I got to Peoria Notre Dame, and there was an environment of prayer, my prayer life took off and I could hear the voice of the Lord,” said Deacon Wilson. He had started feeling the stirrings of a priestly vocation as an altar server at St. Jude, but at Peoria Notre Dame it moved from an openness to a commitment.

Msgr. Deptula was “welcoming and encouraging” during his service at the cathedral. When Deacon Wilson, after graduating from Peoria Notre Dame in 2013, entered Immaculate Heart of Mary Seminary at Saint Mary’s University of Minnesota, Msgr. Deptula hired him for two summers for parish work at the cathedral, St. Bernard Parish, and duties with the diocesan archives and museum.

During those summers, Deacon Wilson saw Msgr. Deptula’s gift for preaching and his “priestly heart for making people recognize that God is speaking to them, they are welcomed, and that they are deeply involved in the life of the church.” 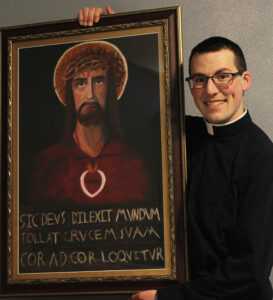 Deacon Wilson holds his painting of the Sacred Heart of Jesus. The image will adorn the prayer card distributed following his May 29 ordination. (Provided photo)

Academics has always been a strong suit for Deacon Wilson, who finished third in his class at Peoria Notre Dame. He just completed his preparation for the priesthood at Mount St. Mary’s Seminary in Emmitsburg, Maryland, where he earned a master’s degree in systematic theology. This month he was named recipient of the Rev. Harry J. Flynn Memorial Award for the highest scholastic average maintained throughout that course of studies at the seminary.

Deacon Wilson expressed gratitude for the friendships he made during his eight years of seminary studies and listed a six-week immersion in Spanish in Guatemala as a highlight.

Among Deacon Wilson’s hobbies is art. In fact, he painted an image of the Sacred Heart of Jesus to adorn the prayer card that will be distributed following his ordination.