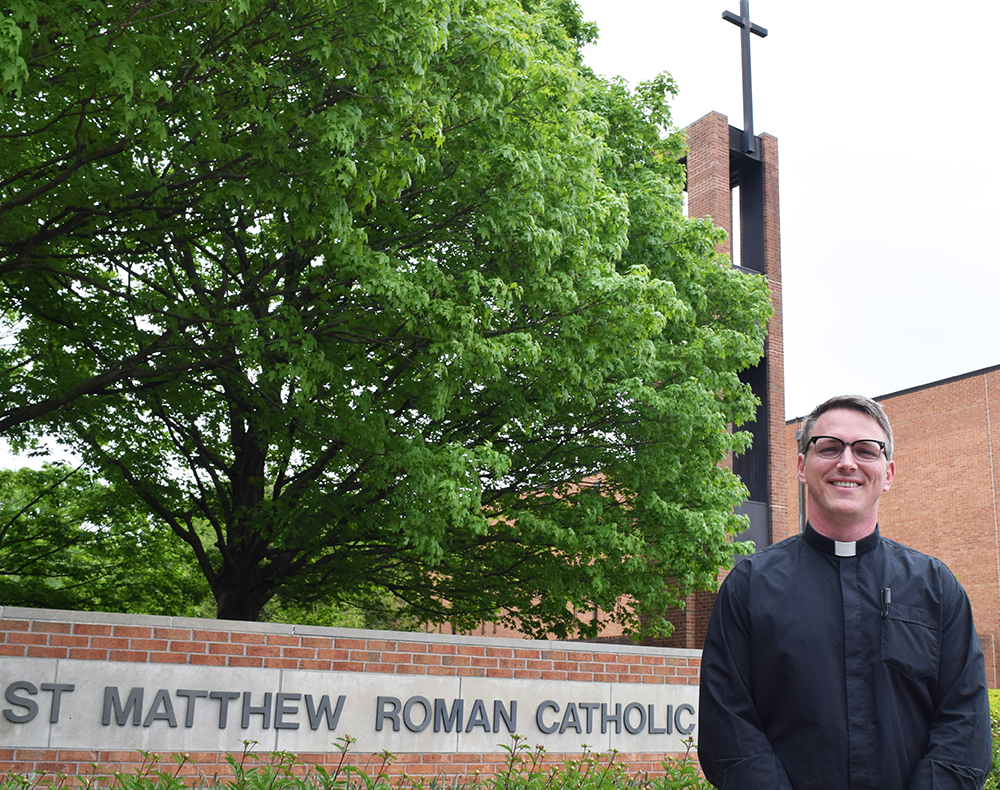 Deacon Austin Bosse is pictured outside St. Matthew Church in Champaign, where he will offer his first Mass the morning after his May 29 ordination to the priesthood. (The Catholic Post/Tom Dermody)

After years of ignoring or saying “no” to inner callings to consider the priesthood, Deacon Austin Bosse realized he was arguing with God and wasn’t going to win that battle.

When he finally shared the history of those proddings with Msgr. Brian Brownsey after an Emmaus Days retreat, the priest just laughed.

“You know you have a vocation, right?” said Msgr. Brownsey. 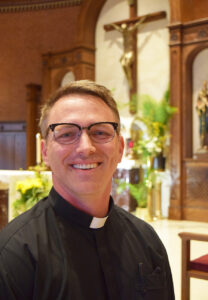 “Yeah, I think I’m starting to realize that,” Deacon Bosse acknowledged. “And an overwhelming sense of peace came,” he now recalls.

That decision — and the ensuing four years of seminary preparation at Mount St. Mary’s Seminary in Emmitsburg, Maryland, leading to his scheduled ordination on May 29 — are an answer to the longtime, daily prayers of Deacon Bosse’s elderly grandmother back in his home state of Kansas.

“Grandma Eilert always said we were too big a Catholic family not to have a priest in it,” recalled Deacon Bosse, who is the youngest of four children of J.R. and Rosie Bosse and was raised on a beef cattle farm near Onaga, Kansas.

“She prayed a rosary every day for a priest in the family, and for her grandkids,” said Deacon Bosse. “She was very elemental in this whole thing, I have no doubt.” In fact, the bottom of the chalice he will use as a priest bears the engraving “In memory of Grandma Eilert.”

Grandma Eilert died in 2018 at the age of 101. But she wasn’t the only family influence on Deacon Bosse’s faith and vocation.

“YOU’RE SUPPOSED TO BE A PRIEST”

Deacon Bosse credits his sister, Alena Brautigam, as being “my first spiritual director.” When he was a college student at Kansas State earning a degree in bakery science, “she got me to go through RCIA . . . twice” — first to deepen his own understanding of the Catholic faith he was raised in, and then to sponsor someone who was joining the church.

“She volunteered me,” said Deacon Bosse. “You do what your sister asks.”

Later, after he had begun five years of employment with Frito-Lay — two years in Topeka, Kansas, and three at a corn handling facility in Sidney, southeast of Champaign — Alena offered advice that would shape her brother’s future. First, to cope with job stress, she suggested he pray the rosary during his work commute.

It was at the end of one of those driving rosaries that the first thought of priesthood came. Reflecting on three failed relationships with women, he asked God “Why?”

“The next thought that came into my head was “Maybe it’s because you’re supposed to be a priest.”

Deacon Bosse ignored the thought for the next two years and continued with his career plan to reach Frito-Lay corporate headquarters in Texas. He made mistakes in his personal life, however, moved to Illinois, and still was not finding fulfillment in his work. Alena suggested he start going to daily Mass, and Deacon Bosse made a commitment to focus on living his faith.

He became active at St. Matthew Parish, including making a regular Holy Hour. Another thought of priesthood was reinforced when Father Robert Lampitt preached on vocations to the priesthood during a Mass as Deacon Bosse sat in the pew with a young woman he was dating at the time. “It felt like he was talking directly to me,” said Deacon Bosse. The relationship would soon end, and Father Lampitt — “my first true spiritual director” — convinced a reluctant Deacon Bosse to attend Emmaus Days. Within a couple of years, he would be back from seminary leading Emmaus Days as prefect.

Deacon Bosse, who earned a bachelor of sacred theology degree, said he hopes to be a “holy and faithful” priest and a good spiritual father to those he serves. He credits Father Brian Doerr, a former vice rector at Mount St. Mary’s, for showing him “what it meant to be a father as a priest.”

Among several other priestly influences were Father Lee Brokaw and Father Daniel McShane, now priests of the Peoria Diocese who were ahead of him in the seminary. “Seeing their joy after ordination gave me a lot of inspiration and hope,” he said.