PUTNAM — Since he was granted senior status in 2014, Father R. Michael Schaab has been working to make things grow on his 15-acre hobby farm in Putnam County. That includes apples, cherries, pears, peaches, raspberries and red and black currants.

“My theory was I’ll plant everything I can and we’ll see what likes it here,” he said. “What doesn’t like it we’ll replace with things that do like it.”

Much of his 50 years as a priest has been about planting seeds, too — seeds of faith, seeds of knowledge, seeds of ecumenism, and seeds of understanding to benefit others and continue his own spiritual and priestly growth. 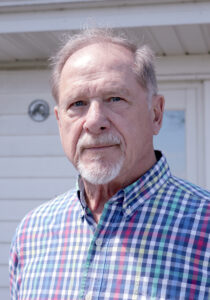 Father Schaab on his hobby farm in Putnam County. (The Catholic Post/Jennifer Willems)

That quest started when Father Schaab was in the second grade at St. Patrick School on Peoria’s south side. He remembers helping Sister Patrice, SSND, in the sacristy and while his vocation was fostered there, he didn’t make a decision to go to the seminary until his senior year at Spalding Institute.

Father Schaab was ordained on May 22, 1971, by Bishop John B. Franz at St. Mary’s Cathedral in Peoria.

He served as parochial vicar at St. Malachy in Rantoul and Holy Trinity in Bloomington before being sent for post-graduate studies in sacramental theology at San Anselmo in Rome from 1977 to 1979. Also studying there were young priests who would go on to serve as Cardinal Wilton Gregory of Washington, D.C., Bishop Felipe de Jesus Estevez of St. Augustine, Florida, and Bishop Thomas Olmsted of Phoenix, Arizona.

“It was a great mix of different theologies and personalities,” Father Schaab said.

“When I first applied to Bishop (Edward) O’Rourke, I told him I thought I was celebrating the sacraments well, but I’m not sure what I’m celebrating,” he told The Catholic Post. He was 248 pages into his dissertation when he was called back to Illinois to serve as director of religious education for the Diocese of Peoria from 1979 to 1985.

Father Schaab would also be released to teach from 1991 to 1995 and spent three years as spiritual director and lecturer at St. Dominic’s Major Seminary in Lusaka, Zambia, and St. Augustine’s Major Seminary in Kabwe, Zambia, followed by one year at St. Patrick’s School of Theology in Carlow, Ireland, and one year at Catholic Theological Union in Chicago. Along the way he picked up summer courses in African Christian Spirituality, so he could be of more help the seminarians in Zambia.

As a pastor or administrator, Father Schaab has served at St. Patrick Church of Merna in Bloomington and St. Mary in Downs; Mary, Our Lady of Peace, in Orion and St. Maria Goretti in Coal Valley; and St. Pius X in Rock Island. He continues to help with Masses at parishes in the Diocese of Peoria and the Archdiocese of Chicago.

Among the formative experiences that dot his priesthood is the Jewish-Catholic-Muslim dialogue in Rock Island, which he called “a great grace.” With Rabbi Tamar Grimm of the Tri City Jewish Center he would lead an eye-opening pilgrimage to the Holy Land for Christians and Jews in 2014.

In recent years he also has shared his vast knowledge and experience as a Scripture columnist for The Catholic Post.

Father Schaab said that all this and more has left him feeling that he is walking on sacred ground.

“It goes back to what Paul VI said when he went to Africa and gave several talks about updating missiology,” he explained. “One of the things he said is it’s wrong to think that missionaries are bringing Christ to Africa. What you’re doing is helping people discover the Christ who is already there. That’s the reason for this sacredness — Christ is truly present there.”