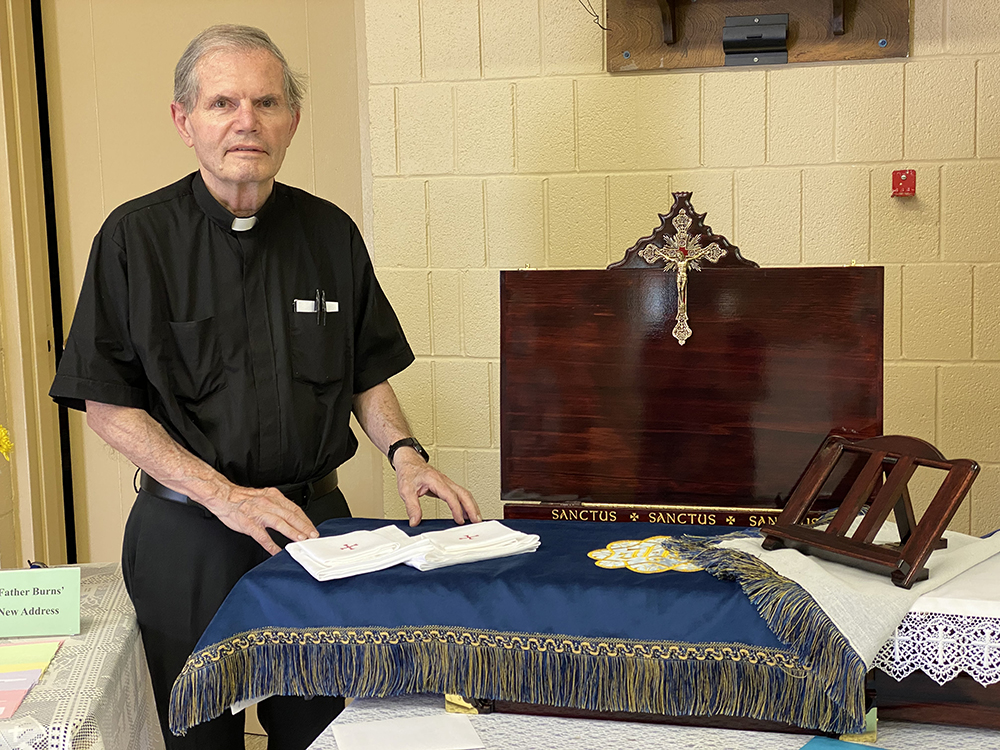 Father John Burns, who was granted senior status on March 1, is pictured with gifts he received May 2 from members of the three parishes he served since 2005 -- St. John the Apostle in Woodhull, St. John the Evangelist in Galva, and St. John Vianney in Cambridge. The gifts included a handcrafted Hemlock wood portable altar, a handmade missal stand, altar linens and a blud vesperal cloth. (Provided photo)

Twenty-five priests are receiv­ing new assignments in a series of appointments announced this month by Bishop Daniel R. Jenky, CSC. (Click here for the full list.)

While most of the appoint­ments take effect on Wednesday, June 9, the transition to senior status of Father John Burns, 75, was granted on March 1.

Father Burns had been pastor of St. John the Apostle Parish, Woodhull; St. John the Evange­list Parish, Galva; and St. John Vianney Parish, Cambridge, since 2005. Succeeding him as pastor of those faith communities is Fa­ther Johndamaseni Zilimu, who continues as pastor of Saint John Paul II Parish in Kewanee and chaplain of OSF HealthCare Saint Luke Medical Center in Kewanee. 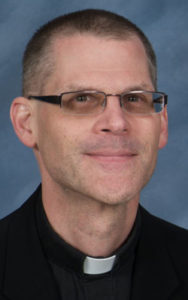 Among the June 9 assignments is the announcement that Father Jeffrey Laible has been granted a five-year release to serve as vicar general in the Archdiocese for the Military, USA. Based in Wash­ington, D.C., the archdiocese provides the Catholic Church’s full range of pastoral ministries and spiritual services to those in the United States Armed Forces around the globe.

Father Laible, pastor of four parishes in Logan County, is a colonel with the Illinois Air Na­tional Guard who serves at Joint Force Headquarters at Camp Lincoln in Springfield. He has also served as spiritual director for the “Warriors to Lourdes” pil­grimages that offer a way to find peace to those scarred by combat.

As vicar general, Father Laible will serve with Archbishop Timothy P. Broglio and be responsible for the coordina­tion of the archdiocesan staff in the provision of services, information and guidance to the clergy and faithful the global archdiocese. The Archdiocese for the Military, USA, includes more than 220 installations in 29 countries, patients in 153 Vet­erans Administration Medical Centers, and federal employees serving outside the boundaries of the U.S. in 134 countries.

The Catholic Post is planning feature stories on both Father Burns and Father Laible for its June 6 edition.

Father James Pankiewicz has been named administrator of the Kickapoo and Elmwood faith communities.

After serving for the past year as pastor of St. Mary of the Woods Parish in Princeville, Msgr. James Kruse has been named pastor of St. Louis Par­ish in Princeton. Father Corey Krengiel will become the ad­ministrator in Princeville while remaining chaplain of Peoria Notre Dame High School, where he has served since 2019.

Father Timothy Hepner, who has been administrator of St. Louis Parish in Princeton for a year, has been assigned as pas­tor of Immaculate Conception Parish, Monmouth; St. Patrick Parish, Raritan; and as chaplain of the St. Augustine Newman Club at Monmouth College. Msgr. Thomas Mack, pastor in Monmouth and Raritan for nine years, has been named “pastor emeritus” and will assist with sacraments at both parishes.

The new pastor of St. Patrick Parish, Arlington; Holy Trinity Parish, Cherry; and St. Thomas More, Dalzell is Father B. K. Thaddeus Tran, who has served as parochial vicar of St. Patrick Parish in Washington and St. Monica Parish in East Peo­ria since 2018. Father Patrick Fixsen, who has guided the faith communities in Arlington, Cherry, and Dalzell for 11 years, will become parochial vicar in Washington and East Peoria.

Also receiving a new assign­ment is Father Ryan Mattingly, who was ordained in 2018 and has served as parochial vicar of St. Michael the Archangel Parish in Streator and Sts. Peter and Paul Parish in Leonore since that time, adding duties as chaplain of Marquette Academy in Ottawa in 2019. Father Mattingly has been named administrator of St. Luke Parish in Eureka and St. Joseph Parish, Roanoke, as well as chaplain/director of the Salve Regina Newman Center serving Eureka College. In those assign­ments he succeeds Father Eugene Radosevich, who has served in Eureka for 13 years and will become an assistant chaplain at OSF HealthCare Saint Francis Medical Center in Peoria.

Several priests who had been serving as administrator of parishes have been named pastor, including Father Joseph Baker (St. Ambrose in Milan and St. Patrick in Andalusia); Father Lee Brokaw (Corpus Christi, Immaculate Heart of Mary, and St. Patrick, all in Galesburg, and Sacred Heart (Abingdon); Father Jeremy Freehill (St. Ann, Peoria); Father Geoffrey Horton (St. Patrick, Wapella); and Father Thomas Otto (St. Hyacinth and St. Patrick in LaSalle, as well as rector of Queen of the Holy Rosary Shrine).

The High School of Saint Thomas More in Champaign is getting a new chaplain. Fa­ther Andru O’Brien, who has served as parochial vicar of St. Jude Parish in Peoria since his ordination in 2018, will suc­ceed Father Michael Pica in that assignment as well as becoming parochial vicar at St. Mat­thew Parish, Champaign, and St. Boniface Parish, Seymour. Father Pica has been named parochial vicar to the LaSalle Catholic parishes.

The diocese is also welcoming two priests from Africa-based religious communities. Father Peter Okala, an Apostles of Jesus Missionary, will become parochial vicar of Epiphany Parish in Normal, while Father James Yeboah, a Society of African Missions priest, will serve as parochial vicar of the faith communities in Kewanee, Woodhull, Galva, and Cam­bridge.