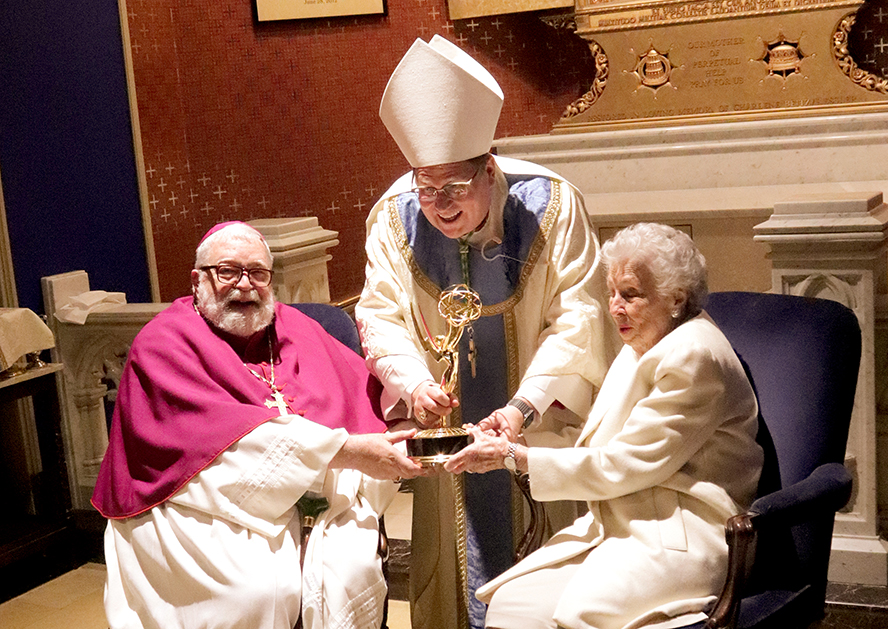 Joan Sheen Cunningham presents the Emmy Award won by Archbishop Fulton J. Sheen in 1952 to Bishop Daniel R. Jenky, CSC, left, and Coadjutor Bishop Louis Tylka, who presided at a Mass in front of Sheen's tomb on his birthday, May 8. (The Catholic Post/Jennifer Willems)

It is customary to give gifts to those celebrating birthdays, but in honor of Venerable Archbishop Fulton J. Sheen’s 126th birthday on May 8, his family presented a gift to the Sheen Foundation.

It was the Emmy Award for “Most Outstanding Personality” that was presented to the media pioneer and host of “Life is Worth Living” in 1952. Joan Cunningham Sheen, Archbishop Sheen’s closest living relative, offered the award to Bishop Daniel R. Jenky, CSC, and Coadjutor Bishop Louis Tylka after a Mass celebrated in front of his tomb at St. Mary’s Cathedral in Peoria last Saturday. 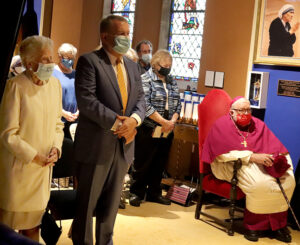 Bishop Daniel R. Jenky, CSC, attended the Mass in honor of the anniversary of Venerable Archbishop Fulton J. Sheen’s birthday “in choro” on May 8. To his right are Joan Sheen Cunningham, and her son, Paul. The Mass took place in front of the Sheen tomb in St. Mary’s Cathedral in Peoria. (The Catholic Post/Jennifer Willems)

The Emmy was one of many treasures from Archbishop Sheen’s life given to the Sheen Foundation by Mrs. Cunningham and her son, Paul, during a recent visit to Peoria. (See related article.)

The Mass was a reunion of sorts, as nearly 30 members of the family came for the celebration and then continued the festivities with refreshments in the Bishop’s Residence next door.

Archbishop Sheen actually had more than one birthday, according to Msgr. Stanley Deptula, executive director of the Archbishop Fulton J. Sheen Foundation.

If asked when his birthday was, the sainthood candidate would have replied, “I was born May 8, 1895, above the family store in El Paso, Illinois,” said Msgr. Deptula, who gave the homily.

But Sheen likely would have added that his birthday was May 13, 1895, the day he was reborn as a son of God at his baptism.

“And he might say, ‘My birthday is also Sept. 19, 1920, when I was reborn as a priest of Jesus Christ,’ here in this cathedral, in that sanctuary, before that high altar,” Msgr. Deptula said. “Fulton Sheen celebrated his birthday as a priest.”

He told the small group gathered in the Lady Chapel at St. Mary’s Cathedral that Fulton Sheen had a deep identity as a priest, configured to Jesus Christ, the high priest. 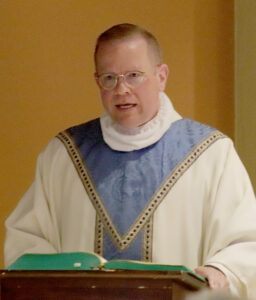 Msgr. Stanley Deptula, executive director of the Archbishop Fulton J. Sheen Foundation, said Venerable Sheen had several “birthdays” and perhaps the most important was Sept. 19, 1920, the day he was ordained to the priesthood at St. Mary’s Cathedral in Peoria. Msgr. Deptula gave the homily at the Mass on the anniversary of the sainthood candidate’s birthday on May 8. (The Catholic Post/Jennifer Willems)

“He was a priest from the soles of his black dress shoes to the top of his precious miter, and he lived that priesthood, proclaiming the good news, celebrating the sacraments, laying down his life for the people of God from the south side of this town to literally the four corners of the world,” Msgr. Deptula said.

Going further, he suggested that Sheen would say he say he celebrated his birthday every day.

Well-known for his daily Holy Hours, Fulton Sheen would be reborn “in an intimate encounter with his Creator, before the tabernacle of the church.”

Msgr. Deptula added that the Blessed Mother played a significant role in Sheen’s life. On the day of his ordination in 1920, he knelt before a statue of Mary and Jesus and promised that every Saturday, in a special way, he would honor Mary.

Bishop Tylka kept that tradition by leading everyone in the “Salve Regina” at the end of Mass instead of “Happy Birthday.”