“From darkness into Light”: Lexington parish responds in faith to church fire 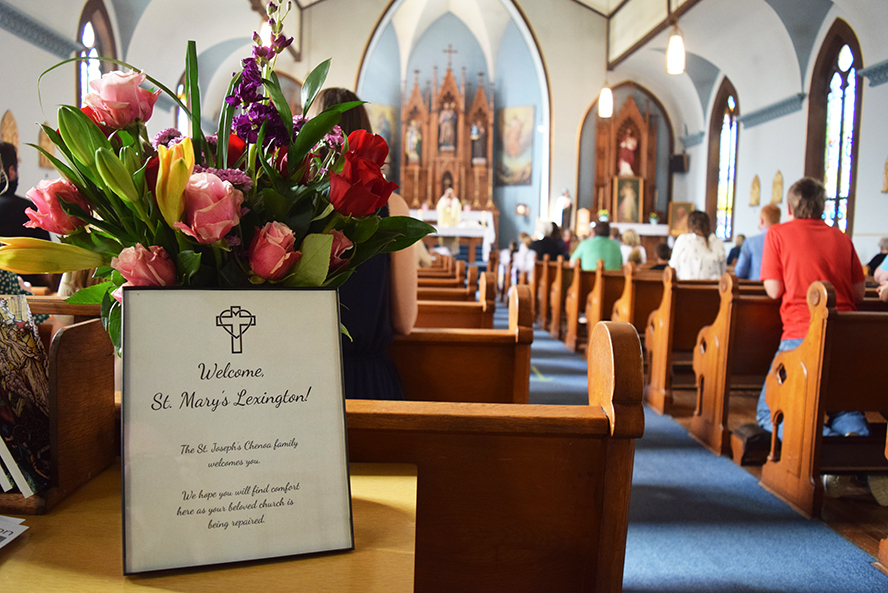 A bouquet of flowers and a welcoming message for the St. Mary, Lexington, faith community were placed at the entrance to St. Joseph Church the weekend of May 1-2. "We hope you will find comfort here as your beloved church is repaired," the sign reads. (The Catholic Post/Tom Dermody)

EDITOR’S NOTE: This is an update to a story originally posted on April 28.

LEXINGTON — The interior of St. Mary Church here will be dark for several months following an April 28 fire, but the light of Christ is shining all the brighter outside its walls through the faith-filled members of this parish.

“All of us here are called to be the light that shines in the darkness of this world,” said Father David Sabel, pastor, as he looked out at nearly 100 Lexington parishioners who gathered for Sunday morning Mass on May 2 at St. Joseph Church in Chenoa. The Chenoa church, located about 10 miles north of Lexington, will be the temporary home for the Lexington faith community during the restoration process. 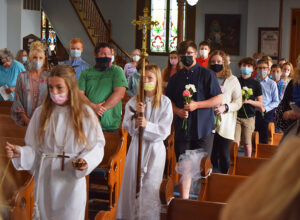 CCD students from St. Mary Parish in Lexington carry flowers to place by a statue of Mary at the opening of Mass on May 2 at St. Joseph Church in Chenoa. (The Catholic Post/Tom Dermody)

Father Sabel urged parishioners to also shine the light of Christ on the person or persons believed to have set the fire inside the nearly 125-year-old frame church at about 3 a.m. last Wednesday, causing extensive smoke and flooring damage.

The Lexington parish will continue its usual weekend Mass schedule — 4 p.m. on Saturday and 9 a.m. on Sunday — at the Chenoa church.

Father Sabel spoke on the theme of “from darkness into light,” and the mood at Sunday’s Mass was one of celebration following the previous days’ heartbreak.

A sign from the Chenoa parish welcoming Lexington parishioners to St. Joseph Church was placed with a vase of colorful flowers just inside the door. More flowers were carried forward in an opening procession by St. Mary CCD students as part of a May Crowning.

May 2 was also the scheduled day for the parish’s First Communion celebration, and there was no way the fire would keep Elizabeth McMahon, Myles Nasseri, Keagan Schott and Sydney Strating and their families from that faith milestone. 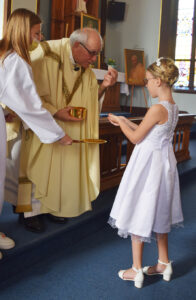 “This is the light that lasts forever,” said Father Sabel, “the eternal light of Christ they will be given in his precious Body and Blood. I want you to continue to go out there and be a light to the world in some way,” he told the First Communicants.

There was yet another reason to celebrate. May 2 was Father Sabel’s birthday, and doughnuts were served following Mass.

“IT’S GOING TO MAKE US STRONGER”

The First Communion class was taught by Christina Clark, who summed up parishioners’ feelings about the fire.

“It was very heartbreaking for our parish and our community,” Clark told The Catholic Post. “But to know our church is going to rise above this challenge is something that brings a new light to things. It’s going to make us stronger as a parish.”

She and Father Sabel expressed gratitude to the firefighters who responded to a 911 call at 3:24 a.m. on April 28 and fought through heavy smoke to extinguish the blaze. A total of 15 area fire units were eventually on the scene.

“I have to send them a ‘thank you,’” said Father Sabel. “They did a wonderful job.” 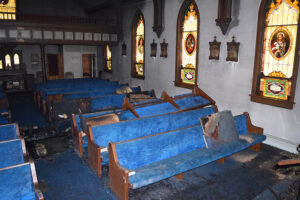 Charred pews, smoked-stained walls and holes in the flooring are seen following the April 28 fire at St. Mary Church in Lexington. (The Catholic Post/Tom Dermody)

The fire created a hole in the church’s center aisle, and firefighters cut other access holes to search for possible additional fires in the crawl space beneath the floor. While smoke damage was heavy, the outer structure was preserved, as were the church’s stained glass windows. Restoration estimates from the Catholic Mutual Group were not available by May 4, but the process is expected to take several months.

“On the outside you wouldn’t know,” said Clark of the beloved church at 201 N. Lee — just two blocks from the fire station. “We’re going to bring her back to her glory.”

No injuries were reported. The Blessed Sacrament was safely removed by Father William Keebler, parochial vicar, and taken to the church in Chenoa.

St. Mary’s Church was built in 1898 during the pastorate of Father M. O’Callaghan and serves more than 100 households. The parish is linked to the Chenoa faith community as well as St. Joseph, Flanagan, and Sts. Peter and Paul, Chatsworth.

More photos from the May 2 Mass have been posted to an album on The Catholic Post’s Facebook site.