The new rosary garden at Holy Family Parish in Danville is in the shape of a monstrance when viewed from above. It features a statue of the Holy Family in the center and the beads of the rosary on the walkway. (For the Catholic Post/Deb Edwards)

DANVILLE — What began with a tree to memorialize a beloved friend and parishioner blossomed into a rosary garden that will provide an “oasis for prayer” for Holy Family Parish and this community for years to come.

The garden — located on what had been a vacant lot at 444 E. Main St. south of the church’s parking lot — was blessed in memory of parishioner Nelda Keilholz following the 5 p.m. Mass on Saturday evening, May 1. Father Steve Loftus, pastor, called the garden a reflection of Nelda’s “own love for the rosary, her love for family, and her love for marriage.” It is also “a work of love” from her husband, Larry, and their six children, all of whom were present for Saturday’s blessing.

Father Steve Loftus, pastor, called the garden a reflection of Nelda’s “own love for the rosary, her love for family, and her love for marriage.” It is also “a work of love” from her husband, Larry, and their six children, all of whom were present for Saturday’s blessing. 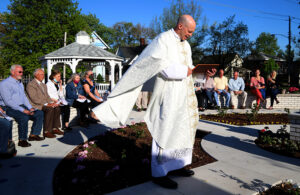 Father Steve Loftus, pastor of Holy Family Parish in Danville, blesses a new rosary garden built on a vacant lot south of the church’s parking lot during ceremonies following the 5 p.m. Mass on Saturday, May 1. (For The Catholic Post/Deb Edwards)

The couple’s oldest son, Greg, a former industrial landscaper who now resides in Tulsa, Oklahoma, designed the garden. Viewed from above, it is in the shape of a monstrance. Inside the garden’s walkway are a crucifix and embedded beads of the rosary. The garden also includes a gazebo and statues of the Holy Family, the Blessed Virgin Mary, and St. Peregrine, the patron saint of those suffering from cancer.

Larry and Nelda celebrated their 65th wedding anniversary on Feb. 12, 2020. Just three weeks later, Nelda died from ovarian cancer at the age of 86.

“She had great faith,” said Father Loftus, describing the Keilholzes as a “devout couple” who embodied the teaching of the family as the domestic church.

The couple were part of an “usher’s wives and friends” group that would go out for dinner after Saturday evening Masses. After Nelda’s death, members of the group quietly planned to have a dogwood tree planted in her memory.

Deb Edwards/Commercial-News Larry Keilholz makes the sign of the cross after a prayer during the dedication ceremony of the Rosary Garden built in memory of his wife Nelda who passed away in March of 2020.

With permission from the parish, talk of the tree soon turned into plans for a garden in the vacant lot, and Larry got involved.

“If it was going to be a garden, we wanted it to look like a garden and be beautiful, with as little maintenance needed as possible,” said Larry, who also has landscaping experience. He drew up plans. So did his son Greg.

“I picked his over mine,” said Larry.

In addition to the usher’s group, the Keilholzes were active in a rosary group that meets at the church every Monday evening to pray for cancer patients. Weather permitting, the group will now pray the rosary near the garden’s St. Peregrine statue.

Saturday’s blessing ceremonies began with Marian hymns performed on a portable organ by Jonathan Myers, music director, with his children Doug on horn and Emma on flute. The program concluded with a wine and cheese reception — the wine being from Missouri, where both Larry and Nelda were raised.

“We want to thank God, and thank the Keilholzes,” said Father Loftus.

EDITOR’S NOTE: More photos of the garden and the blessing ceremony have been posted to an album on The Catholic Post’s Facebook page.