Sister Cor Marie, SSND, has lived up to her name for 70 years of religious life 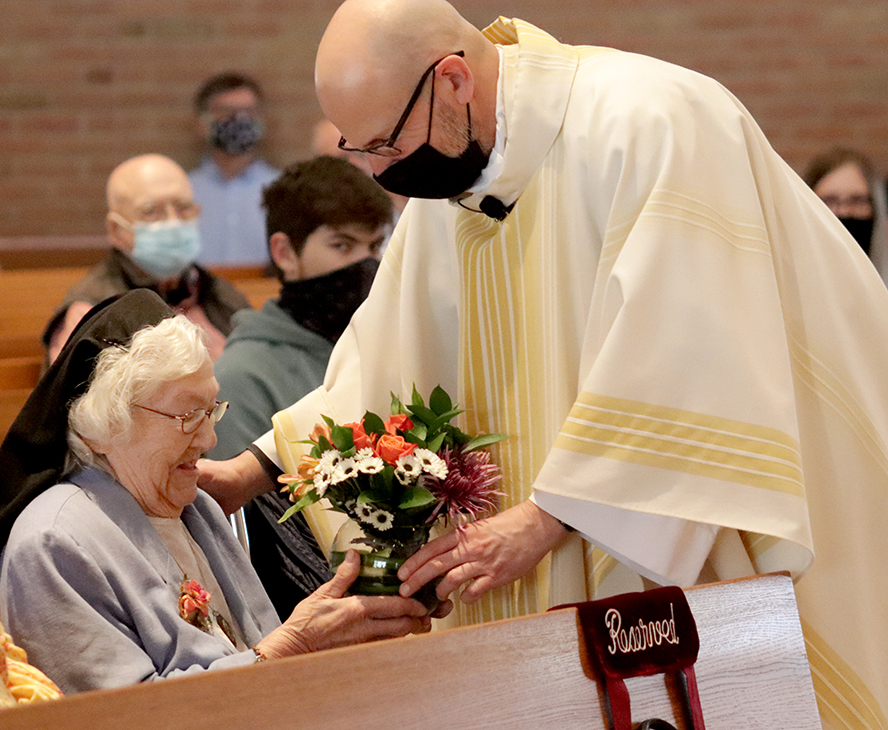 Father Chales Klamut presents a flower arrangement to Sister Cor Marie Cielocha, SSND, who renewed her vows and received a blessing from him at Mass on April 25 at St. Anthony Church in Bartonville. (The Catholic Post/Jennifer Willems)

BARTONVILLE — Sister Cor Marie Cielocha would have been satisfied to teach as a member of the School Sisters of Notre Dame for 25 or even 40 years. Instead the Lord gave her 70 years and she couldn’t be happier.

“I’m grateful — grateful to God that he let me teach the little children,” she said before renewing her vows at St. Anthony Church on April 25. “By being with them, you become one like them. The children are God’s great gift to us.”

And Sister Cor Marie has been a great gift to St. Anthony Parish and the Diocese of Peoria, according to Father Charles Klamut, pastor. 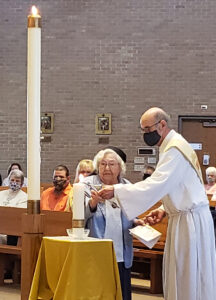 With help from Deacon Louis Tomlianovich, Sister Cor Marie Cielocha, SSND, lights a candle from the paschal candle after renewing her vows. The candle was a gift from the members of St. Anthony Parish in Bartonville, where the 70th anniversary Mass took place. (Provided photo/John Darling)

The celebration of her 70th anniversary took place on Good Shepherd Sunday, and Father Klamut said that was an appropriate title for Sister Cor Marie.

“She specialized in helping the kids who were poor and marginalized, who weren’t getting a lot of shepherding in other realms of their life, who maybe were being given up on by others,” he said during his homily. “She didn’t give up on them.”

That meant being tough on them sometimes, said Father Klamut, who takes Communion to her on Fridays.

“But I know, deep down in their hearts, they knew the voice they were hearing was not simply the voice of Sister Cor Marie,” he said. “It was the voice of Jesus, the shepherd, and that’s why they responded.”

As she renewed her vows of consecrated celibacy, Gospel poverty, and obedience to the School Sisters of Notre Dame and the church, she said, “I intend to do, in Mary’s spirit, whatever (Jesus) asks me to do for however long he asks me to do it.”

With the help of Deacon Louis Tomlianovich, she lit a candle from the paschal candle. After an extended round of applause from the parishioners, she received a blessing from Father Klamut, who said she lived up to her name: the heart of Mary.

Born and raised on Chicago’s Northwest Side, Sister Cor Marie was one of John and Martha Cielocha’s 11 children. She knew from a young age that she wanted to be in consecrated life and she entered the School Sisters of Notre Dame — “one of the greatest orders of teaching Sisters in the world” — in 1948.

She made her first profession of vows on July 31, 1951, and her final profession on July 30, 1957, both at the motherhouse in Milwaukee, Wisconsin.

Sister Cor Marie earned a bachelor’s degree in history and sociology from Mount Mary College in 1960. A master’s degree in education from Cardinal Stritch University followed in 1967.

Her first assignments were as a teacher at St. John Kanty and St. Mary Czestochowa in Milwaukee, and at St. Michael, St. Helena of the Cross, and St. Margaret of Scotland in Chicago. She came to teach at St. Patrick School in Peoria in 1967 and has been in central Illinois ever since.

From 1969 to 1985, Sister Cor Marie served as associate professor and supervisor of the child development program at Illinois Center College. As director of religious education at St. Monica Parish in East Peoria, she wrote a curriculum for the students there, too.

Her longest ministry was at the Children’s Center of Tazewell County, which she founded and would lead from 1985 until she retired in 2017.

“I’m grateful — grateful to God that he let me teach the little children. By being with them, you become one like them. The children are God’s great gift to us.”

At her jubilee celebration at St. Anthony Church, Sister Cor Marie credited the School Sisters of Notre Dame for giving her the approval and support she needed to start the school, which served children who needed a little extra help with reading and other issues. She said it was something she never anticipated, but proved to be a great blessing for her, as well as the students.

There have been miracles, too. That’s what she calls the four children she took into her home as her sons and daughters over the years. Among them is Franklin Lane, who accompanied his “mom” to the April 25 Mass, along with his wife, Janie.

“Today what you see in front of you is the result of the gifts that God gave me,” Sister Cor Marie told her fellow St. Anthony parishioners and friends, who also supported her education mission.

“I am not denying that there are many more of you in this parish that can do things 10 times better than I, but that doesn’t count,” Sister Cor Marie said. “What does count is that we love Jesus and become saints.”