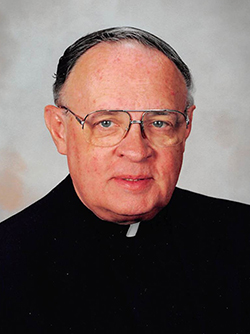 ODELL — A funeral Mass was celebrated at St. Paul Church here on May 3 for Msgr. William Watson, a senior priest of the Diocese of Peoria who served as pastor of St. Thomas the Apostle Parish in Peoria Heights for 34 years.

Visitation took place at St. Thomas the Apostle Church in Peoria Heights as well as St. Paul Church in Odell.

Coadjutor Bishop Louis Tylka was celebrant of the funeral Mass, with Father Thomas Taylor as homilist.

“One of the things that attracted people to Father Watson was his accepting nature,” said Father Taylor, who served with Msgr. Watson for 12 years at St. Thomas. “He knew we were all sinners and in need of Christ’s mercy and forgiveness, but he always chose to look for the best in people, and help them to use their strengths for the benefit of the whole community.” (Click here for the full text of the funeral homily.)

FROM ODELL TO THE PRIESTHOOD

In a 2015 interview with The Catholic Post, Msgr. Watson said he thought about being a priest from a young age. His parents went to daily Mass. “The church was almost as much a part of our life as our home was,” he recalled, resulting in close contact with parish priests and the Springfield Dominican Sisters.

After high school, he was accepted as a seminarian for the Diocese of Peoria. He attended St. Bede Preparatory Seminary in Peru for two years and graduated from St. Mary of the Lake Seminary in Mundelein in 1962.

He was ordained a priest of the Diocese of Peoria on June 3, 1962, by Bishop John B. Franz at St. Mary’s Cathedral in Peoria.

His first parish assignment was as parochial vicar at St. Joseph Catholic Church in Rock Island during the pastorate of Father Frank Casey. He also taught religion at Alleman High School.

In 1969, he was assigned to St. John’s Catholic Newman Center at the University of Illinois in Champaign, where he assisted Msgr. Edward Duncan until 1981. For 24 semesters, he taught a Marriage and Family Life class for an average of nearly 100 students.

34 YEARS AS PASTOR IN PEORIA HEIGHTS

In 1981, Msgr. Watson received his first assignment as pastor. It would also be his last. He guided St. Thomas the Apostle Parish — one of the largest parishes in the diocese — until his move to senior status in 2015.

His 34 years at the Peoria Heights parish saw dramatic growth in its physical plant. He oversaw an addition to the south side of the school in 1995. The present church was built and dedicated in 2001 while preserving the original church. The former convent was renovated for parish offices and a new rectory was built, linked to the church by a skywalk.

Asked upon his retirement in 2015 how many baptisms or weddings he presided over in his more than three decades at St. Thomas, Msgr. Watson replied “I have no idea. We always have a lot.”

Known for his compassion, gentle leadership, and Irish wit, Msgr. Watson found joy in the support of parishioners, his brother priests, and the offering of daily Mass, which he called “the center of my life.”

He returned to his hometown of Odell following his transition to senior status.

The funeral Mass was livestreamed at watsonthomas.com, where it has been archived for later viewing.