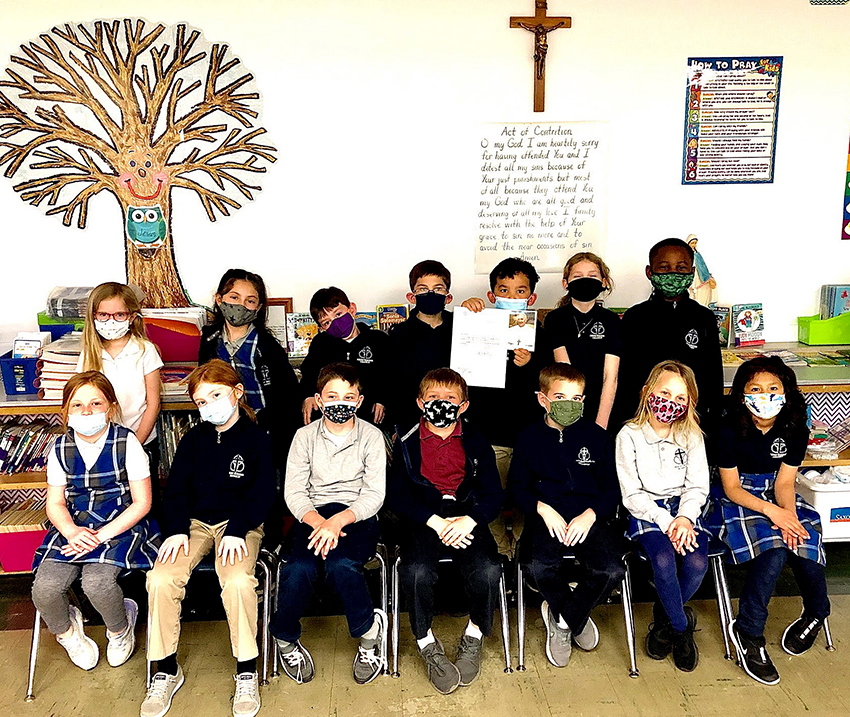 Students in Barb Crew's second grade class at Trinity Catholic Academy in LaSalle wrote letters to Pope Francis and received a reply on April 19 (being held by William Orteza). It came at a good time, since they were preparing to make their First Reconciliation that evening and had asked for the Holy Father's prayers. (Provided photo)

LASALLE — Second-graders at Trinity Catholic Academy had a little extra prayer support as they received the sacrament of reconciliation for the first time on April 19. It came in the form of a letter from Pope Francis himself.

Accompanying the letter, sent by Msgr. L. Roberto Cona of the Vatican Secretariat of State, was a photo of the Holy Father with an image of the Vatican flag on the back. The photo was inscribed simply as “Francesco.” 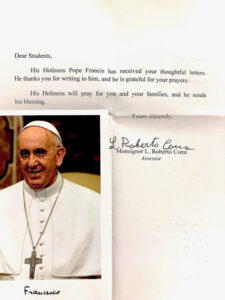 “One little girl said, ‘I’m going to go home and tell Mom that the pope wrote to us. I don’t think she’ll believe me,’” teacher Barb Crew told The Catholic Post.

The 14 students in her class at the LaSalle school had written to Pope Francis at the end of February as part of a language arts unit on writing letters. Crew said that learning correct form was part of the lesson, but she wanted the children to have meaningful exchanges, too.

In addition to the pope, they sent letters to their grandparents, a boy who is in the hospital in Colorado, and President Joe Biden, among others.

“Then I got inspired,” Crew said. “We were getting ready for reconciliation and I said, ‘You know, we should write to the pope!”

Together they researched what a pope is and what he does. They also studied the current pope with help from Crew, who had made a pilgrimage to the Vatican and was able to tell them how humble he is.

Then they started writing.

“The letters just wowed me,” said Crew, who added that she didn’t give the students too much direction. “I wanted their own words.”

Many of them told Pope Francis they were going to receive the sacrament of reconciliation for the first time soon and asked him to pray for them. Some said they were praying for him.

The letters were written by hand and the students drew pictures, too.

“When Pope Francis or someone from the Vatican saw it, I wanted it to look authentic, like a child sat down and wrote their thoughts,” Crew said.

“Dear Students,” the return letter starts. “His Holiness Pope Francis has received your thoughtful letters. He thanks you for writing to him, and he is grateful for your prayers. His Holiness will pray for you and your families, and he sends his blessing.”

“Mrs. Crew, he wrote us that letter. There’s power in his words,” the students told their teacher.

Before putting the letters in the mail to Vatican City, Crew shared some of them with principal Deb Myers. She told The Post she was impressed with not only the grammar and sentence structure, but the complexity of their thinking and the questions the 8-year-olds asked.

“It is just another one of those amazing opportunities in Catholic education to allow your students to bring the whole curriculum into their faith and their faith being included in the curriculum,” Myers said.

“And it becomes real for them. It’s not just a list of do this, don’t do that, go to church,” she explained. “Now it validates what it’s starting to mean to them to be Catholic.”

Myers has known Crew for about 35 of the teacher’s 45 years in Catholic education, and said, “Any child that has had Barb Crew as a teacher is truly blessed.”