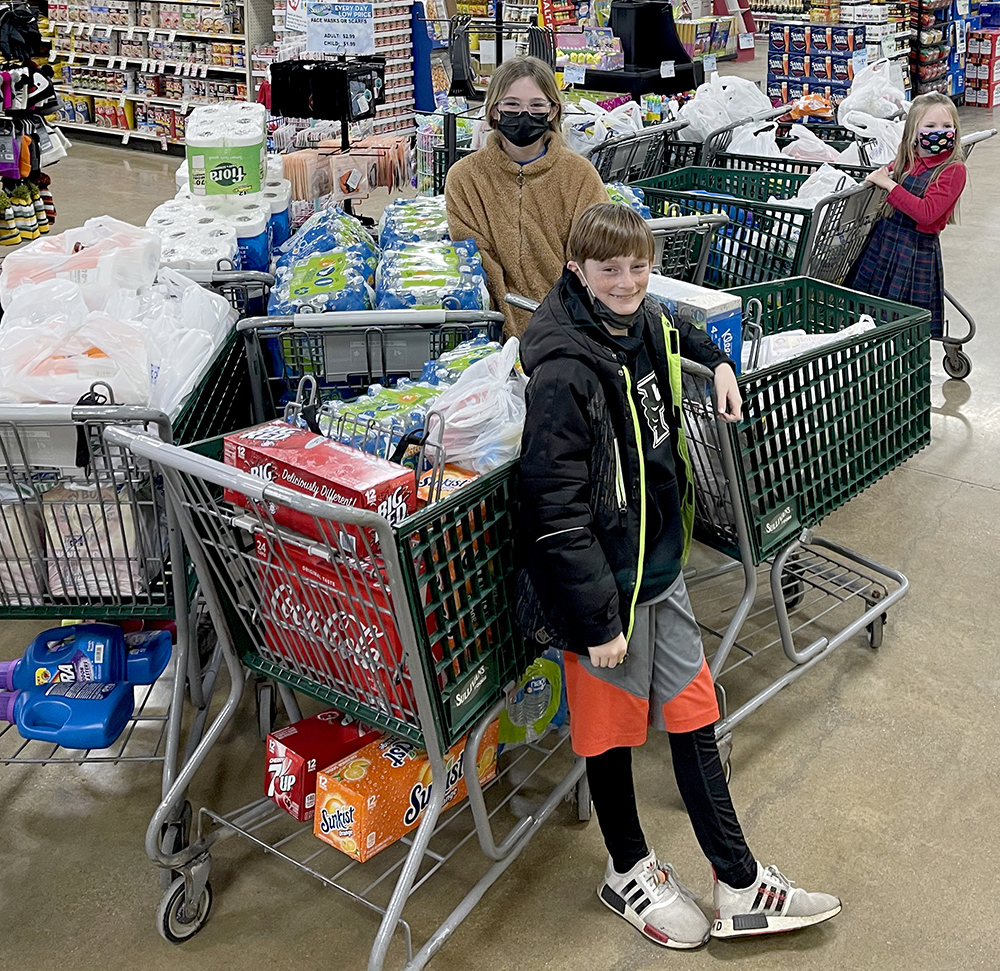 Mendota fourth-grader Cal Doyle poses with just some of the supplies he was able to buy with money donated by a local car dealership as part of the Lenten almsgiving challenge to help the homeless he proposed at Holy Cross School. (Provided photo)

MENDOTA — Cal Doyle had already said his prayers and gone to bed when he felt compelled to get up and find his mother, Laura. He was concerned about the homeless and wanted to do something.

“I honestly almost broke down in tears. It melted my heart,” said Laura Doyle, a fifth grade teacher at Holy Cross School in Mendota, where Cal is a fourth-grader. “He was so sincere.”

Turning his thoughts into action, he devised a Lenten almsgiving project that would collect donations of household supplies, nonperishable food items, and other goods for Illinois Valley PADS (Public Action to Deliver Shelter). Monetary contributions would also benefit the shelters in Peru and Ottawa so he welcomed those, too.

It didn’t take long for Cal to send an email to his principal, Anita Kobilsek, to see if it would be OK to ask the school community to take up the project for Lent.

“I always love it when the kids come up with an idea like this,” Kobilsek told The Catholic Post. “If it’s their idea it has more meaning.”

Not only did she approve, but Kobilsek put his flyer in the weekly information that is sent home to Holy Cross School families, as well as the church bulletin. 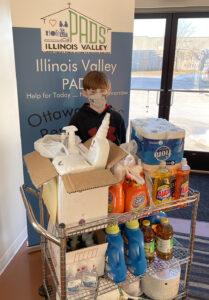 “So he’s not only gotten things from the school, but also the parishioners have been bringing things and putting them in the box at the back of church,” she said. “We put it on the school Facebook page and certain people have brought in things just because they saw it there.”

As the word spread, Schimmer Chevrolet Buick, a local car dealership, donated $1,000 to be used for items on the list Cal made after researching what the shelters needed most. The Mendota business also provided vehicles to transport what was bought back to Holy Cross School for sorting and distribution.

Those dollars went further because Sullivan’s Foods of Mendota gave them a 20 percent discount on everything they bought.

“I just want everybody to have the same life as a lot of people do,” said Cal, who has now been to both shelters and seen the need firsthand. That included children who were homeless and trying to keep up with their school work.

A few donations surprised him, like the number of adult socks they received. Garbage bags were also a popular item.

Another act of kindness came from his grandmother, Diane Haase of Ottawa, who bought fried chicken and french fries for everyone at the Ottawa shelter. That also benefited the local business that provided the meal, Laura Doyle said.

Cal said the way people responded made him feel good. And he’s learned a few things along the way.

“I learned that helping everybody can help you a lot in life,” he said. “It helped me a lot because now I feel much better that they have the stuff that I have, like they have food to eat. They know that someone has their back if they need something.”

He also knows God is behind it all.

“He helped because he created me. If he didn’t create me he wouldn’t have done this,” Cal said.

It doesn’t look like the Holy Cross fourth-grader, who loves social studies and math and playing second base for the Illinois Valley Predators, is done reaching out.

“Next year I’m thinking about doing the food pantry,” he said.

While most of the items that were donated have already been taken to the Illinois Valley PADS shelters, people may continue to bring things to Holy Cross School, 1004 Jefferson St., until Holy Thursday, April 1. For more information on the Lenten almsgiving challenge, contact Laura Doyle at ldoyle@holycrossmendota.com or look for Cal’s flyer on Facebook at Holy Cross Catholic Church & School — Mendota.