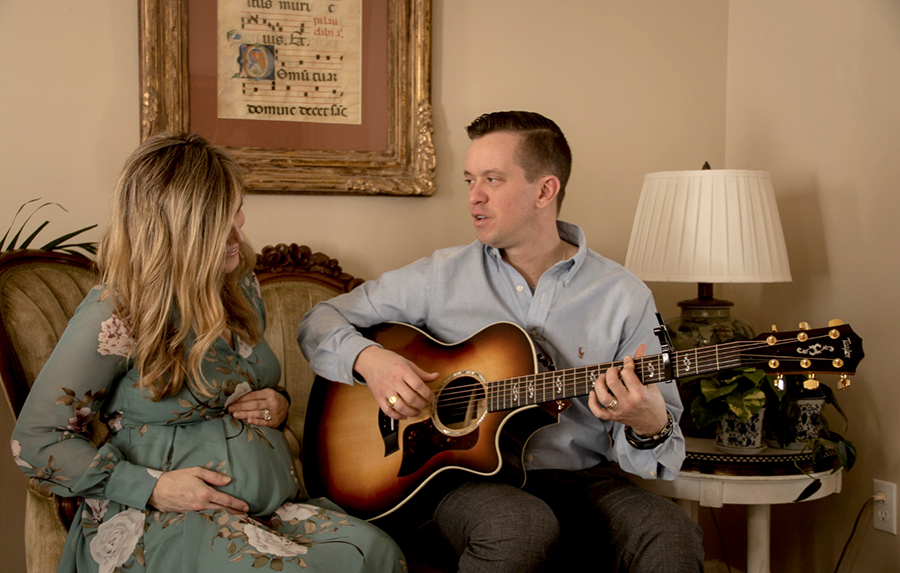 Knowing that babies in the womb can hear at around 18 weeks, Royce Hood wrote a song for his unborn son that uses the baby's heartbeat as its metronome and foundation. Here he sings "Fulton's Song" to the child and mother Elise. The YouTube video is embedded in our story below. (Provided photo)

Even though he hasn’t been born yet, Fulton Joseph Hood of Dunlap has showered blessings on his parents, Royce and Elise, and five older siblings. He has also made friends around the world, who have joined the Hoods in praying for a miracle for this tiny miracle in the womb.

The prayers are needed because baby Fulton has Potter’s syndrome, which means he doesn’t have kidneys and there is very little, if any, amniotic fluid to surround him in the uterus. Without that, the lungs don’t develop either. 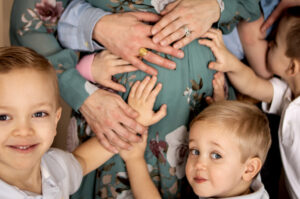 Elise and Royce Hood shared the life-limiting prognosis for their unborn son, Fulton Joseph, with their five other children, who have made it a habit to hug him in the womb and talk to him. “They love their brother just like they love each other,” said Elise. (Provided photo)

The Hoods have been told there is only a 5 percent chance their son will survive after birth.

Don’t look for sad faces and gloom in the Hood household, however.

“There’s no question there’s a bit of an emotional roller coaster, but I’ve tried to really think about it as being grateful that the Lord has entrusted us with Fulton’s life. I’m grateful that we get to be stewards and caretakers of this precious life that God has given us,” Royce said. “We’re going to surround him by as much love and joy as we can for as long as the Lord gives us with him.”

“I don’t think either of us has dwelled on anything sad for too long,” added Elise. “For us, focusing on blessings and being grateful has really just helped bring about joy during a time that is difficult and sad.”

Helping them to stay focused has been their parish family at St. Jude Church in Peoria, including Father Patrick Henehan, pastor, and Father Andru O’Brien, parochial vicar. The couple said Sister Maria Christi Nelson, OP, principal of St. Jude School, has been part of their support system, too.

The Hoods received Fulton’s diagnosis following a 20-week sonogram and said their first reaction was shock. Royce added that he was determined to find a way to make things right.

“I don’t know if this is a guy thing, but I’m like if there’s a problem I want to fix it,” he told The Catholic Post. “OK, he’s got some challenges. We’ll figure this out.”

But before they could get very far, Father Henehan invited them to St. Jude. 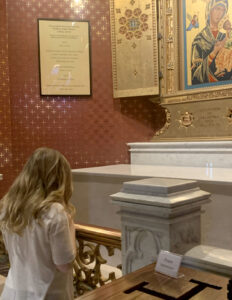 Elise Hood kneels at the tomb of Venerable Archbishop Fulton J. Sheen at St. Mary’s Cathedral in Peoria. She and husband Royce are asking people to pray for the sainthood candidate’s intercession for a miracle for their unborn son, Fulton Joseph, who has a 5 percent chance of survival after birth. (Provided photo)

“I’ll never forget that night at the church,” Elise said. “He gave us both Communion. We knelt in front of the altar and he gave us a special blessing. I really truly felt the Blessed Mother and Jesus — they were just so present.”

The Hoods said having that support from their parish priests was “amazing,” and added that it was Father O’Brien who suggested having people pray to Venerable Archbishop Fulton J. Sheen for his intercession on behalf of little Fulton Joseph.

Born and raised in Peoria, Elise knew about the El Paso native who would become a media pioneer and prolific author. She got reacquainted with Archbishop Sheen when she found some videos of “Life is Worth Living.”

“I think all you have to do is watch him one time and you’re kind of hooked,” she said. “He’s such a powerful speaker.”

Another voice in processing what they should do in terms of possible treatments for their son was Father Michael Orsi, chaplain at Ave Maria School of Law in Naples, Florida, where they met. He has continued to be a trusted adviser and spiritual mentor, the Hoods said.

The daughter of Dr. James Kenny Jr. and Jennifer Kenny, Elise attended St. Thomas the Apostle School in Peoria Heights and Notre Dame High in Peoria before going on to the University of Illinois and Ave Maria School of Law.

Royce is “a proud Florida native,” who married Elise on Nov. 24, 2012, and is happy to be living near her “wonderful Midwestern family.”

They have both been active in the pro-life movement, and Royce is a former board member for the National March for Life.

Acceptance turned out to be one of the hardest things to deal with, according to the couple, especially after they found out they didn’t qualify for a study in which they hoped to participate.

“We would do anything to fight for our children,” Royce said, but in the end that meant surrendering to what was best for their baby.

“That was the biggest struggle,” Elise told The Post. “Your child, especially this sweet little baby, you just want to help and your instinct is ‘How can we help you?’ 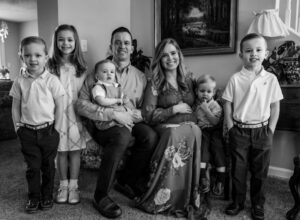 Royce and Elise Hood of Dunlap and their children. (Provided photo)

“Letting go of that and really just knowing that Fulton is God’s child and really just giving him to God and saying, ‘Your will be done,’ that was really difficult. But it truly also brought a lot of peace at the same time,” she said.

She also wanted to enjoy the pregnancy and enjoy having Fulton with them, said Elise as Fulton’s due date of March 31 approached.

Fulton’s siblings are Ava, 7; Gabriel, 6; Augustine, 4; Leo, who will be 3 this week; and Royce Aaron, 1. The Hoods told them Fulton’s prognosis right away so they would also have time to process the news and go through everything as a family.

They pray together every night, especially for a miracle for Fulton’s healing.

“I think they know that Fulton might not be here very long, so they’re very wise that way,” Elise said. “They want to make the most of every day.”

She called that joy in appreciating each moment together a blessing, as is the bond the children are creating with their unborn brother.

“For us, focusing on blessings and being grateful has really just helped bring about joy during a time that is difficult and sad.” — Elise Hood

“It’s just kind of a beautiful witness of faith really. They know and love Fulton and they can’t see him,” Elise said. “They love their brother just like they love each other. It’s beautiful.”

“WE WILL HOLD YOU”

There are little things that give the family great hope, Royce said. One of them is that after not showing any signs of significant weight gain for several weeks, Fulton had gained a pound as of Elise’s 37-week ultrasound on March 15 and now weighs 3.15 pounds.

“The bigger he is, the more mass he has, the longer he can be with us,” Royce said. “I think at the least it will be less stressful for his body.”

A musician since his teen years in Florida, Royce wrote “Fulton’s Song” to grieve and help him wrap his head around what has been happening.

“He was 20 weeks old when we found out he had Potter’s syndrome,” he said, adding that babies can hear at around 18 weeks. “I thought, ‘I need to write a song and sing to him how we feel about him and let him know how unique and special he is.’”

He incorporated Fulton’s heartbeat into the song, which became its metronome and foundation.

“We’ll surround you with all of our love,” the song promises. “We will hold you/until God takes you home.”

Another lyric says, “We want you to know you are a miracle.”

“No matter what, he is a miracle made in the image and likeness of God from the moment he was conceived,” Royce said. “If I could tell him that I would want him to know that.”