Every year since the Invest in Kids Act was passed in 2017, there has been an effort to eliminate or reduce it. This year is no different.

Gov. JB Pritzker included the program, which makes tax credit scholarships available for students in private schools, in a proposal to eliminate $932 million from the budget for fiscal year 2022. By cutting the tax credit given to those who make donations to these scholarship funds from 75 percent to 40 percent, he is hoping to generate an additional $14 million in revenue for general funds.

“The governor has classified this as closing corporate loopholes, which is absurd,” said Zach Wichmann, director of government relations for the Catholic Conference of Illinois. “This is not a corporate tax credit. It has nothing to do with corporations. It has to do with educating low-income and working-class kids. That’s really important.” 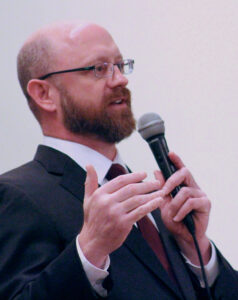 “This has to do with educating low-income and working-class kids. That’s really important,” said Zach Wichmann, director of government relations for the Catholic Conference of Illinois.

“It hurts kids and families at a time when we need to provide more stability and more certainty for kids and their education and their futures,” said Anthony Holter, president of Empower Illinois, a scholarship granting organization (SGO) that has been working with the 42 schools of the Diocese of Peoria.

“These proposed cuts do just the opposite,” he told The Catholic Post. “They create uncertainty and instability and that just isn’t good for kids and families . . . oftentimes families who are already making extraordinary sacrifices to choose these great private schools.”

The Invest in Kids Act was passed by the Illinois Legislature and signed into law on Aug. 31, 2017. It was authorized for five years.

The program allows individuals and corporations to make a donation to an SGO like Empower Illinois and receive a 75 percent credit on that amount when filing their state tax return. Donors may designate the school that will benefit from their gift.

The cap for any one donation is $1.3 million, with a total cap for the program of $100 million per year. That means up to $75 million in tax credits may be claimed per calendar year.

The first tax credit scholarships were awarded to qualifying students during the 2018-2019 school year. Over the last three years, there have been 4,964 applicants from the Diocese of Peoria and 1,363 awards, according to Empower Illinois, with $5.265 million raised.

“We’ve seen just an incredibly generous outpouring of support from donors for this program,” said Holter, who noted that $167 million has been raised statewide since the program started. About $130 million of that has come through Empower Illinois.

“Almost every single one of those dollars has been given by a hardworking, tax-paying Illinois resident, somebody who believes that through their charitable giving and philanthropy that they want to open the door to a better future by a scholarship to a private school,” he said.

When the program was threatened in 2019, the Catholic Conference of Illinois and Empower Illinois worked together to schedule legislative advocacy days so parents and school administrators could make their case in Springfield. Wichmann and Holter said that may not be possible this time due to COVID-19 protocols.

“It’s been very difficult. Our access to the legislature has been very limited at the present moment,” Wichmann said. When he talked to The Post, the legislators were holding virtual committee meetings. 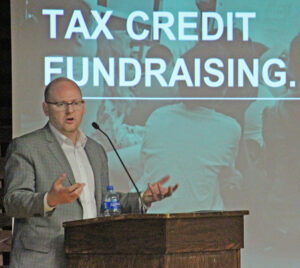 Dr. Anthony Holter, president of Empower Illinois, gives an overview of the Invest in Kids Act during a 2018 workshop for Catholic school leaders at Peoria Notre Dame High School. (The Catholic Post/Jennifer Willems)

“But we are still talking with some legislators and, of course, some of our leaders are in contact with some of their leaders,” he said. “We have allies in the legislature and we’re going to fight it. I feel optimistic that we’re going to defeat this effort as we have the last couple of years.”

Wichmann doesn’t expect the legislators to dig into the budget until late April or early May. It must be passed by June 1.

“We want them to focus on what is an incredibly difficult year in education right now and get through at least Easter,” Wichmann said. “Once we get past Easter, depending on where we’re at, we’re really going to engage the schools.”

Holter said Empower Illinois has started to “amplify” the voices of kids and families who are affected by this potential cut. One way of doing that is by talking up the program to neighbors, friends, and community leaders, as well as elected officials by whatever means are available.

Continued support by donors can also help to prove the value of the program, he said.

“Really the power of this program comes from the people who benefit most and that is certainly the kids and families who are in line and the schools that we know serve them so very well, and the donors who support it financially,” Holter said.

To learn more about the issues, Wichmann suggested people join the Illinois Catholic Advocacy Network (I-CAN) of the Catholic Conference of Illinois. This will provide updates on what is happening in the Illinois Legislature.