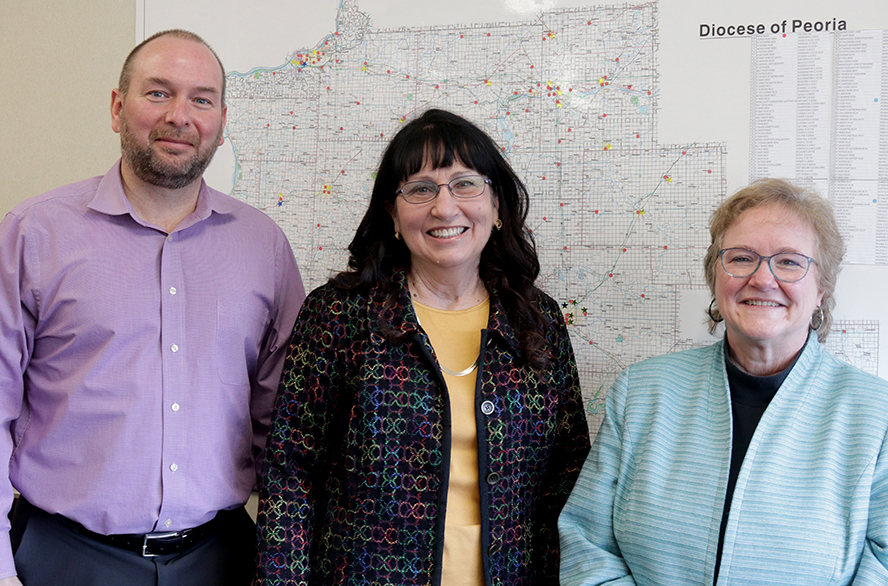 Dr. Susan Stolt, associate superintendent of Catholic schools for the Diocese of Peoria, is flanked by Russ Courter, diocesan director of parish and school finance, and Lynn Hutton, who works in the diocesan Office of Finance. They will assume fiscal responsibility for Catholic schools when Stolt retires on March 12. (The Catholic Post/Jennifer Willems)

Dr. Susan Stolt wasn’t looking for a job as financial services coordinator for the Office of Catholic Schools of the Diocese of Peoria. She was happy as the business manager at Costa Catholic Academy in Galesburg, where she served for six years.

The job came to her, so to speak.

Brother William Dygert, CSC, superintendent of Catholic schools at the time, asked if she would consider interviewing for the position. She was hesitant, but after talking to him she decided it was where she should be.

Her days of commuting to the Spalding Pastoral Center in Peoria are ending, however, as she starts to travel a new path known as retirement. Her last day with the Office of Catholic Schools is March 12.

“I’m just short of 15 years with the diocese — if I had stayed until October it would have been 15 years,” said Stolt, whose job evolved to make her associate superintendent of Catholic schools. “And I was going to try to make it, but I’ve been discerning and I just feel like God is calling me to go back to my role of mother and wife.”

With approval from Bishop Daniel R. Jenky, CSC, and Coadjutor Bishop Louis Tylka, fiscal oversight for diocesan schools will be under the supervision of Russ Courter, director of parish and school finance for the Diocese of Peoria. He is a certified public accountant who worked for Clifton and Gunderson for 27 years prior to joining the diocesan staff in 2015.

Lynn Hutton, who has worked in the diocesan Office of Finance since 2017, will assume many of Stolt’s responsibilities. She is also a CPA and worked in public accounting and private industry for 27 years.

“I can honestly say that I do not think I have ever worked with anyone who has been so committed and so detailed in their work. If she does not have an answer for a business manager or a principal or a pastor, she will ‘dig down’ until she finds one,” said Dr. Sharon Weiss, superintendent of diocesan schools. She and Stolt started together in 2012.

“Dr. Susan Stolt has truly been a good and faithful servant for the Church Universal and for the Diocese of Peoria.” — Dr. Sharon Weiss, diocesan superintendent of Catholic schools

“Her mind and skills are truly unmatched, too,” Weiss told The Catholic Post. “How many people do you know who have a Ph.D. in business and finance, and are also a CPA?”

In addition, she noted Stolt’s “quiet strength and faith.”

“She is deeply devoted to Jesus Christ and His Church, and I have watched her grow in her public witness throughout these past eight years,” Weiss said. “Dr. Susan Stolt has truly been a good and faithful servant for the Church Universal and for the Diocese of Peoria.”

Stolt began her journey in Chicago, where she attended St. Juliana School and was studying at Resurrection High School when her family relocated to Arizona.

She took her lifelong love of math to Northern Arizona University, where she earned a bachelor’s degree in accountancy in May 1973. Stolt would go on to Arizona State University where she received a master of business administration in May 1980 and a doctorate in philosophy in December 1985.

Married to Jim Stolt, former director of finance for the Diocese of Peoria, they have a daughter, Kristen Stolt, a foreign service officer for the U.S. Department of State, and a son, Father Kevin Stolt, IVE, parochial vicar at St. James Parish in Mount Rainier, Maryland. He is also dean of studies at the Institute of the Incarnate Word’s Venerable Fulton J. Sheen House of Formation.

The Stolt family lived in Arizona and North Dakota before coming to Galesburg, where Jim Stolt worked as chief financial officer at Cottage Hospital. He joined the staff of the Diocese of Peoria as an internal auditor in 2008 and was named director of finance in 2012. He retired in 2015.

Susan Stolt said she is looking forward to doing things with Jim, including travel. Their daughter will be posted to Denmark in June and they hope to visit her when COVID-19 restrictions ease.

Another destination on their list is Hawaii, which would give Jim Stolt his 50th state visited. Susan has already reached that milestone, but is happy to return.

Stolt will still miss the people she has worked with, including those in the schools she has visited as part of teams that helped them with strategic planning and continuing efforts to build Catholic identity, academic excellence, and financial viability.

While picking a favorite isn’t possible, Susan Stolt said she just loves the beauty of nature.

“The mountains are so impressive — and the wildlife,” she told The Post. “God has blessed us with so many things that I think we sometimes don’t stop and see.”

She trusts that God is taking her into retirement now and that what comes next is in his hands. Stolt will still miss the people she has worked with, including those in the schools she has visited as part of teams that helped them with strategic planning and continuing efforts to build Catholic identity, academic excellence, and financial viability.

Stolt added that she has been “fortunate and honored and blessed” to chair the committee that awards the Spalding Scholarships. Nearly $8 million have been given through the needs-based scholarships that are part of the Rooted in Faith Capital Campaign.

She offered special thanks to Bishop Jenky and Bishop Lou, Patricia Gibson, chancellor, and Msgr. Philip Halfacre, vicar general, and Dr. Weiss “for setting the bar high.” Stolt also expressed gratitude for the cooperation and teamwork of everyone in the Office of Catholic Schools, as well as the diocesan staff.