High schools discuss mission, how to integrate faith throughout the day 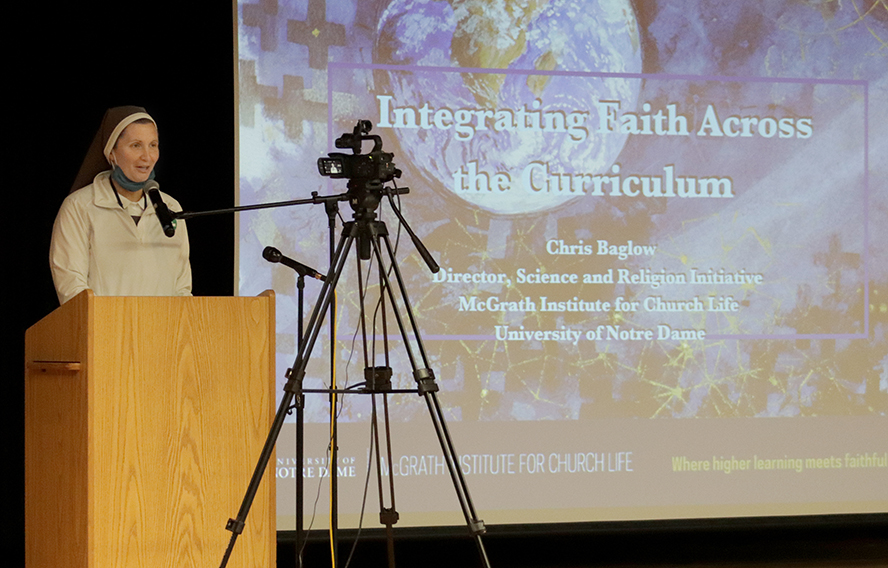 Sister Sara Kowal, SCTJM, principal of Notre Dame High School in Peoria, welcomes those who are attending the Institute Day presented by the school and the McGrath Institute for Church Life at the University of Notre Dame. The event was offered in person and virtually on Feb. 12. (The Catholic Post/Jennifer Williems)

People tend to think the “Catholic” in Catholic education refers only to theology class, campus ministry, or prayer before all other classes. Educators across the Diocese of Peoria and beyond dug deeper, however, during a daylong discussion that took place virtually and in person on Feb. 12.

“Science and Faith at the Crossroads: Catholic Academic Integration” was held at Peoria Notre Dame High School and made possible through a partnership between the school and the McGrath Institute for Church Life at the University of Notre Dame. 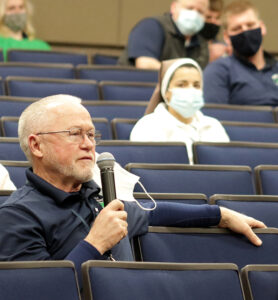 The Peoria Notre Dame teachers attended the keynotes and breakout sessions in person, while teachers and principals from the other Catholic high schools in the Diocese of Peoria, as well as Miami, St. Augustine and Orlando, Florida; Phoenix, Arizona; and Chicago were invited to tune in from where they were.

The same was true for the speakers. Some of them came to Peoria for their presentations and others led their breakout sessions remotely.

In whatever way they “arrived” at the Institute Day, everyone shared the same mission ultimately, according to Sister Sara Kowal, SCTJM, principal at Peoria Notre Dame

“It is to impart the Gospel in various ways and various forms holistically across our Catholic schools,” she said.

“More than anything I appreciate the wholeness of our faith. It’s not just about teaching theology but there’s a holistic nature to the Catholic faith,” Sister Sara told The Catholic Post, noting that the event was a longtime dream come true. “Our faith is integrated into everything we do because God is the creator of the world.”

Joining them as the day began was Coadjutor Bishop Louis Tylka, who celebrated Mass and welcomed the participants.

As someone who attended Catholic schools, the bishop said he knew the richness of Catholic education. He is also aware of the challenges.

“One of the biggest challenges from my perspective as a priest and as a bishop is to make sure our schools have a Catholic identity — that we know our purpose, that we know we are here in order to make disciples,” Bishop Tylka said.

The mission is to bring people to Jesus so Jesus can change their lives. Then they can go out and change the world, he told them.

“That’s why days like this are so important, because it helps to ground us in our common mission,” Bishop Tylka said.

Setting the tone for the Institute Day was Christopher Baglow, who teaches theology at the University of Notre Dame and is director of the McGrath Institute’s Science and Religion Initiative. His topic was “Integrating Faith Across the Curriculum.” 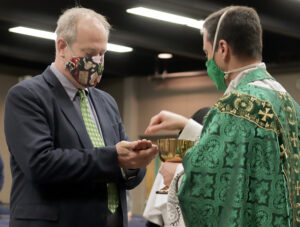 Christopher Baglow, director of the Science and Religion Initiative of the McGrath Institute at the University of Notre Dame, receives Communion from Father Corey Krengiel, chaplain at Peoria Notre Dame High School at the opening Mass for an Institute Day at the school Feb. 12. (The Catholic Post/Jennifer Willems)

The Vatican Congregation for Catholic Education defines a Catholic school as “a synthesis between faith, culture and life, reached by integrating all the different aspects of human knowledge through the subjects taught in the light of the Gospel, in an atmosphere characterized by the search for truth.” In no way does that pit faith against the search for truth, Baglow said.

“Christ has called us to search for truth everywhere it can be found,” he said. “In claiming us for his own, God has not taken away from us the adventure of discovery. He has done the exact opposite — he has set us free for that adventure and holds us responsible for undertaking it.”

“In the light of the Gospel” is a way of seeing that embraces all disciplines. Baglow calls this a light that shines from behind the eyes and not one that shines on the eyes from the outside.

That doesn’t mean every class becomes religion class, Baglow explained, but that subjects are taught with attention to the “big questions” the Gospel answers: Who am I? What does it mean to be human? What is the meaning of reality? Why is this object of study good, true, and beautiful?

The breakout sessions allowed participants to talk about how this can be accomplished in a variety of disciplines.

“Science and Religion: The Myth of Conflict” was the theme for the keynote talk given virtually by Stephen M. Barr, president of the Society of Catholic Scientists and professor emeritus of theoretical particle physics at the University of Delaware. Many of the points he raised were from his book, “Modern Physics and Ancient Faith.”

“Not only has religion and Christianity — and the Catholic Church in particular — been a great friend of science and played a very positive role in its history, but the things discovered by science, especially in the 20th century, contrary to what many people think, have actually in many ways tended to agree with some fundamental religious ideas about the universe and our place in it,” Barr said. 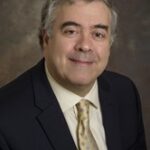 For example, atheists would say the evidence suggests that we’re a “cosmic accident,” a fluke in a universe that’s totally without purpose, and we’re not meant to be here, Barr said.

“But in the last few decades physicists have become increasingly aware that many features of the fundamental laws of physics and the structure of the universe seem to be just right to make existence of life like us possible,” Barr said. “If certain things had been even slightly different about the laws of physics, then we wouldn’t be here.”

Presenting science and religion as being in two warring camps arose only in the 19th century, according to Barr.

“In the first few centuries of modern science the scientific people and the religious people were the same people. Virtually all of them were devout Christians,” he said.

“Isaac Newton spent as much time in theological and scriptural study as he did on physics and mathematics,” Barr said. “All of them saw their work as showing the beauty of God’s creation rather than supporting atheism.”

He added that a large number of Catholic priests made major discoveries in areas such as geology, math, astronomy, genetics and theoretical physics.

“The Catholic Church’s record is really quite astonishing and glorious when it comes to contributions to science,” Barr said.