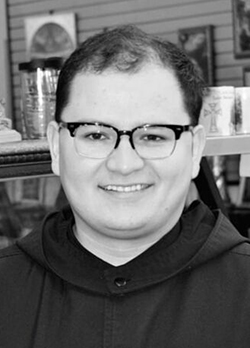 LASALLE — A Mass of Christian Burial was celebrated Feb. 22 at St. Patrick Church here for Brother Marion “Daniel” Sanchez, OSB, a LaSalle native who was a Benedictine Brother of St. Bernard Abbey in Cullman, Alabama.

Brother Marion died unexpectedly on Feb. 16 at the rectory of St. Mary Parish in Milaca, Minnesota. He was 29.

Father Thomas Otto was principal celebrant of the funeral Mass. Burial was in St. Bernard Abbey Cemetery in Cullman.

Born Nov. 25, 1991, in Spring Valley to Armando and Maria (Lattin) Sanchez of LaSalle, he graduated from St. Bede Academy in 2010 and then entered the Immaculate Heart of Mary Seminary in Winona, Minnesota. In 2012 he joined the Benedictine community in Cullman. He served as retreat center director and as director of the Ave Maria Grotto.

He was preceded in death by his paternal grandparents, Roberto Sanchez and Maria D. Flores.