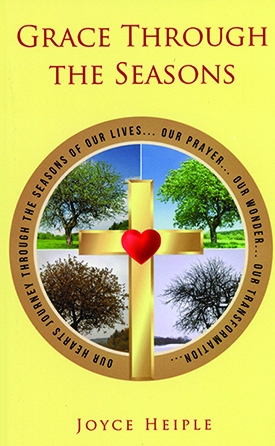 GERMANTOWN HILLS — Joyce Heiple knows well enough by now that if God wants something, she’ll get the message if she’s willing to listen. That’s what she hopes her new book, “Grace Through the Seasons,” will help others do, too.

She’s so attentive to God’s grace because “it’s what’s made me who I am,” she explained. 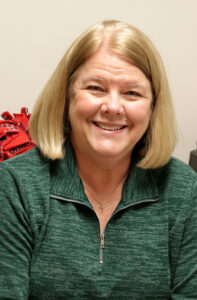 Joyce Heiple is a spiritual director who has played the organ at St. Mary of Lourdes Parish in Germantown Hills since 1976.

Heiple defines grace as “God’s presence in my life” and said, “It’s who I am. I wouldn’t be alive without God’s grace.”

While many authors hope for good sales, Heiple has a different goal.

“I just hope it touches people in a way that they become awakened,” she told The Catholic Post. “Everybody knows they have God’s grace in their life, I think, but I think we take it for granted. So I hope the little things in the book awaken them to God’s grace.”

Heiple’s first book signing is scheduled for Saturday, March 13, at Lagron-Miller Company, 4517 N. Sterling, in Peoria. Books and bookmarks will be available at the event, which is planned for 11 a.m. to 1 p.m.

THE HAND OF GOD

Some of the grace-filled memories she shares in the small paperback published by Covenant Books are playful, such as when she crawled out a second-floor window and it closed behind her when she was 3. As she was walking around on the roof below, someone saw her and called the fire department.

“Do you think God had a hand in taking care of me? I do,” Heiple writes. “He was indeed a present grace in my young life.”

Other memories are harder to write about, such as her father’s alcoholism and infidelity — issues that would surface in her own marriage. She shares how a growing reliance on God and what she and her husband learned in Cursillo helped them to repair their relationship and move on in ways they could never imagine.

She credits Cursillo for the healing that brought Deacon Rob Heiple to the permanent diaconate and ordination on May 18, 2002. He serves St. Mary of Lourdes in Germantown Hills and St. Mary in Metamora, and she has played the organ at St. Mary of Lourdes since 1976.

Heiple received her husband’s permission to share their story, although there was some concern that parishioners would look at him differently.

“I said, ‘If they really read it they’ll see the transformation that happened in your life and they’ll admire you. They’re not going to think badly of you because you made some mistakes when you were 30,” she said.

Heiple uses that unflinching honesty to pose questions to readers throughout the book, so they can consider the times and ways God has been present in their life, too. She doesn’t wait until the end of a chapter to invite them to “listen and pray as you reflect,” but as questions come up.

Heiple defines grace as “God’s presence in my life.”

“If a thought popped into my mind, I was hoping it would pop into someone else’s, too — or that I could pop it in there,” she said.

While she put the project aside for a time, Heiple heard God asking her to finish the book when she was praying during a Cursillo weekend in January 2020. She completed the manuscript quickly and was looking for a publisher by March or April. The first 10 books arrived in December.

A teacher and school counselor for 29 years in the Germantown Hills School District, Heiple retired at 55 but it didn’t take.

“I missed the kids terribly,” she said. She started subbing at St. Mary School in Metamora and would return to the classroom as a second grade teacher for three years. She continues to serve as a tutor.

Heiple is also well known for her workshops and spiritual talks, and is a spiritual director.

In everything, listening is the important part, she said.

“I think people need to quiet themselves long enough to give God a chance to get in,” Heiple said. “It’s not as if you’re going to hear him knock on your door and say something bold to you, but he definitely knows how to get a message across.”