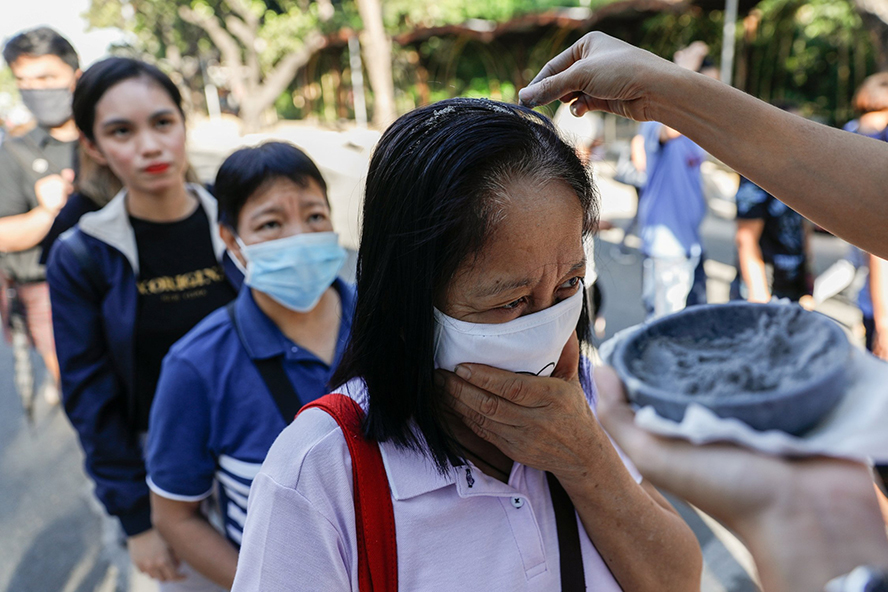 The distribution of ashes by sprinkling them on the head is seen during Ash Wednesday Mass at the National Shrine of Our Mother of Perpetual Help in Manila, Philippines last February. The Vatican Congregation for Divine Worship and the Sacraments has issued a note on how priests can distribute ashes on Feb. 17 while taking precautions to avoid spreading COVID-19. (CNS/Reuters)

Practicing the faith during a pandemic has required equal amounts of creativity and flexibility as people continue to seek out encounters with God. That will be needed again as Catholics approach Ash Wednesday on Feb. 17 and a new way of receiving ashes.

To minimize physical contact between those who are receiving ashes and those who are distributing ashes, the Vatican Congregation for Divine Worship and the Discipline of the Sacraments is asking that ashes be sprinkled on the head rather than traced in the sign of the cross on the forehead. 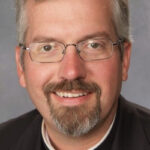 As another safeguard, the note on “Distribution of Ashes in Time of Pandemic” says the priests are to bless the ashes and then say, just once, either “Repent, and believe in the Gospel” or “Remember that you are dust, and to dust you shall return.” Then ashes are to be sprinkled without saying anything.

While this may be new to those in the United States and other English-speaking countries, it is common in Italy and other parts of the Catholic world, according to Msgr. Philip D. Halfacre, vicar general of the Diocese of Peoria and pastor of St. Michael the Archangel Parish in Streator and Sts. Peter and Paul Parish in Leonore.

“We’re doing the same thing that is being done elsewhere, but we’re doing it for health reasons,” he told The Catholic Post. “It’s not like something new has been introduced, but it will seem new to people because of the way ashes are being imposed.”

Msgr. Halfacre said many people may not like it and will likely feel grubby having ashes on their head.

“The ashes are not intended to be some sort of badge of honor, but that I am receiving ashes as a mark of penitence,” he explained.

“One of the ironies of Ash Wednesday is every year the Gospel says, ‘When you are fasting do not look gloomy like the hypocrites.’ We are actually called not to have some of those external things,” said Msgr. Stanley Deptula, pastor of St. Matthew Parish in Champaign and St. Boniface Parish in Seymour and former director of the Office of Divine Worship. 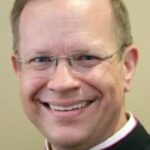 “So the idea that our hair might get messed up — I like the idea that we might be a little grubbier,” he said. “It really is a call for an internal conversion and maybe it makes us think of that even more this year because it is so different.”

Msgr. Deptula said it’s all part of the creativity and flexibility that has been called out of the church throughout the last year.

“Here we are again. It calls for creativity and flexibility on the part of every pastor and the part of our people,” he said. “It may not be part of what they’re used to, it might not even be their preference, but it’s a call to go deeper, be more creative, more flexible in the way we practice our faith.”

He admitted that he would miss that one-on-one moment with each person, where he looks into their eyes and says, “You are dust and unto dust you shall return” or “Turn away from sin and be faithful the Gospel,” which is at the heart of Lent.

Msgr. Halfacre said the use of ashes goes back to the Old Testament, where they symbolized mourning, mortality and penance. The fathers of the church even talked about how penance was tied to the roughness of sackcloth and the squalor of ashes.

He noted that in the Middle Ages people who were about to die were placed on a piece of sackcloth and sprinkled with ashes and told, “Remember that you are dust and unto dust you shall return.”

A Day of Ashes was mentioned as far back as the eighth century in the Gregorian Sacramentary, Msgr. Halfacre said, and in 1091, Pope Urban II recommended that ashes be sprinkled on both clergy and laity as Lent began. 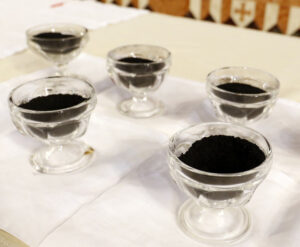 Glass cups containing ashes are seen on an altar between Ash Wednesday services. (CNS/Gregory A. Shemitz)

“Men received ashes having them sprinkled on the crown of their head and women received them on their foreheads, presumably because their heads were covered,” he told The Post.

The Roman Missal for Ash Wednesday notes that the priest places the ashes on the head, but doesn’t direct how that is to take place, he added.

Even though Ash Wednesday is not a holy day of obligation, people place a high importance on being in church that day — and not just Catholics, Msgr. Halfacre said. “Absolutely anybody can receive ashes. Absolutely anybody.”

Bishop Daniel R. Jenky, CSC, said he looks forward to the time when the pandemic ends and the normal practice of public witness resumes.

In the meantime, “prayer, fasting and almsgiving are the three most ancient Lenten practices and those can continue during quarantine,” he said.