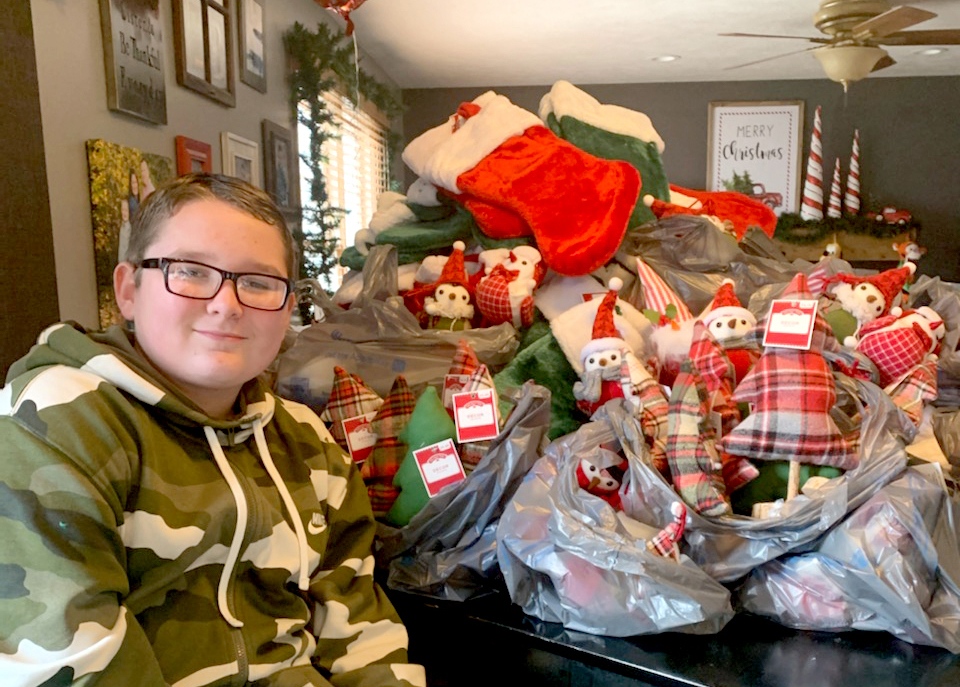 With a donation from an out-of-school sponsor, Bryce Smeltzer was able to buy enough stockings and small gifts for 100 residents at a nearby retirement community so they would know they were not forgotten at Christmas. Helping were parents Michael and Shannon Smeltzer and younger brother Lucas. (Provided photo)

BLOOMINGTON — When Bryce Smeltzer gets bored he doesn’t look for trouble. He gets creative. Good thing, too.

A burst of creativity last fall enabled the Corpus Christi sixth-grader to provide 100 stockings filled with small gifts for the residents at Westminster Village, a retirement community just across the street from the Bloomington school. The gifts were made possible by an out-of-school sponsor.

Bryce didn’t stop there, however. He got his fellow students in junior high to write letters and cards to their neighbors at Westminster, sharing a few things about themselves, and they’ve already heard back from some of them.

“I know a few of the people asked to be pen pals,” he told The Catholic Post.

“It was awesome because everybody helped so much,” Bryce said. “We could never have done this without the cooperation of everyone. My parents, my family, did so much and they encouraged me to do some things.”

In fact, parents Michael and Shannon Smeltzer, and younger brother Lucas helped to pick out what would go into the Christmas stockings, removed tags and assisted in filling them.

“He’s always thinking of others . . . In the classroom he’s the first to help. In study hall, he’s the first to go and help someone else study for a test.” — Mary Stratman, religion teacher, Corpus Christi Catholic School, Bloomington

“He’s always thinking of others and not just in Builders Club,” said Mary Stratman, referring to the school’s service club. A junior high religion teacher, she is co-moderator of the club.

He also has a servant’s heart that is feeling a bit stifled by the restrictions of COVID-19, she said. While students can start attending Builders Club meetings in fifth grade, they don’t become really active until the sixth grade.

“Even as a fifth-grader, Bryce would be over in the corner and his mind would just be racing,” Mrs. Stratman said. “After the meetings he would tell me some ideas he had.”

Because outreach is difficult at this time, the club is largely inactive this year, “but he’s finding his own way,” the teacher said.

When Bryce heard that some of the people at Westminster couldn’t leave their rooms or see their families due to the pandemic, he knew he had to do something for Christmas “to help them feel like we’re thinking of them.”

In the past, the students have visited for Veterans Day, decorated for Christmas and played games with the residents, which Bryce enjoys.

“All of us have so much fun,” he recalled. “I like to listen to them and learn a little bit about them.”

When it came to his Christmas project, just talking it out with Mrs. Stratman wouldn’t do. He created a PowerPoint presentation to make his case. She forwarded it to principal Adrienne Wilson, who approved it.

“I just love doing service,” he told The Post. “When I’m bored, that’s what I think about.”

Bryce said the Christmas project turned out pretty well. The only disappointment was not being able to see the Westminster residents in person.

“I knew I couldn’t get my hopes all the way up because there was no way we could have seen them. That was the only thing that did not go to plan,” he said. “But I could tell by how many thank-you cards there were that everybody was pretty happy.”

Bryce and his family are members of St. Patrick Church of Merna. When he’s not active with Builders Club, he likes to play football in the summer, basketball “if we’re allowed to participate in that,” and track and field. Shot put and discus are his events.