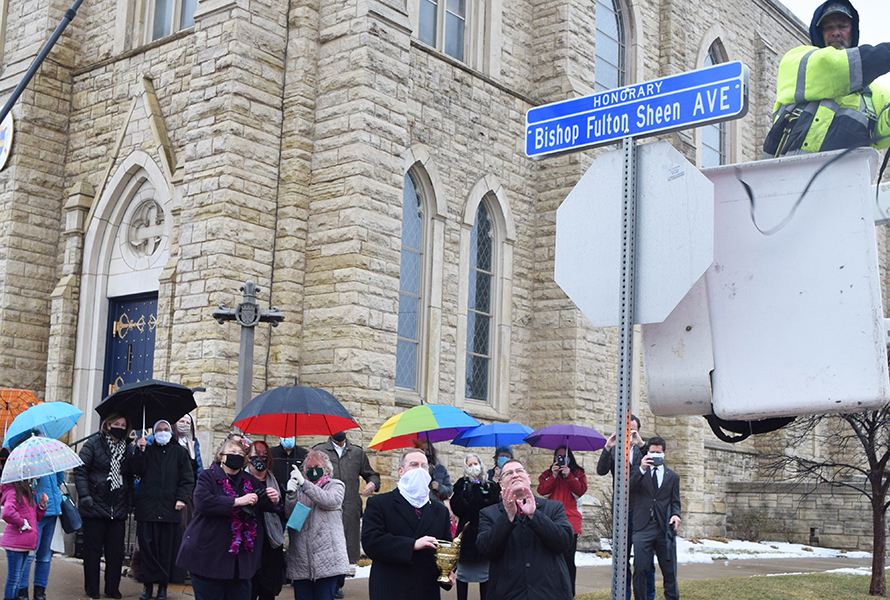 In a celebration blending religious and civic pride in one of Peoria’s most famous and influential historic residents, the street outside St. Mary’s Cathedral in Peoria was given the honorary designation of “Bishop Fulton Sheen Avenue” on Feb. 4.

“These were the streets where Fulton Sheen grew up,” said Msgr. Stanley Deptula, executive director of the Archbishop Fulton J. Sheen Foundation. He was among those offering brief remarks during an unveiling and blessing ceremony for one of four newly erected signs on a three-block stretch of Madison Avenue just north of the city’s downtown. 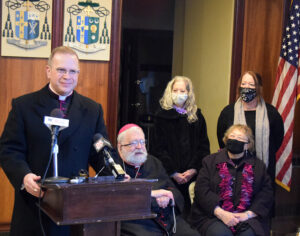 Msgr. Deptula noted that when the media pioneer and sainthood candidate was a boy, Archbishop Sheen’s family moved from a farm to the cathedral neighborhood so young Fulton and his brothers could attend its grade school and later nearby Spalding Institute.

St. Mary’s Cathedral would be the site where, in 1919, Archbishop Sheen was ordained a priest of the Diocese of Peoria. It is now where his remains are interred.

“And it is from these very streets that Fulton Sheen went on to change the world, not just the Catholic world, but the world, with a message that life is worth living,” said Msgr. Deptula, quoting the title of Archbishop Sheen’s popular television series in the 1950s.

Archbishop Sheen — also known for his many books and support of the church’s worldwide missions — died in 1979. Pope Benedict XVI approved his heroic virtues and declared Archbishop Sheen “venerable” in 2012. His remains were transferred from St. Patrick’s Cathedral in New York City to St. Mary’s Cathedral in Peoria in 2019 in anticipation of a future beatification.

“A GIFT TO THE WORLD”

Also speaking at the ceremonies were Bishop Daniel R. Jenky, CSC — who has promoted Archbishop Sheen’s cause for canonization for nearly two decades — and Peoria Mayor Jim Ardis. 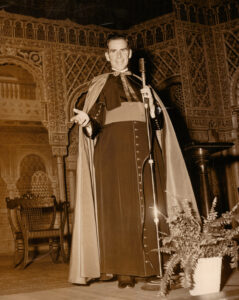 Archbishop Fulton Sheen is pictured in an undated file photo. (CNS photo/courtesy of the Pontifical Mission Societies in the United States)

“I am very proud that he comes from here,” said Bishop Jenky. “I am very happy that his remains rightly are interred in our beloved cathedral. And I know I join with all of you in praying that Archbishop Sheen will soon . . . be declared ‘blessed’” — the final step prior to canonization.

“On behalf of the city and across all faiths, it is so appropriate and humbling for us to be able to recognize a man of God who did so much, and whose works are still so unbelievably relevant,” said Mayor Ardis.

Because of a steady rain on a cold February morning, the remarks took place in the cathedral vestibule. 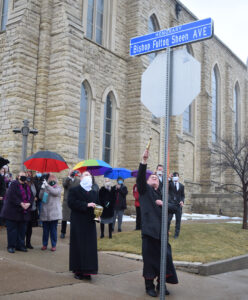 Those attending then went outside to the corner of Madison Avenue and Green Street, where one of the new street signs was unveiled. It was then blessed with holy water by Coadjutor Bishop Louis Tylka, who gave thanks for the life of Archbishop Sheen and asked God to “be the guide going before those who use this avenue and be the companion to sustain them on their way.”

Others in attendance included Dolores Sheen, a niece of Archbishop Sheen, who called the honorary street renaming “a wonderful tribute”; other city officials including at-large City Council member Sid Ruckriegel; and Rita Schwerer, a member of St. Vincent de Paul Parish in Peoria who proposed the idea of an honorary street sign to diocesan leaders more than a year ago.

The new signs have been erected on a three-block stretch of Madison Avenue from the Spalding Pastoral Center, 419 N.E. Madison, to the cathedral, 607 N.E. Madison.

EDITOR’S NOTE: More photos from the Feb. 4 ceremonies have been posted to The Catholic Post’s site on Facebook. A video of the ceremonies has been archived on the Diocese of Peoria’s Facebook site.