Mass for the Unborn: Now is the time to ‘live the Beatitudes, change the world’ 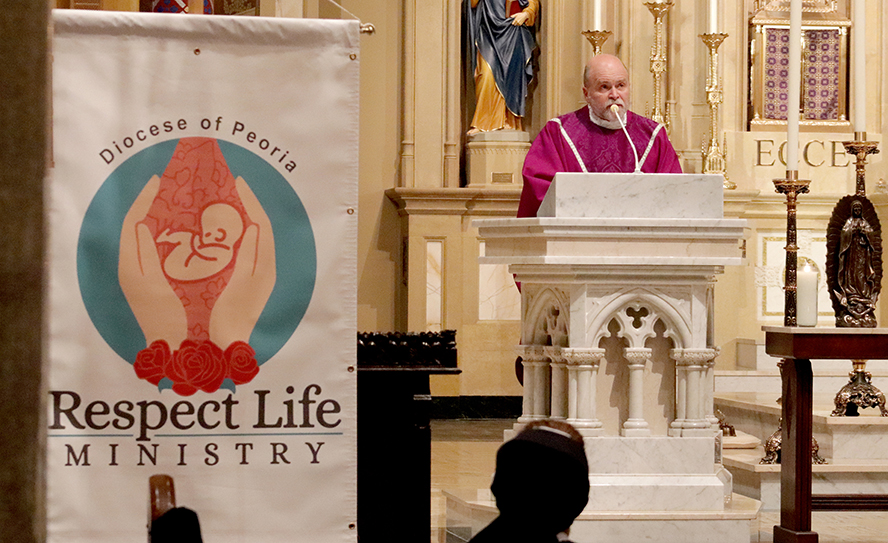 Father William Miller offers the homily at last year's Mass for the Day of Prayer for the Legal Protection of Unborn Children at St. Mary's Cathedral. High school students unable to attend the National March for Life in Washington, D.C., because of COVID concerns are invited to this year's Mass, which will be celebrated by Coadjutor Bishop Louis Tylka at St. Mary's Cathedral in Peoria on Jan. 21. (The Catholic Post/Jennifer Willems)

Mourning the lives ended by abortion, those who attended the Mass for the Unborn at St. Mary’s Cathedral in Peoria on Jan. 22 were encouraged not to give in to despair, but to trust that God hears and answers prayers.

“These times are giving us a great opportunity to live the Beatitudes; to change the world by allowing the Lord to change us — from the inside out,” said Father William Miller, vicar for respect life and rector of St. Mary’s Cathedral, in his homily. “We will be blessed and be a blessing when we put on the mind of Christ that shows itself in choosing to be humble, gentle, merciful peacemakers.”

This is not about retreating or being a “pushover,” he emphasized.

“On the contrary, this is to be truly countercultural with the strength that comes from above,” Father Miller said. 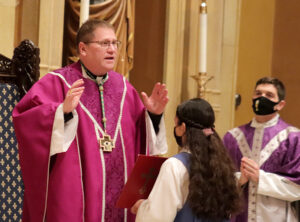 Coadjutor Bishop Louis Tylka offers the opening prayer for the Mass for the Day of Prayer for the Legal Protection of Unborn Children at St. Mary’s Cathedral on Jan. 22. (The Catholic Post/Jennifer Willems)

Coadjutor Bishop Louis Tylka presided at the liturgy, which was held on the 48th anniversary of the Supreme Court decisions that legalized abortion. It has come to be known as the Day of Prayer for the Legal Protection of Unborn Children.

Eucharistic Adoration, with the rosary prayed in English and Spanish, followed.

“This evening, the church gathers recognizing the sacred gift of life,” Bishop Tylka said as he greeted pro-life advocates from around the diocese, including a large group from St. John Paul II Catholic Newman Center in Normal. “God gives us the breath that we are called into being so we can be his servants, that we can spread God’s love.”

He called it a time to seek God’s pardon and peace “in our world, for an end to the scourge of abortion, and for a greater respect for life that only comes when we turn to the Lord and allow him to be our life.”

The banner of the Diocese of Peoria’s Respect Life Ministry was carried up the main aisle of the cathedral by Konnor Damery, a campus minister at Illinois State University, as the Mass began. Following him with two white candles, which were placed on a platform bearing the image of Our Lady of Guadalupe, were Sister Faustina Chesnut, OSF, and Sister M. Ignatia Cooney, FSGM.

Cecilia Soñé, director of Respect Life Ministry for the Diocese of Peoria, proclaimed the first reading from Philippians 4:6-9. Deacon Ed Mallow proclaimed the Gospel passage from Matthew 5:1-12a, “Blessed are the peacemakers, for they will be called children of God.”

Simultaneous translation into Spanish was provided by Sister Ana Pia Cordua, SCTJM, director of the diocesan Office of Evangelization and Faith Formation. 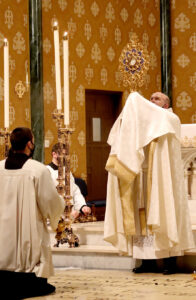 As Eucharistic Adoration comes to an end, Father William Miller raises the monstrance in blessing for those who attended the Mass and Holy Hour for the Day of Prayer for the Legal Protection of Unborn Children on Jan. 22 at St. Mary’s Cathedral. (The Catholic Post/Jennifer Willems)

Members of the Vargas and Nava families offered musical leadership for the Mass. They also do this on Sunday afternoons as part of the Hispanic Ministry Choir at St. Mary’s Cathedral.

The lights were dimmed in the church for adoration and the rosary. The English decades were led by Sister M. Ignatia, while the Spanish decades were taken by Father Julio Faes, parochial vicar at the cathedral and a member of the diocese’s Hispanic ministry.

Many of the people present would have participated in the National March for Life, Walk for Life Chicago, and the annual Respect Life Dinner and Sanctity of Human Life rally in Peoria that were scaled down or did not take place due to the pandemic.

“GOD WILL HAVE HIS DAY”

In his homily, Father Miller reminded people of a quote from Venerable Fulton Sheen, who said, “Evil may have its hour, but God will have his day.”

“Our thanksgiving rests on God’s faithfulness and sovereignty,” Father Miller said. “His mercy is bigger than all sin and evil put together.”

So while evil may seem limitless, it is not, he added.

“We know how the story finishes and so come what may in the meantime, we see the big picture and we pray with confidence, ‘Thy kingdom come, Thy will be done,’” Father Miller said.