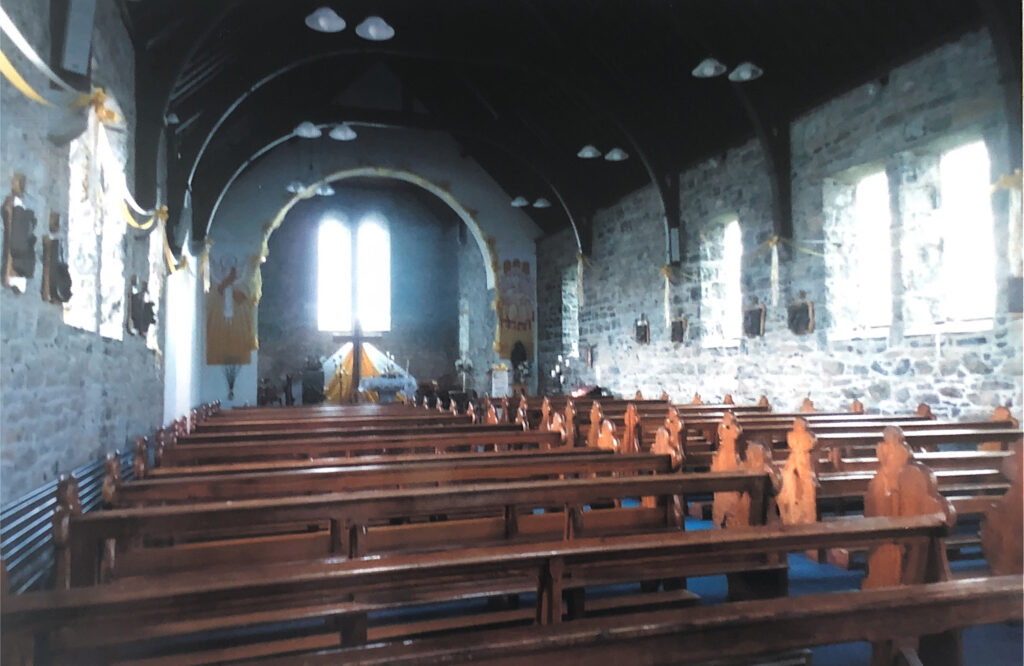 The interior of St. Brigid Church on Inishmore Island off the West Coast of Ireland.

Cause of Our Joy / Katie Faley

Kneeling in a tiny stone church only big enough to hold about 70 people, I saw the priest raise the bread above the altar and bells rang from behind him. I snapped to attention, finally finding my footing in a Mass that had me pretty lost.

I was studying abroad in the land of my ancestors during my sophomore year of college, and this particular Mass was celebrated in St. Brigid Church on Inishmore Island off the West Coast of Ireland. The entire Mass was said entirely in Irish, causing my confusion. Having been familiar with the words of the Mass, I was generally aware of what was being said, but after losing a bit of track somewhere in the Liturgy of the Word, coupled with the fact that there isn’t much similarity in language between English and the Irish language and the priest was speaking his native tongue so quickly, I couldn’t keep up. But when the priest lifted the bread and spoke the words of consecration, despite my misunderstanding of the language, I knew exactly what words were being said and what was happening before me.

That is one of the most profound and beautiful parts of our faith. In an unfamiliar language and a land far from the one I was accustomed to attending Mass in, I knew that those words and that moment marked a miracle of heavenly proportions that happens every single day all around the world.

TUNING IN TO MASSES ANYWHERE

Back in March of 2020, it came as an abrupt shock when all public Masses ceased. One Sunday I was sitting in the pews praying alongside the rest of the congregation; the next Sunday, I wasn’t.

The first few weeks of quarantine, I tuned in to the Mass at the parish I belonged to at the time. After that, it crossed my mind that I could have a bit of fun and tune in to any Mass that I wanted. I chose Mass at the Basilica of the Sacred Heart on the University of Notre Dame’s campus, a church in Australia I had never heard of before, and my beloved home parish — St. Mark in Peoria.

Before the pandemic, I often took for granted the experience of being united to other believers in the Eucharist. Looking around at Mass, I saw the same faces and exchanged the same smiles and conversation. It became commonplace that we all believed in the Catholic faith and wanted to be at Mass.

However, watching the Mass live on Facebook, or whatever other streaming service was used, I was very aware that I was not alone in seeking out the sacrament. Names on the screen made me aware that there were others — people I knew and people I didn’t — who were desiring the unity of the Eucharist and of our universal Church as much as I was. The Body of Christ extends throughout the entire world and we were created to be unified to each other through Jesus and His sacrifice.

A MIRACLE AT ANY GIVEN MOMENT

Of course, tuning in to the Eucharistic celebration via a screen is not the same as being in the True Presence of Jesus in the Eucharist. But it is nice to have a reminder that no matter what earthly circumstances arise that may separate us from the Eucharist, the beauty of believing in a universal Church means that somewhere, at any given moment, the body and blood of Jesus are being made present through the miracle of Transubstantiation.

In every language and in every corner of the world, Jesus is present and the gift of his sacrifice is memorialized. It is a gift that is both worldwide and eternal, and a gift for which I am so incredibly grateful.

I find peace in the fact that we belong to a church that is universal. We have been made aware this year of what it feels like to be distant from each other and distant from the sacraments. But, in spite of that distance, we are still all connected through the Body of Christ and Jesus is still present in the Eucharist throughout every corner of the world.

KATIE FALEY is a freelance writer and member of St. Mark Parish in Peoria. She has a master’s degree in theology and theological studies from the University of Notre Dame. Write to her at katiefaleywriter@gmail.com.