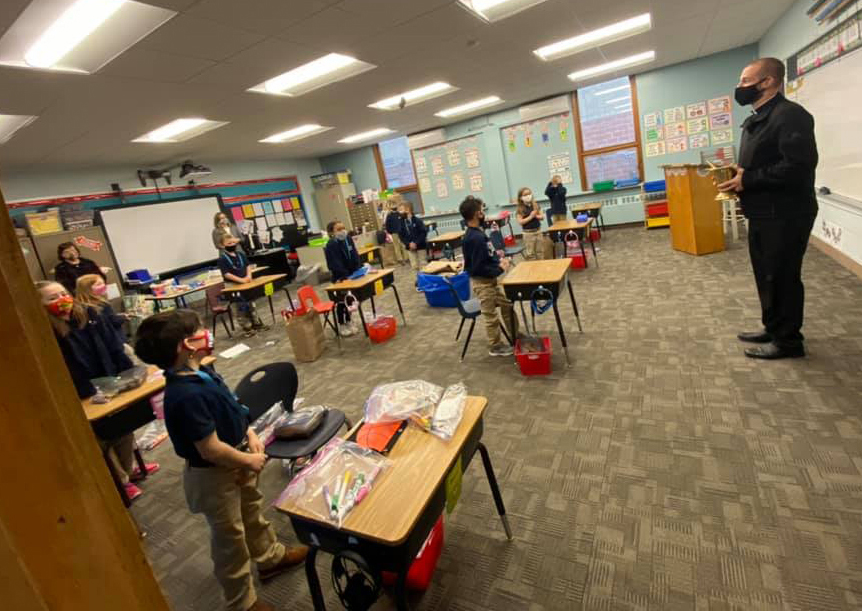 Students were welcomed back to in-person instruction at St. Mary School in Pontiac on Jan. 11. Each class was blessed by Father Adam Cesarek, pastor, and there were gifts and a complimentary lunch for the staff and an ice cream treat for the students. The Pontiac school was one of 11 Catholic elementary schools in the Diocese of Peoria to see an increase in enrollment in the last year. (Provided photo)

In an academic year made difficult by COVID-19, enrollment has provided another challenge for the 42 Catholic schools of the Diocese of Peoria.

According to enrollment figures submitted to the NCEA Data Bank for 2020-2021, there are 9,107 students in diocesan schools — a decline of 8.2 percent. That includes a drop of 193 students at the high school level and 619 students in the elementary grades or 812 across the system.

Preschool enrollment, the area that had provided hope over the last five years, experienced a decline of 329 students or 24.2 percent this year.

Jerry Sanderson and Dr. Susan Stolt, associate superintendents of Catholic schools, attributed the drop in preschool numbers to the pandemic and the uncertainty it caused in terms of how instruction would be delivered.

“Many principals were saying (parents) want to commit to coming to school . . . but if we have to close, where will they put their children,” Stolt said, recalling how Catholic and public schools went to remote learning last spring for the rest of the school year. “So many are opting for day care so they don’t have to face that because they’re concerned there wouldn’t be a day care to go to.”

“Hopefully a good percentage of those families will come back once the pandemic is over,” Sanderson said.

While there was an overall decline, Stolt said there were 11 elementary schools that either increased or held their enrollment steady.

“They’re not large increases for the most part, but the idea that some were able to maintain their enrollment, given this environment, I think that’s positive,” she said.

Among the schools seeing an enrollment increase was Schlarman Academy in Danville, which gained 35 students in pre-kindergarten through eighth grade.

The schools that had an increase of 10 percent or more were the elementary grades at Schlarman Academy in Danville and St. Mary in Metamora.

“Considering the economic challenges that the Danville area has had, going back 25 years or more, I think it’s very encouraging that even in the midst of a pandemic they’re able to increase enrollment,” Sanderson said of Schlarman, up by 14 percent in their elementary grades. “I think a lot of that is attributed to they have excellent leadership. I know Mr. (Mark) Janesky has done a lot to restore confidence in that community.”

“I think a big part of their enrollment increase was the grassroots effort that began two years ago to look at all facets of school planning from marketing to enrollment management to facility issues,” Sanderson explained.

“They made the decision to restructure to multiage (classrooms),” he added. “That enthusiastic support of the community in rallying behind their school, I think it contributed to this enrollment increase.”

High school enrollment is down across the board, but Central Catholic High School in Bloomington only decreased by one and at 320 students has the same enrollment as five years ago. 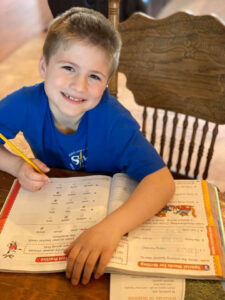 Third-grader Luke Grebner of St. Mary School in Metamora shows that remote learning can be fun. The Metamora school saw a 13 percent increase in enrollment in the last year. (Provided photo)

Sean Foster, principal, said the projection from five years ago put enrollment at 283 this year if they continued to do what they were doing. To turn that around, Central Catholic hired a full-time assistant principal, director of admissions and director of advancement and started to work with a consulting firm called Partners in Mission.

“They offer a variety of resources and they’re specifically for Catholic schools,” he told The Catholic Post. “When we originally worked with them it was to evaluate our advancement efforts and give us recommendations on basically what our next steps should be. . . . They also gave us a model that we followed that has really led to a lot of this success.”

He said having a supportive community has been another major factor in Central Catholic’s progress.

“Historically, the people in our community have been supporting Central Catholic and they’re the reason we are here. What we’ve learned to do is engage with them in a more meaningful way,” Foster said.

He added that they have a lot of work to do, but what they’ve seen so far is encouraging.

St. Bede Academy in Peru is under the governance of the Benedictine monks of St. Bede Abbey, so their enrollment information was not included in the diocesan figures.

According to Eve Postula, superintendent, enrollment for 2020-2021 is 274, which is down from 282 last year. She said this is largely due to COVID-19 travel restrictions that have prevented eight new boarding students from China to begin their studies at St. Bede.

The international students who left the U.S. at the end of the Spring 2020 semester are still enrolled in the school’s remote learning program.