Pandemic restrictions, but no limit on love in 2020 for Our Lady of Guadalupe 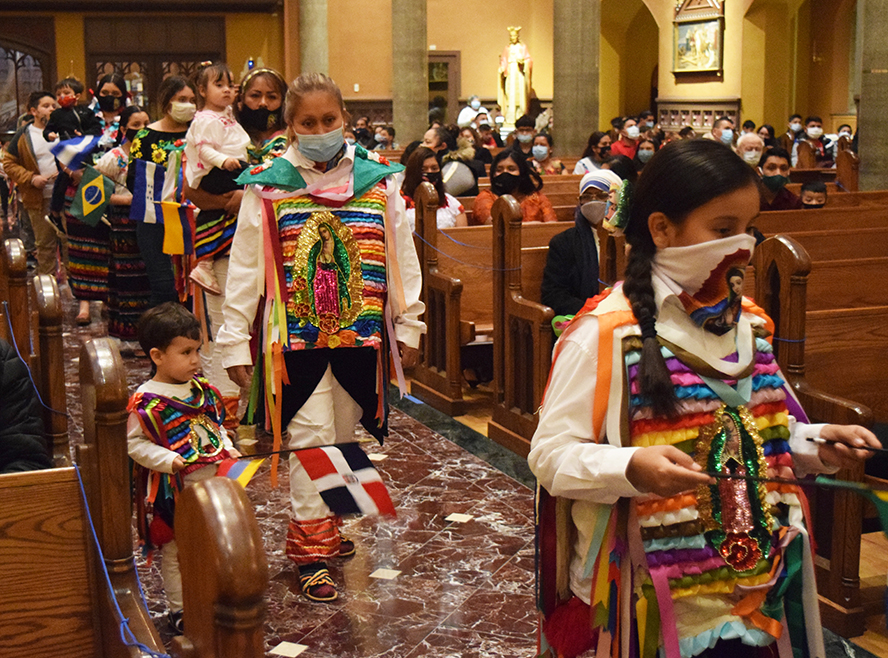 Women and children dressed in festive attire and carrying the flags of Spanish-speaking nations process into St. Mary's Cathedral in Peoria on Dec. 12 at the start of an evening Mass on the Feast of Our Lady of Guadalupe. (The Catholic Post/Tom Dermody)

The daylong celebration of the feast of Our Lady of Guadalupe at St. Mary’s Cathedral on Dec. 12 was capped by an evening Mass with two bishops present and confident prayers that Mary our Mother will not “let go of our hand in the midst of so many trials.”

The colorful costumes used in cultural dances and reenactments of the Blessed Mother’s appearance to St. Juan Diego in Mexico had a new accessory this year – face coverings. Safety concerns also necessitated social distancing and the elimination of an after-party with food.

But there was no limit on the love for Our Lady of Guadalupe expressed through song, repeated shouts of “Viva la Virgen de Guadalupe!” and dozens of flower bouquets left throughout the day at a replica of the Tepeyac hill in the cathedral sanctuary topped by her image. 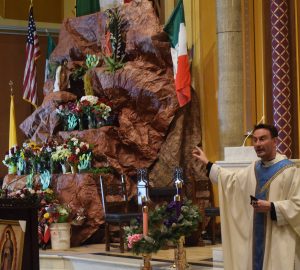 During his homily at St. Mary’s Cathedral in Peoria, Father Julio Faes, parochial vicar of the cathedral parish and associate director of Hispanic Ministry, points to a pilgrim image of Our Lady of Guadalupe atop a hill assembled in the sanctuary for the celebration. (The Catholic Post/Tom Dermody)

“This is our favorite pilgrim Mother of Guadalupe,” said Father Julio Faes of the image, parochial vicar at the cathedral parish and associate director of Hispanic Ministry. In his homily, he recalled that, since June, the image had been passed to the houses of more than 60 area Hispanic families.

“Not even the pandemic stops the love of the people for their Mother of Heaven,” said Father Faes, who preached in both Spanish and English. He called for “family unity” in the faith “because we have a mission to show the world the love of God, always with the help of our Mother in heaven who does not abandon us, but walks alongside with us.”

A FEAST FOR THE WHOLE WORLD

The cathedral celebration was one of several special observances of the feast throughout the diocese. All were modified to reflect health concerns, and at least one Mass was canceled.

Coadjutor Bishop Louis Tylka celebrated the cathedral Mass in Spanish. It was livestreamed on the Ministerio Hispano Diocese of Peoria Facebook page. Bishop Daniel R. Jenky was in choro. Music was led by a mariachi band, and the opening procession included children carrying flags of Spanish-speaking countries.

“It’s a very special feast for the whole continent, the whole world,” said Rosie Romero, diocesan coordinator of Hispanic Ministry, in remarks at the close of Mass.

She thanked the bishops for their presence and for the use of the cathedral for Masses and celebrations throughout the year.

“When Our Lady appeared, she asked for a place where her Son could be worshipped, a little house — a little casita — on the hill,” Romero told the bishops. “We are so happy we have not only a little casita, but a cathedral. It is a privilege that this is our home, and we’re very grateful.”

She also thanked the bishops for allowing the former St. Peter Church in Peoria to become a new St. Juan Diego Center. (See related story on this page.)

A family that took part in a reenactment of the Guadalupe story then came forward to present the bishops and Father Faes with bouquets of flowers to represent “our love, our hearts, and our fidelity.”

Romero also thanked the Spanish-speaking volunteers who assist in the ministry throughout the year.

“This is not only about this weekend,” she said. “Our Lady is very grateful for your support.”

While safety concerns meant there was no after-party, those attending the Mass were given tamales and hot chocolate as they left the cathedral.

Meanwhile, the Diocese of Peoria has announced that the former St. Peter Church at 2719 N.E. Madison Ave. in Peoria — closed and vacant since the parish was merged into St. Bernard Parish in 2013 — is being renovated and will be renamed the St. Juan Diego Hispanic Center. 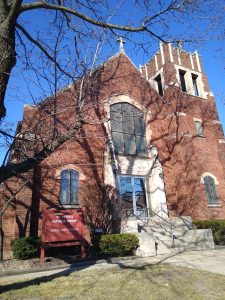 The former St. Peter Church in Peoria is being remodeled to serve as the St. Juan Diego Hispanic Center. (The Catholic Post/Tom Dermody)

“The idea is the St. Juan Diego Center will be a place for formation, meetings, retreats, and also cultural events,” said Rosie Romero, diocesan director of Hispanic Ministry.

Volunteers have already begun renovation work inside the church and its basement, which was formerly used as the parish hall.

A campaign called “Building Family Together” has been launched to recruit more volunteers as well as donors. Those interested in assisting are invited to call Mari Carmen Lopez at (309) 307-0589, Eli Ruiz at (309) 363-4620, or email Romero at rromero@cdop.org

On Sunday, Dec. 20, a fundraiser called “A Christmas with a Touch of Mexico” took place at the center.

At the Dec. 12 celebration of the feast of Our Lady of Guadalupe at St. Mary’s Cathedral in Peoria, Romero thanked Bishop Daniel R. Jenky, CSC, and Coadjutor Bishop Louis Tylka “for the new gift we have from your hands.”

“We are working very hard” on the renovations, she assured them, “and hopefully soon we will have the blessing” of the St. Juan Diego Center.