Groveland man recalls getting his Notre Dame diploma from a future pope, saint Timothy Gorman of Groveland, a member of Blessed Sacrament Parish in Morton, received his 1960 University of Notre Dame diploma in liberal arts from the future St. Pope Paul VI.

GROVELAND — Sometimes you don’t know you’re making history until you look back. In Timothy Gorman’s case it was way back to June 5, 1960, the day he received his diploma in liberal arts from a future pope and saint at the University of Notre Dame. In this file photo, Italian Archbishop Giovanni Battista Montini of Milan, the future Pope Paul VI, and Holy Cross Father Theodore Hesburgh, then president of the University of Notre Dame, shake hands in South Bend, Ind., in 1960. Timothy Gorman of Groveland would receive his diploma from Cardinal Montini later in the day. (CNS photo)

“Our great president, Father Theodore Hesburgh, had invited sitting U.S. President Dwight D. Eisenhower, who did the commencement address. It was awesome, a beautiful event on the main quad next to Alumni Hall,” recalled Gorman, a member of Blessed Sacrament Parish in Morton. “A solemn pontifical Mass was offered that morning, the celebrant being His Eminence Cardinal Giovanni B. Montini, Archbishop of Milan, Italy.”

Just three years later, Cardinal Montini would be elected pope and take the name Pope Paul VI. He succeeded Pope John XXIII and served as the chief shepherd of the Catholic Church until his own death on Aug. 6, 1978.

On that sunny summer day in 1960, however, he was a special guest of Notre Dame and would receive an honorary Doctor of Laws degree. He went on to assist in delivering liberal arts diplomas to more than 400 students.

“WE HAPPENED TO BE IN HIS LINE”

“Finnegan got into Notre Dame because he had a baseball scholarship. Dan and I got in because we were smart,” Gorman said with a laugh as he fondly remembered his friend.

“It was just luck. . . . We just happened to be in his line,” he told The Catholic Post about that long-ago graduation day. There was no real time for conversation with Cardinal Montini, so they kissed his ring and received a blessing. 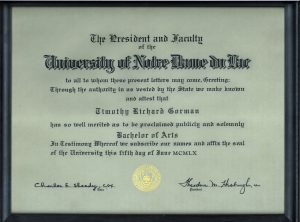 “He was a brilliant pope,” Gorman said. “I’ve read some of his writings and they were just unbelievable.”

With the education he received at the University of Notre Dame, he served briefly as an English teacher at Manual High School in Peoria. Most of his career was spent in product support at Caterpillar Inc., however. He retired after 33 years and has been retired for more than 20 years.

Gorman has been married to his wife, Judith, for more than 50 years. Their family includes a son and a daughter and four grandchildren.

When he was reading The Catholic Post dated March 4, 2018, and saw that Pope Paul VI could be declared a saint, he called Barthell and said, “It’s been awhile. You probably wonder. . . .”

“Dan promptly said, ‘St. Pope Paul VI. Hope you know where your diploma is,’” Gorman said. “Yes, we both know — on the wall. And Finnegan’s wife has found his.”