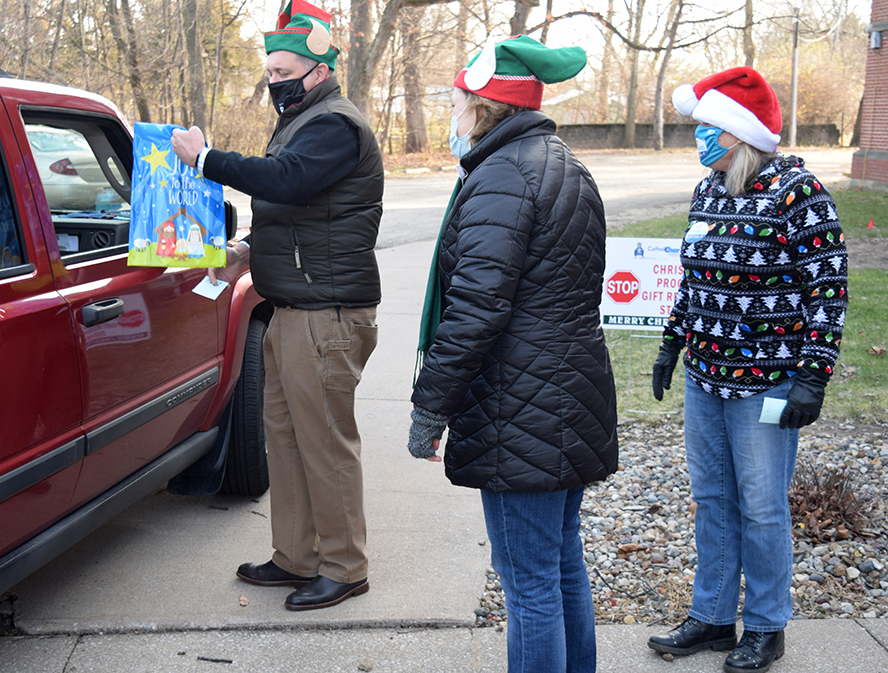 Each guest in Catholic Charities' Christmas Program received a bag of gift cards designed for their household and made possible with support from 33 parishes in the Diocese of Peoria. Distributing at the West Peoria campus Dec. 14 were Sid Ruckriegel, Stefanie Tarr, and Julie Enzenberger. (The Catholic Post/Tom Dermody)

There was a circle of charity flowing Dec. 14 at the Heading Avenue campus of Catholic Charities in West Peoria.

The campus was just one distribution point for Catholic Charities’ annual Christmas Project, which this year assisted about 360 families throughout the diocese and more than 1,125 individuals. 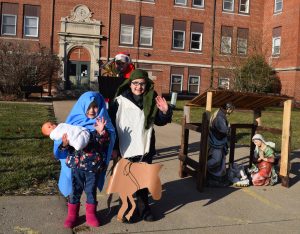 The guests were welcomed to the Catholic Charities’ campus by Catalina and Leo Gonzalez portraying Mary and Joseph as Andrew Bilgri played Christmas carols on the euphonium. (The Catholic Post/Tom Dermody)

Pandemic safety precautions made this year’s pick-up a drive-through event. As the guests approached the campus they were greeted by the sounds of Christmas carols played on the euphonium by Andrew Bilgri, an Illinois State University senior active at the St. John Paul II Catholic Newman Center. He was one of two Newman Center students recruited by Sister Michelle Fernandez, SCTJM, executive director of Catholic Charites for the Diocese of Peoria.

“I told Sister the best way I could serve is through what God gave me in the gift of music,” he told The Catholic Post. “What you have freely received, you should give freely.”

The guests then made a loop in which they were registered and then presented with a bag that included gift cards specially packaged for their household needs, according to online requests the families had made a few weeks earlier. The bags also included an ornament and a roll of gift wrap.

“We collected more than $36,000 in gift cards and checks,” she said. In addition to the gift cards, a distribution of donated toys and other items were distributed at St. Mary Parish in DePue.