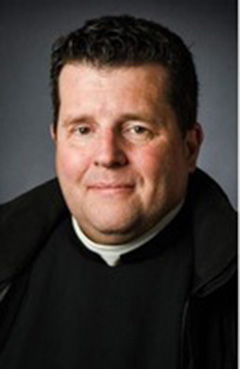 A Mass of Christian Burial will be offered at 10 a.m. on Wednesday, Dec. 23, at St. Mary’s Cathedral in Peoria for Msgr. Richard Soseman, the pastor of three parishes in Peru and vice postulator of the sainthood cause for Venerable Archbishop Fulton J. Sheen.

Msgr. Soseman, who was an author and radio host and served for a decade at the Congregation for the Clergy at the Vatican, died of COVID-19 related complications on Dec. 9, 2020, at OSF Saint Francis Medical Center in Peoria. He was 57.

Bishop Daniel R. Jenky, CSC, will be principal celebrant of the funeral Mass, which will be livestreamed on the diocesan website, cdop.org. The homilist will be Father Scott Archer, pastor of St. Andrew Parish in Fairbury. Burial will follow at 3 p.m. at St. Mary’s Cemetery in East Moline.

Visitation will take place at the cathedral one hour prior to the Mass. In addition, visitations are planned at three additional sites:

A native of Campbell’s Island, Msgr. Soseman was born Oct. 10, 1963, in Moline, the youngest of eight children of Charles L. and Agnes V. (Baele) Soseman. After graduating from Alleman High School in Rock Island, he went on to earn a bachelor’s degree in Spanish and political science and a master’s degree in Spanish language and literature from Marquette University.

He studied for the priesthood at Mount St. Mary’s Seminary in Emmitsburg, Maryland, and was ordained on May 23, 1992, at St. Mary’s Cathedral in Peoria.

He later added a license in Canon Law from Pontifical Lateran University in Vatican City.

His early assignments were as parochial vicar at St. Mary Parish in Moline and chaplain at St. Joseph’s Home in Peoria. He began work with the diocesan Marriage Tribunal in 1995 as adjutant judicial vicar and judge and later as judicial vicar.

In 1998, he was named pastor of St. Mary Parish in Princeville and temporary administrator of St. Joseph, Brimfield, and St. James, Williamsfield.

He would remain pastor in Princeville for the next decade. During that time, he was named Chaplain to His Holiness with the title of monsignor in 2000, served for a time as Diocesan Mission Director, and in 2004 began working on the Sheen cause for sainthood — serving as Bishop Jenky’s episcopal delegate and delegated judge who oversaw the assembling of materials for the cause. He later became vice postulator.

When he celebrated the 25th anniversary of his ordination in 2017, Msgr. Soseman told The Catholic Post that being present for the Mass at St. Mary’s Cathedral when the documentation for the Sheen cause was sealed and sent to Rome, and being at the Vatican when the crates were received and opened were among the memorable moments of his priesthood.

SPENT DECADE IN SERVICE AT VATICAN

In 2008, Msgr. Soseman was released for service to the Congregation for the Clergy in Vatican City, where he remain until being named pastor of St. Valentine and St. Mary parishes in Peru in 2017. Two years later, he would add duties as pastor of St. Joseph Parish, also in Peru.

Msgr. Soseman is the author of “Reflections from Rome: Practical Thoughts on Faith and Family,” published in 2013 by Roman Catholic Books. Earlier this year, he began recording a radio program for Sunday morning broadcast called “JMJ Moment” that aired on WLPO 103.9 FM in LaSalle and was later picked up by Catholic Spirit Radio in Bloomington. “JMJ Moment” recalls the initials for Jesus, Mary, and Joseph that Archbishop Sheen used to write on a chalkboard during his television series.

Like Archbishop Sheen, Msgr. Soseman used various media in his ministry, including recently social media, podcasts, and videos. He was fluent in five languages.

He was preceded in death by his parents and two brothers, Thomas and George.

Memorials may be made to the Archbishop Sheen Foundation or to the Soseman family for scholarships to be given at Our Lady of Grace Catholic Academy in East Moline and Alleman High School, Rock Island.