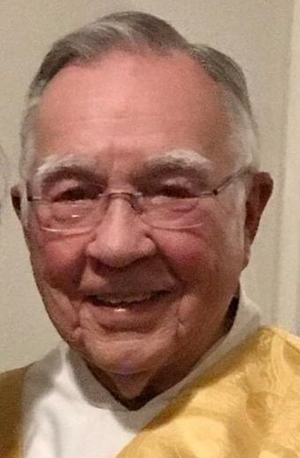 EAST PEORIA — A private family funeral Mass will be celebrated at 10:30 a.m. on Monday, Dec. 14, at St. Mark Church in Peoria for Deacon John Ethelbert Skender, a permanent deacon at St. Mark Parish who was active in the Cursillo community.

The funeral Mass will be livestreamed on the St. Mark School Facebook page. Msgr. Brian Brownsey, pastor, will be principal celebrant. Entombment will follow in Resurrection Mausoleum.

Deacon Skender’s children have said a Memorial Mass will be offered when it is safe for family, friends, fellow deacons, the Cursillo community, and members of St. Mark Parish to gather.

Born Sept. 9, 1936 in Peoria to John Raymond and Matilda “Tillie” (Frkovich) Skender, he attended St. John Grade School and Spalding Institute in Peoria. He served in the U.S. Army from 1957 to 1959 and worked as a technician for AT&T for 39 years.

He married Jacqueline (Jackie) Middleton Skender, on May 6, 1961 at St. John Church on Peoria’s South Side. They shared a love of one another, God, family, and baseball through their 56 years of marriage. Jackie died on Nov. 7, 2017.

He was a member of the sixth class of permanent deacons for the Diocese of Peoria and was ordained on May 17, 1997. Deacon Skender served St. Mark Parish and was the spiritual director of the Peoria Cursillo Center for many years before retiring in December 2018.

He was preceded in death by his parents and a brother, Stanley.

Memorials may be made to the Peoria Cursillo TEC Center, 401 NE Madison Ave., Peoria IL, 61603, PeoriaCursillo.org, or the Sisters of St. Francis of the Immaculate Conception at 2408 W Heading Ave, West Peoria, IL 61604.