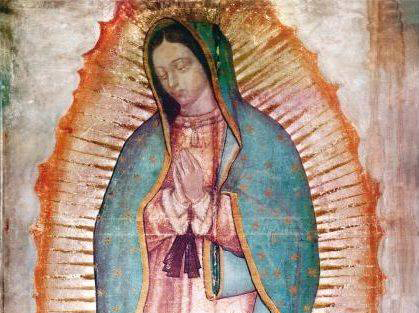 The feast of Our Lady of Guadalupe is Saturday, Dec. 12.

The Dec. 12 feast of Our Lady of Guadalupe is a major gathering day for Hispanic Catholics, but across the Diocese of Peoria plans are being modified to reflect the health concerns of 2020.

“We will still celebrate Our Lady of Guadalupe but with the (pandemic) restrictions,” said Rosie Romero, diocesan director of Hispanic Ministry.

As of Dec. 1, novenas, Masses, and certain cultural aspects of the celebration of the Blessed Virgin Mary’s appearance to St. Juan Diego in Mexico were still being planned at St. Mary’s Cathedral in Peoria and other parishes with Spanish-speaking populations. However, social aspects such as parties and food sharing have been cancelled. Organizers are keeping health and safety concerns in the forefront and understand plans might change as the regions’ coronavirus numbers continue to spike into December.

In the Archdiocese of Chicago, for example, annual festivities and pilgrimages to the Shrine of Our Lady of Guadalupe in Des Plaines on Dec. 11 and 12 have been canceled due to the ongoing pandemic.

“We are blessed to have a church with a very large seating capacity, even given the restrictions, but we are also adjusting our plans in an attempt to spread people out,” said Father Tom Otto, parochial vicar of the LaSalle Catholic parishes, speaking of St. Hyacinth Church, which will host that region’s Guadalupe celebrations.

A Guadalupe Team at the parish has been tasked with finding creative and safe ways to celebrate the feast in 2020, emphasizing spiritual and prayerful preparation. The traditional nine-day novena of Masses at 7 p.m. leading up to Dec. 12 has been retained, but this year the Masses will also be livestreamed “so that people can participate in whatever way is best for their particular situation or health,” said Father Otto.

To better accommodate what are traditionally large crowds on the feast day itself, the “Mañanitas” (morning songs and prayers to Our Lady) will be offered twice during the night — once at midnight and again at the usual 5 a.m. Two Masses will be offered on Dec. 12, at noon and at 7 p.m.

The celebration at St. Mary’s Cathedral in Peoria has also been modified. Often a diocese-wide event, this year’s observance will be for area Catholics. Instead of the traditional Mexican party after Mass, packaged food-to-go will be made available.

“A good thing is that in the cathedral it is a whole-day celebration so people can go at different hours of the day,” said Romero. More people will be encouraged to attend the 5:30 a.m. Mass so that the evening Mass — a 6 p.m. liturgy concelebrated by Bishop Daniel R. Jenky, CSC, and Coadjutor Bishop Louis Tylka — might not be overcrowded.

As in LaSalle, in Peoria the feast will be preceded by a nine-day novena to the Virgin of Guadalupe, with novena prayers at the cathedral at 6:30 p.m. followed by a 7 p.m. Mass. Each evening will focus on a different aspect of Mary’s example of holiness, such as her patience, joy, humility, and evangelization.

The cathedral’s celebration on Dec. 12 begins with “Mañanitas” at 4:30 a.m. and continues with dances and reenactments throughout the day. The full schedule is found on the “Ministero Hispano Diocese of Peoria” Facebook page.

“We’re convinced that God is going to bring lots of good out of this terrible pandemic, awakening the faith in hearts where it has grown cold and motivating many people to seek out the Lord and trust Him,” said Father Otto.

“Let’s hope the situation does not get worse. We’ll be alert,” assured Father Julio Faes, parochial vicar of the cathedral parish and associate director of Hispanic Ministry.

Meanwhile, with the Basilica of Our Lady of Guadalupe in Mexico closed for her feast to prevent the spread of COVID-19, Pope Francis said Catholics still can receive a plenary indulgence Dec. 11 and 12 for their Marian devotion if they follow certain conditions.

Mexico City Cardinal Carlos Aguiar Retes’ letter announcing the indulgence was accompanied by the formal proclamation by Cardinal Mauro Piacenza, head of the Apostolic Penitentiary, the Vatican tribunal that deals with matters of conscience and with indulgences.

To receive an indulgence, a remission of the temporal punishment one deserves for one’s sins, the following conditions must be met. A person must:

The indulgence would be for anyone in the world, but Cardinal Aguiar acknowledged that people in the United States and the Philippines have special devotions to Our Lady of Guadalupe, whose feast is Dec. 12.