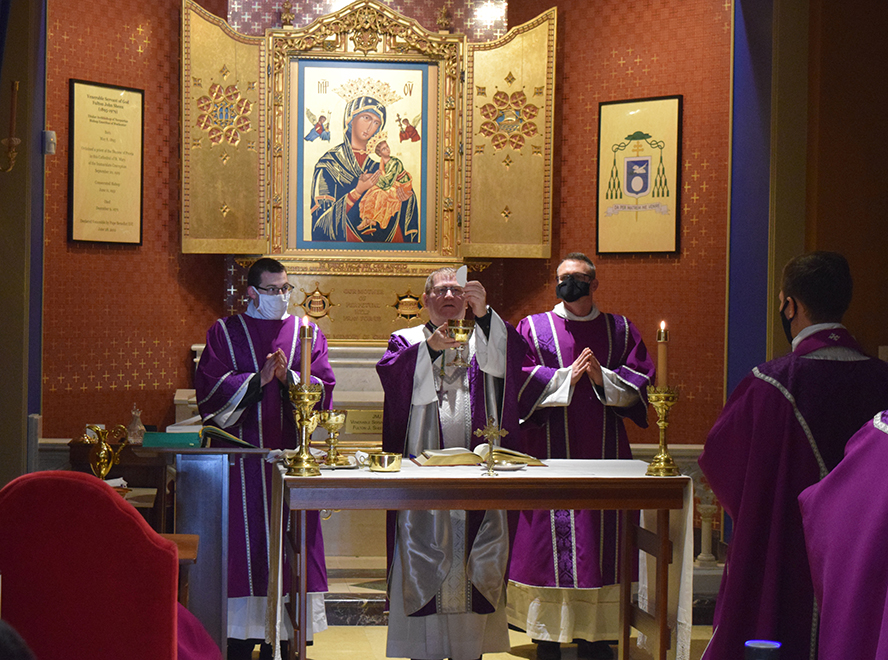 A Mass at the tomb of Archbishop Fulton J. Sheen on the 41st anniversary of his death on Dec. 9 also was a first opportunity for the Diocese of Peoria to mourn the death from COVID-19 two hours earlier of the vice postulator of the famed media pioneer and author’s cause for canonization.

“We gather with sad news for our diocese as Msgr. Richard Soseman has gone home to God this morning,” said Coadjutor Bishop Louis Tylka of Peoria at the start of the 8:30 a.m. Mass at St. Mary’s Cathedral in Peoria. The livestreamed Mass followed a nine-day video novena for the canonization cause of Archbishop Sheen that drew participants from around the world. 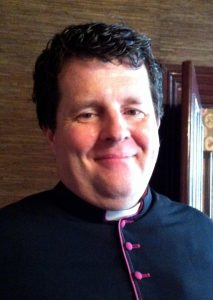 Msgr. Soseman, 57, had been the episcopal delegate assigned by Bishop Daniel R. Jenky, CSC, to assemble Archbishop Sheen’s sainthood cause and later became vice postulator. Acknowledging “our hearts are heavy” with the news of his death, Bishop Tylka said “in some ways it is providential and fitting that on the same day that Sheen went home to God, so does Msgr. Soseman.”

Prayers for Msgr. Soseman, the pastor of three parishes in Peru, had spread on social media after he announced his positive test results for COVID-19 on Nov. 22 and as updates were given during his subsequent hospitalization.

At the close of Mass, Bishop Tylka noted a conversation he had with Msgr. Soseman on the Monday before Thanksgiving. Msgr. Soseman had just taken ill and could not attend a meeting that day to plan the Sheen anniversary Mass and discuss new efforts to move the cause forward.

“He was so excited to hear we were going to celebrate this Mass,” said Bishop Tylka. “He planned on being here.” And while he was not present “in the way we expected or wanted him to be here,” he added, Msgr. Soseman “of course is here, in that we joined all the saints — all who have gone before us marked by the sign of faith — around the altar of the Lord.”

The Mass was celebrated in the cathedral’s Lady Chapel, where Archbishop Sheen’s remains were entombed in the summer of 2019, just steps from where he was ordained as a priest from the Diocese of Peoria a century earlier. It was attended by about 30 people, including the seminarians of the Diocese of Peoria. Bishop Jenky was in choro.

For the first four decades since his death on Dec. 9, 1979, at the age of 84, Archbishop Sheen’s body had been in a crypt in the basement of St. Patrick’s Cathedral in New York City.

Soon after the transfer, Pope Francis formally approved a miracle attributed to Archbishop Sheen’s intercession, paving the way for his beatification. The date of the beatification has yet to be set. 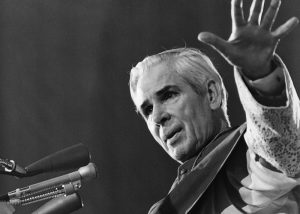 Bishop Tylka recalled Archbishop Sheen — whose radio and television shows reached millions in the mid-20th century and who authored nearly 70 books — as “a master teacher” of how to live for Jesus and bring others to the Lord. Because so much of his teaching is preserved in the various media, there remains much to learn from Archbishop Sheen, he added.

Bishop Tylka closed his homily with a quote from Archbishop Sheen recalled at his 1979 funeral Mass and recorded in his autobiography, “Treasure in Clay.”

“It is not that I do not love life, I do,” Archbishop Sheen once said. “It is just that I want to see the Lord. I have spent hours before him in the Blessed Sacrament. I have spoken to him in prayer, and about him to everyone who would listen. And now I want to see him face to face.”

During the Mass, prayers were offered that Archbishop Sheen’s legacy of proclaiming God’s love to all “may continue to bear fruit in all those who encounter God through his writings and the witness of his life.” At the conclusion of the Mass, Bishop Tylka led those present in the prayer for Archbishop Sheen’s canonization.

There were also prayers for the repose of Msgr. Soseman’s soul and for all those suffering from the coronavirus “to find comfort in the heart of Jesus, the Divine Healer.”

EDITOR’S NOTE: An obituary for Msgr. Soseman will be published as information is made available.