The same yesterday, today and forever 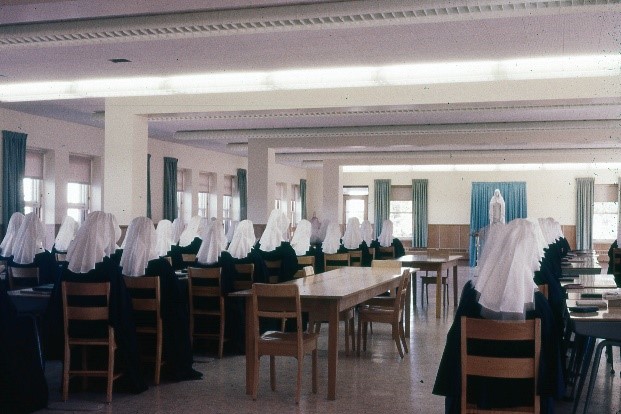 By Paul Moore / In My Father’s House

Recently, I was thanking my aunt for an old family letter she had sent me, written by my grandfather. “It was another time,” she said.

The letter described the 1958 Eastertide when my aunt was professed as a nun, and her sister (another aunt) had just entered the novitiate. My grandfather’s letter provides a window into the cultural centrality of celebrations like these in the Catholicism of the era. They were like big weddings with multiple brides, as my aunt was professed together with a whole class of other young women. The atmosphere was, as my grandpa wrote, “bubbling over with ‘honest to God’ happiness.”

One can sense the excitement and pride of a faith community — particularly in our family’s case an Irish Catholic community — that had come into its own after the persecutions of the not-too-distant past (i.e. “No Irish Need Apply”).

Catholicism had reached a plateau of cultural acceptance. Hollywood had helped to pave the way in the ’30s and ’40s with stars such as Spencer Tracy winning an Oscar for portraying Father Flanagan in “Boys Town,” followed by Bing Crosby picking up an Oscar of his own for playing Father O’Malley in “Going My Way” (and then reprising the role in “The Bells of St. Mary’s” with Ingrid Bergman).

This was also the era when Archbishop Fulton Sheen charismatically promoted the faith in his primetime TV show “Life is Worth Living” to as many as 30 million viewers weekly.

Yet, the winds of change were astir.

NOT ALL WAS AS IT SHOULD BE

In the fall of the year my aunt was professed, Pope Pius XII died, and Pope John XXIII was elected. Soon after, he announced Vatican II would be convened to “open the windows (of the church) and let in some fresh air.”

You might say the breeze really blew the furniture around. I’m writing these notes from a chair that once sat in a motherhouse built to house hundreds of Sisters — and did — for a number of years. Now it’s gone, a victim of falling vocations even as the building rose, and many previously called no longer feeling chosen as the ’60s and ’70s resounded outside.

Meanwhile, the movies had changed their tune. Audrey Hepburn left the convent in “A Nun’s Story.” Mary Tyler Moore prayed for discernment in the last scene of “Change of Habit” because of her feelings for a doctor, played by Elvis Presley (who ironically had helped to usher in the cultural metamorphosis that made society feel “all shook up”). Even Maria von Trapp left the convent in the “Sound of Music.” (P.S. My aunts stayed.)

Of course, we know now that when Catholicism was king, not all was as it should be. We weren’t as welcoming as we could be outside a sometimes exclusive “Catholic club” atmosphere. As well, clergy sexual abuse was a hidden mold camouflaged by a combination of innocence and hubris, “It can’t be true — not in our church!”

Obviously, surfaces can be deceiving. Once we thought everything was fine, but it really wasn’t. Today, there is pain, tears and perhaps the temptation to despair with each new headline, but as Bishop Robert Barron, chair of the U.S. bishop’s Committee on Evangelization and Catechesis has pointed out, as a result of reforms and protocols enacted through the Charter for the Protection of Children and Young People in 2002, the incidence of abuse has “plummeted.”

We can’t and shouldn’t want to go backward. God has decreed that earthly time will move constantly forward, and who are we to disagree? As for the sins of the past, the Lord teaches that with true sorrow and a re-invigorated spirit of humility, redemption is always within our reach.

My aunt and I concluded our reminiscence by agreeing that underneath cultural coverings, the rock of ages to which we cling is the same yesterday, today and forever.

Paul Thomas Moore is a Catholic commentator and singer-songwriter. He and wife Mary Louise attend St. Mary of Lourdes in Germantown Hills. He can be reached at paulthomasmoore@hotmail.com .