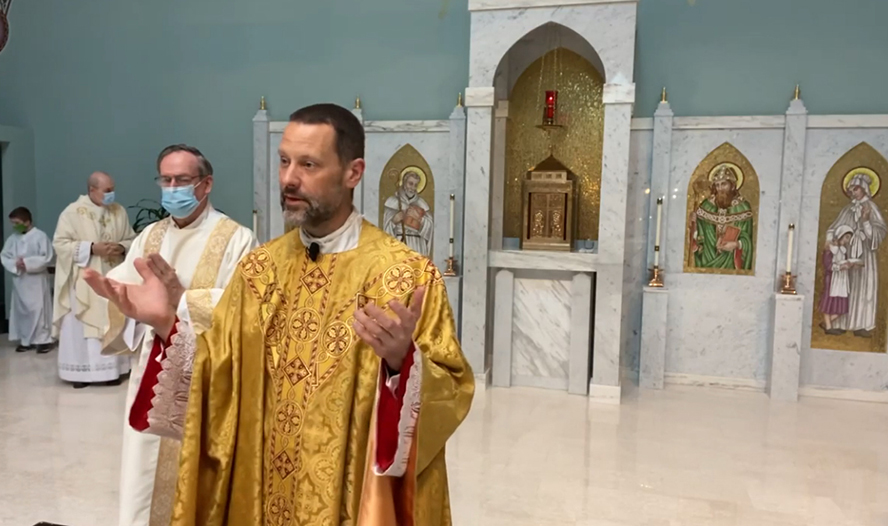 In this screenshot from the YouTube video broadcast of the dedication Mass on Nov. 22, Msgr. Jason Gray prepares to bless elements of the renovated sanctuary at St. Thomas the Apostle Church in Peoria Heights.

PEORIA HEIGHTS — With an eye toward incorporating elements found in the original church built in 1940 into the church that was built onto it in 2002, the sanctuary of St. Thomas the Apostle Church has been renovated in a way that invites people to raise their hearts and minds to God.

Msgr. Jason Gray, pastor, blessed the new marble baldachino that houses the tabernacle, mosaics of the saints, and artwork depicting the theological and cardinal virtues at Mass on the Solemnity of Christ the King. Also blessed were the new processional cross and sanctuary furniture, as well as the refurbished baptismal font from the original church. 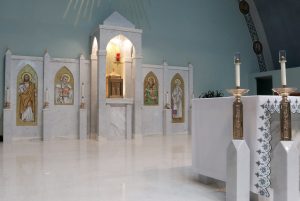 The new marble baldachino and flooring as well as polished brass candle holders are seen in this view of the newly blessed sanctuary. (The Catholic Post/Jennifer Willems)

Other improvements included removing the carpeting in the sanctuary and installing marble flooring and replacing the wood tops on the candle holders with polished brass that matches the existing stand for the paschal candle. Mosaics for Mary and Joseph now grace either side of the sanctuary.

The project, which did not require altering the “footprint” of the sanctuary, cost $300,000 and was fully funded before work began in March, according to Msgr. Gray. He said this was made possible with a lead gift of $150,000 that was matched by contributions from parishioners and friends of St. Thomas over the course of 2019.

The design and execution of the renovation was done by Daprato Rigali Studios of Chicago. The mosaics of the saints were made of Venetian glass by artists at the Demetz Art Studio of Italy.

“One of the things we say about prayer is that prayer is the raising of the heart and mind to God,” Msgr. Gray told The Catholic Post. “Our churches are meant to lift our mind up to God. The elements we have in the church should, in fact, draw us into a deeper sense of prayer.”

With that in mind, each of the elements was chosen carefully, he said, and in a way that would be meaningful to St. Thomas parishioners.

Mosaics of Mary (pictured) and Joseph now grace either side of the sanctuary. (The Catholic Post/Jennifer Willems)

Mosaics on the left of the baldachino, for example, are of St. Thomas the Apostle, the patron of the parish, and St. Bernard of Clairvaux, in honor of founding pastor Msgr. Bernard Rank. Msgr. Gray said this mosaic also calls to mind that St. Thomas Parish was a mission of St. Bernard Parish in Peoria in the beginning.

On the right side are mosaics of St. Patrick to honor Msgr. William Watson, the second pastor, who has a devotion to Ireland, and St. Elizabeth Ann Seton, patroness of Catholic schools.

The mosaics provide a continuity between old and new. A large mosaic mural of St. Thomas has been a feature in the narthex, marking where the former church ends and gathering space for the new church begins.

The medallions depicting the 12 virtues were chosen by Msgr. Gray, third pastor, who worked in the Congregation of the Causes of Saints in Rome from 2012 to 2015. He explained that these virtues or characteristics are examined for each person who is proposed for sainthood.

They include faith, hope, charity, prudence, justice, temperance, and fortitude, as well as poverty, chastity, obedience, and humility. There is also a symbol for martyrdom.

“So it becomes a tool for preaching and teaching,” he said. “I’ve already been able to make use of it, which really is a wonderful thing.”

When in-person instruction was still being offered, the students at St. Thomas the Apostle School did some art projects where they were looking for Christian symbols and created their own medallions, Msgr. Gray added.

Longtime parishioners said that when the new church was added in 2002, Msgr. Watson left some design elements for a later time, “after living in the church for awhile.”

Now the richness of the décor in the original church carries over into the new worship space, Msgr. Gray said, while retaining what is most important.

To watch a video of the blessing and dedication, click here.