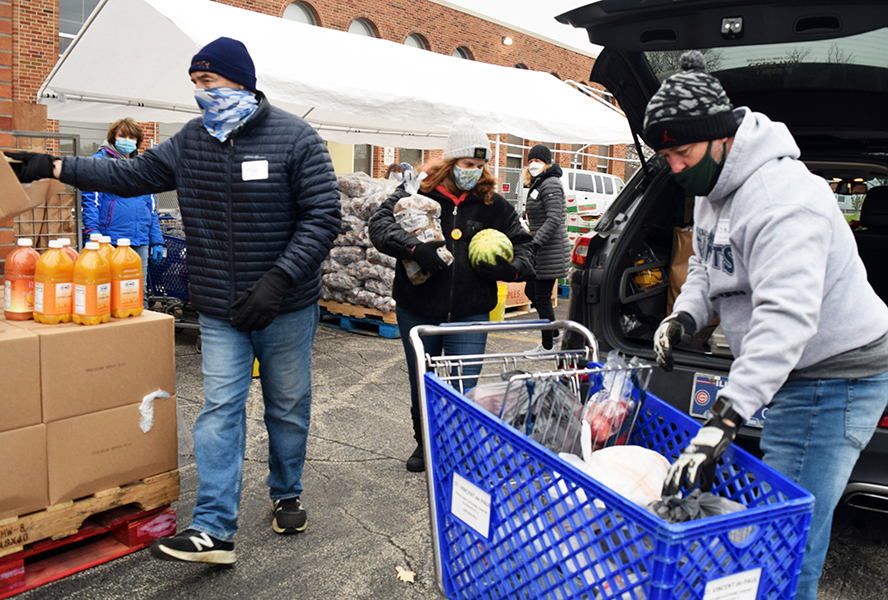 Volunteers at the food and clothing pantry operated by the Society of St. Vincent de Paul's Holy Trinity Conference in Bloomington load supplies into a client's car on Nov. 14. Volunteer Ron Yoder is pictured emptying the cart, Teresa Dubravec brings a watermelon and potatos, and Tom Fenger assists at left. (The Catholic Post/Tom Dermody)

When is giving away a large turkey for Thanksgiving not the kindest thing to do for a family in need?

“A lot of people who come to us aren’t able to cook a Thanksgiving dinner,” said Nancy Elson, who assists with the food pantry at St. Mary Church in Canton. Perhaps they don’t have a pan large enough, she explained. Maybe they don’t have an oven.

“Some of these people are living in a basement with nothing but a hot plate or microwave,” Elson told The Catholic Post. “We have to be careful what we give so they can use it.” 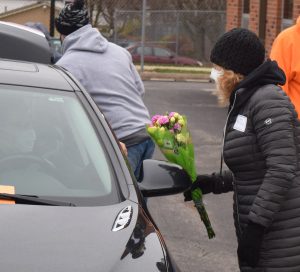 The distribution at the Bloomington pantry on Nov. 14 included not only food but a gift of flowers for each client. “Nobody’s taking this job from me,” said volunteer Brenda Seger. “This is the best job in the world.” (The Catholic Post/Tom Dermody)

Across the Diocese of Peoria, food pantries, clothing pantries, and baby pantries — whether operated by the Society of St. Vincent de Paul, an individual parish, or Catholic Charities — are meeting the basic needs of individuals and families year-round. The army of volunteers mobilizes not just at Thanksgiving or Christmas, but as needed.

“Our mission is usually week to week,” said Jim Tuite, president of the Society of St. Vincent de Paul’s Holy Trinity Conference in Bloomington. The conference operates the largest Catholic-sponsored food pantry in the Diocese of Peoria, along with a clothing pantry, from the newly remodeled former Corpus Christi (Holy Trinity) Junior High School building at 705 N. Roosevelt Avenue, near Holy Trinity Church.

Last Saturday, to meet the growing demand, the Bloomington pantry — normally open on Mondays and regularly serving between 300 and 400 households — began offering Saturday hours as well, from 9 a.m. to 11 a.m. twice a month via a well-organized drive-through set up on the parking lot.

The charity continues across the Diocese of Peoria despite, and to a greater extent because of, the COVID-19 pandemic.

“We’ve had to rearrange our delivery system to protect both clients and workers,” said Elson. “We value our workers and our clients equally.”

For most pantries, even ones blessed recently with spacious new buildings, those safety measures have meant outside curbside delivery for the last several months. As winter chill sets in, that practice will continue.

“It’s a different procedure, but for the most part it’s gone very smoothly,” said Evelyn Ribordy, director of the St. Vincent de Paul food and clothing pantry of St. Mary Parish in Pontiac. Last year, the pantry moved from its location near the church and school to a donated former medical office building at 401 E. Water St. Volunteers now prepack groceries and hand them to clients outside according to their need.

While the food and clothing nourishes and warms bodies, Ribordy would like to add something extra for the clients. 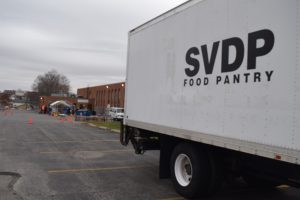 A truck lets passersby know they have arrived at the food and clothing pantry operated by the Society of St. Vincent de Paul’s Holy Trinity Conference in Bloomington. (The Catholic Post/Tom Dermody)

The more limited communication is noted in Canton as well.

“We used to know who is in the hospital, and we’d send them cards and when they’d come back we’d say how glad we are,” said Elson. “First of all, with the masks on, we don’t really know who they are sometimes. Everyone says ‘God bless you,’ ‘Have a good day,’ and ‘Thanks for coming,’ but there isn’t anywhere near the personal attention and support” as in pre-COVID times.

The Logan County Catholic Community Food Pantry in Lincoln is another outreach that recently moved to a new, larger facility, but now must distribute outdoors. But Carolyn Webster looked on the bright side.

“We’ve had lines clear out to the street,” she said as the number of families served has grown from 986 last year to 1,572 in 2020. On one Wednesday last month, the pantry gave out 258 bags of groceries in four hours. While the task can seem overwhelming, “the volunteers have handled it beautifully” and the long lines have meant “we’ve had plenty of time to talk” to clients, said Webster.

GRATITUDE AND AN INVITATION

All pantry personnel contacted by The Catholic Post expressed gratitude for the support that has continued throughout this difficult year and for the unselfish dedication of volunteers. They also all welcomed further financial help.

A list of pantries sponsored by the Society of St. Vincent de Paul can be found at svdpsocietypeoria.org.

The rewards of volunteering are many.

Nancy Elson recalled the time a young man with three children whose job had been cut visited the pantry. The food he was given, he said, helped him retain enough money for gas so he could find a new job.

He returned and told Elson “I got a job. You saved us.”

“It was a high spot for me,” said Elson. “I’m 88 years old. Until I started at the pantry I had no idea how desperate people are. It’s been the best education of my life.”