St. Martin of Tours and an interior ‘lantern walk’ as we approach Advent 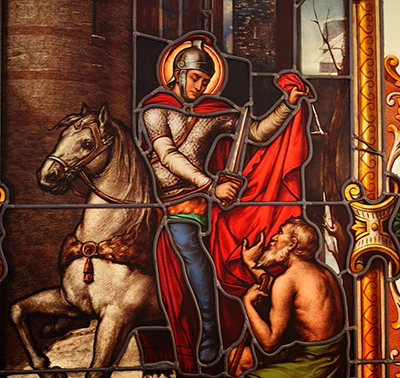 While in the Roman army, St. Martin of Tours was moved when he saw a beggar out in a snowstorm. He used is military sword to cut his own cloak in half, giving half to the beggar.

Catholic life is marked by times of fasting and feasting. It is one of the wonderful ways we live out the order of God’s creation of time, as well as observe the moments of suffering and rejoicing in the history of salvation.

On Nov. 11, the church celebrates the feast of St. Martin of Tours, known as Martinmas. It appropriately falls just before the start of Advent, as the feast is a sort of precursor to that “preparing the way of the Lord.”

A SOLDIER AND A SERVANT

St. Martin of Tours was born in the 300s. Though he was born into a pagan family, Martin became interested in the Catholic faith at a young age. Following in his father’s footsteps, Martin enlisted in the Roman army under the Emperor Julian.

One evening, while walking the streets, Martin’s heart was moved when he saw a beggar out in a snowstorm. Martin used his military sword to cut his own cloak in half, giving half to the beggar. That night Martin had a dream in which he saw Jesus on the street wrapped in the half of the cloak that Martin gave to the beggar earlier in the night. In the dream, Jesus said to the angels, “This is Martin, the Roman soldier who is not baptized.”

When Martin awoke, he was convinced he wanted to be baptized. He decided to leave the army, no longer believing he could wage war and violence on another human. Martin was imprisoned, as opting out of the military violated the law that every man must enlist during times of war. However, he negotiated with Emperor Julian by offering to stand at the frontlines without weapons or shields. Julian agreed, knowing this was certain death for Martin. But, before this could happen, the war miraculously ended.

No longer tied to the army, Martin went on to become a Benedictine monk and bishop. He is most known for his generosity, all starting with the beggar he encountered on the street before becoming Catholic.

Traditionally in Europe, the church celebrated St. Martin’s feast as one of the last harvest festivals before winter. Villages would gather the last of the crops and usher autumn out by eating, drinking, and making merry, followed by the main festivity of a lantern walk. Children would make paper lanterns and walk through the streets holding their lanterns for light, symbolizing carrying the light of Christ into the long, dark days and nights of winter.

Observing these feast day celebrations is a special way to put our faith into motion, making our everyday movements reflect the traditions of the church. Martinmas is typically celebrated on the feast of St. Martin, but it can be celebrated any day of November.

In these days before Advent, may we walk towards that season of joyful anticipation with the light of the saints and the traditions of the church.

Walking through our neighborhood with lanterns may not be the most realistic option, but we can surely adapt this symbolic tradition into our own interior faith life. To mark this feast, we can take an evening to celebrate an interior lantern walk within our hearts, to carry a figurative lantern around the unillumined pieces to see where we need to work to prepare the way of the Lord.

St. Martin was particularly passionate about living out the Beatitudes and doing acts of charity for “the least of these.” Setting aside a few hours one day in November to walk through each of the Beatitudes individually, examining within ourselves how we are both living out the virtue of charity and where we fall short, can help us to light up those places in our hearts where we can draw closer to Jesus.

Alternatively, this can also be a way to look at how we can be a source of warmth to the people in need in our lives. This may be choosing to be present to someone in our family who we know needs a listening ear. It may be going out of our way to make a special meal for someone we love. It may be saying a rosary for someone we know might be in need of prayers. Making this interior lantern walk can help us to light the path with which we will prepare the way of the Lord come Advent.

In these days before Advent, may we walk towards that season of joyful anticipation with the light of the saints and the traditions of the church.

Katie Faley has a master’s degree in theology and theological studies from the University of Notre Dame. A member of St. Mark Parish in Peoria, she is a former Echo Catechetical Leader at St. Elizabeth Seton Parish in Naperville.