Thanksgiving dinner to be ‘takeout’ at Sophia’s Kitchen: how you can help 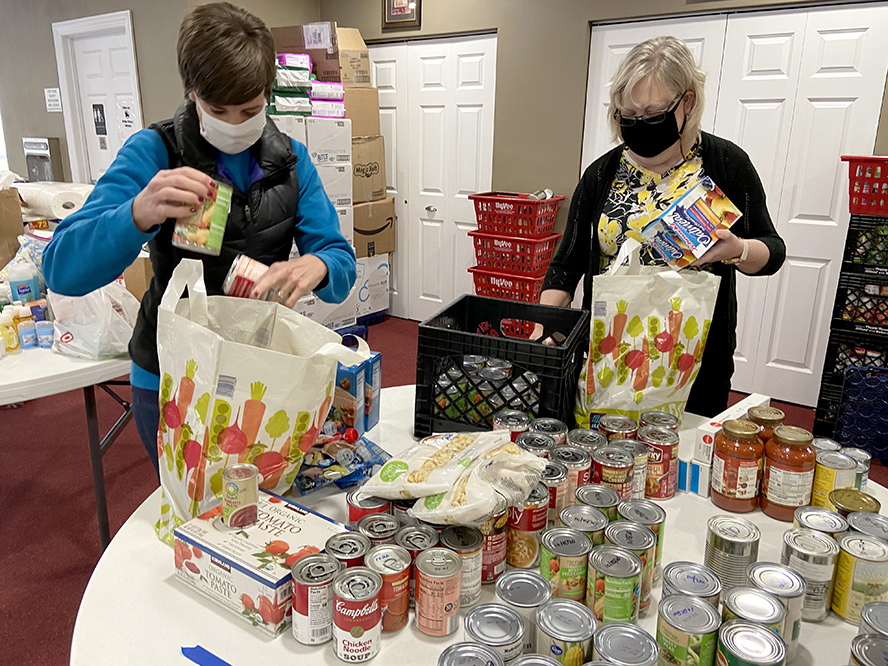 Courtney Curtis, assistant director of Sophia's Kitchen in Peoria, and Claire Crone, director, fill bags that will be given out at the food pantry, which is held on the last Friday of the month. In a few days, the tables will be filled with items that will go into the kitchen's first-ever Thanksgiving takeout dinner and then restocked for Christmas bags. (The Catholic Post/Jennifer Willems)

Hunger doesn’t take a holiday and neither will Sophia’s Kitchen this Thanksgiving and Christmas, despite COVID-19 restrictions. Director Claire Crone said how they provide for their clients in downtown Peoria will look different, however.

Instead of inviting people into the parish hall at St. Joseph Church, 103 S. Richard Pryor Place, for a sit-down Thanksgiving dinner, volunteers will prepare and bag about 500 meals for the men, women and children to take with them. Crone said the students from St. Mary School in Pontiac won’t be able to come and serve the meals as they have done in the past, so they will make decorations to go into each bag.

“It will be our usual meal, just completely takeout,” Crone said, noting that they have worked out how to package the turkey, mashed potatoes and gravy, green beans, “the most delicious cranberry salad you’ve ever had,” roll and butter, and pie.

As always, the meals will be distributed on the Thursday before Thanksgiving, which is Nov. 19.

The Peoria Area Food Bank has donated 20 17-pound turkeys that will be cooked, sliced and frozen until needed on the big day. The St. Vincent de Paul Society of Blessed Sacrament Parish in Morton has purchased the majority of the other food, but Crone said there are still a few items on her shopping list. That includes fresh things, such as celery, apples, butter and milk.

“We are seeking donations of pies,” she told The Catholic Post, adding that homemade pies cannot be accepted again this year. “It has to be commercially prepared in a registered kitchen. Pumpkin pies are obviously the most popular.”

Pies that are already prepared are the easiest for the Sophia’s Kitchen volunteers, but Crone said, “We’ll take anything.”

Christmas will bring another change.

“We’re going to have to cancel our usual bag packing — that’s just too many people to put into the building at one time,” Crone said. It will be done throughout December by small groups of volunteers.

The biggest issue in filling the 1,000 bags, which have been provided by Illinois American Water, is that she can’t place bulk orders for the food this year. The stores have told her that their supplies are so low that if they take an order from her they won’t have enough product to put on their shelves, she explained.

“I’m really asking for canned goods this year,” Crone said. “Food drives are going to be major for us, just trying to get as much groceries in here.”

Someone donates the hams, but turkeys and hams are also welcome, she said. And the people she serves are also happy to receive toilet paper.

“That’s a big one — that was big here before it was big out there,” Crone told The Post.

“I think this year, people got a little tiny glimpse into how our clients live. They’re constantly trying to make do,” she said. “Our clients face this every single day. . . . Where our restrictions have eased up a bit, they’re still facing them.”

Instead of having the clients sign up to receive the food bags, Sophia’s Kitchen will hand them out on a first-come, first-served basis on the Monday, Tuesday and Wednesday before Christmas.

After that, Sophia’s Kitchen will close for two weeks for maintenance and an “enforced quarantine,” according to Crone.

“If someone catches anything over Christmas, they can get well before they return,” she said. “Hopefully that keeps us all healthier here.”

While the kitchen is closed, the Little Free Pantry in front will be stocked every day.

“Historically, our lowest numbers of the entire year are the two weeks after Christmas. They’ve just been given so much food from us and other agencies in town. Families are more willing to take them in at this time of year, too,” Crone said. “So usually our numbers will drop down to 50 or 100.”

Those who wish to make donations of food for Thanksgiving or Christmas may do so between 8:30 a.m. and 3 p.m., Monday through Friday.