A World War II story of faith, courage and life experiences ‘Beyond All Odds’ 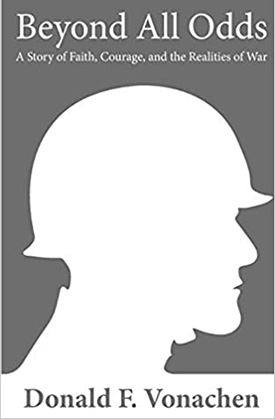 Books on war — its strategies, personalities, horrors, etc. — are plentiful. But as Veterans Day 2020 approaches, there are a host of reasons to spotlight “Beyond All Odds,” a personal reflection on World War II’s Battle of the Bulge penned by the late Donald F. “Bud” Vonachen.

It would be enough that the story is compelling — a thin memoir taking readers into the forests and farmlands near St. Vith, Belgium, during the bitterly cold and violently fierce winter of 1944. Looking for another reason to appreciate our veterans? Read how Vonachen, only 19, and his regiment of the U.S. Army’s 106th Infantry Division took on the advancing Germans in the largest and bloodiest single battle fought by the United States in World War II. 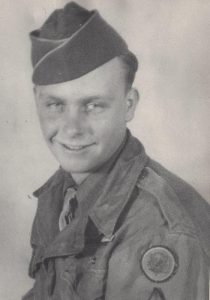 Donald F. “Bud” Vonachen in a photo from his U.S. Army days.

But within and beyond the book’s 75 pages are more than an historic recountings of sacrifice, suffering, and heroism. “Hero,” by the way, is a word that Vonachen — an attorney and member of St. Philomena Parish in Peoria who died in 2005 — reserves for those who gave their lives for their country. Among the 225 in his Company, only nine were left at the battle’s end. In all, the six-week engagement cost 19,000 U.S. lives.

“The world we all take for granted has been given to us on a platter by these heroes and the untold thousands like them,” writes Vonachen.

A STORY OF FAITH, TIMELESS LESSONS

“Beyond All Odds” — written by Vonachen 50 years later and produced in book form by his grandson in 2015 — is just as much a story of faith, filled with lessons for modern life.

“Each of us during our lifetime is subjected to adversities which make life tough and at times even unfair,” writes Vonachen in words that leap from the page in this time of pandemic. “With each adversity there is a tremendous lesson available to see and learn from.”

In an epilogue designed especially for his grandchildren, Vonachen shares some of the key lessons he learned during the war, including the need to turn our lives over to God’s will. It is something he did on the battlefield when death seemed inevitable. And it led to a life-changing — and perhaps life-saving — spiritual experience.

“No amount of attachments, no person or persons can affect your enjoyment and happiness if you have learned to discard them for a priority which we call the will of God — ‘His will be done!’” Vonachen writes.

He also encourages readers to be givers, not takers, putting the needs of others first.

While penned 26 years ago, epilogues worthy of the book’s title continue to be written. 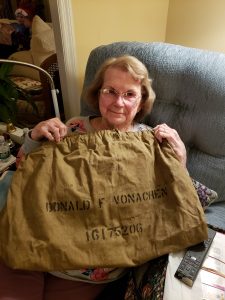 For example, one year ago the family received word that an Army duffel bag with Vonachen’s name and service number had been found in an old barn near the intersection of Luxembourg, Belgium and Germany. The finder tracked down the Vonachen family, including by locating the “Beyond All Odds” book on Amazon. The duffel bag was returned to Vonachen’s wife, Pat, just days before the 75th anniversary of the Battle of the Bulge. The story was recounted this March in an edition of Peoria Magazine.

“Best Christmas present ever!” said Donna Vonachen Abdnour, one of their seven children, in a Facebook exchange with the finder in late 2019.

Pat Vonachen, 93 — herself a volunteer hero who gave nearly 3,000 hours to the OSF Saint Francis Medical Center Auxiliary — died on Oct. 28 as this review was being written. She now rests with her husband at Resurrection Mausoleum in Peoria.

EDITOR’S NOTE: “Beyond All Odds” may be purchased on Amazon or at the Moon Dancer Boutique, 933 N. Sheridan Road in Peoria.