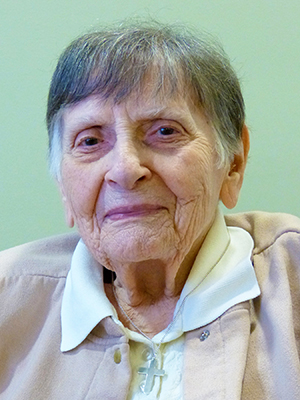 SINSINAWA, Wis. — A funeral Mass was offered on Oct. 29 at the Dominican motherhouse here for Sister Estelle Wiltz, OP, a longtime educator who served as principal at St. Mark School in Peoria and Visitation Catholic School in Kewanee. Burial followed in the Motherhouse Cemetery.

The daughter of Arnold and Anna Marie (Wedmire) Wiltz, Sister Estelle was born on June 1, 1927, in Peoria. She made her first religious profession as a Dominican Sister of Sinsinawa on Aug. 5, 1947, and her perpetual profession on Aug. 5, 1950.

She ministered primarily as a teacher or principal in Illinois, Montana, South Dakota, Nebraska and Wisconsin. In the Diocese of Peoria, Sister Estelle was principal at St. Mark in Peoria from 1977 to 1984, and at Visitation in Kewanee from 1985 to 1989.

She was preceded in death by her parents; an infant sibling; five sisters, Columba Shedlock, Angela Mattingly, Florence Klockenga, Mary Barron and Anne Mais; and three brothers, William Wiltz, George Wiltz, and Robert Wiltz. Sister Estelle is survived by nieces, nephews and her Dominican Sisters, with whom she shared 73 years of religious life.

Memorials may be mailed to the Sinsinawa Dominicans, 585 County Road Z, Sinsinawa, WI 53824-9701, or made online at sinsinawa.org/donate.