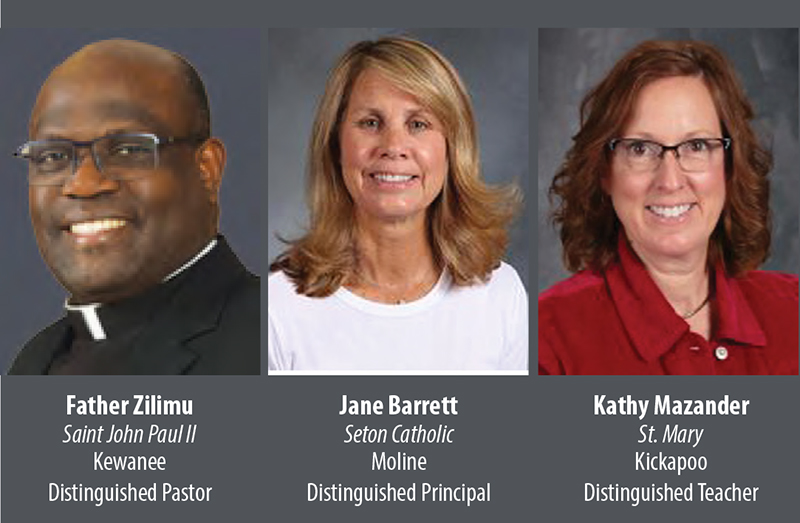 The honorees will be recognized at a Mass and luncheon on May 5, 2021.

During a school year that has required extraordinary amounts of patience, adaptability and faith, the Office of Catholic Schools for the Diocese of Peoria offered three reasons to celebrate by recognizing its outstanding pastor, principal and teacher.

Joining them will be those who were named last year, but could not be recognized publicly due to the pandemic. They are Msgr. Mark Merdian, pastor of St. Pius X Parish and canonical pastor of Jordan Catholic School in Rock Island; Dr. Noreen Dillon, principal of St. Mark School in Peoria; and James Taber of Central Catholic High School in Bloomington, Distinguished Teacher of the Year.

“We are most grateful for the many years that you have given guidance and support to not only our office but also to the school communities and educational apostolates in which you have served,” Dr. Sharon Weiss, superintendent of diocesan schools, wrote in her letter to Father John.

The priest, who celebrated his 25th anniversary of ordination on Aug. 13, grew up in Tanzania and has served the Diocese of Peoria since 2000. In addition to campus ministry at St. John’s Catholic Newman Center in Champaign, Father John has been involved in parish ministry at Epiphany Parish in Normal, St. Matthew in Champaign and St. Boniface in Seymour, and St. Mary in Kewanee. He has been pastor at Saint John Paul II since 2014.

In her letter to Barrett, Weiss noted the longtime principal’s skill, passion, love and dedication to everyone at Seton Catholic School. “In addition, we are appreciative for the cooperation and assistance that you continuously give to the Office of Catholic Schools,” she said.

Barrett is marking her 40th anniversary in Catholic education this year, all of it at Seton. She taught second grade for eight years and served as assistant principal for two years while earning her master’s degree in educational administration. In 1991, she was named principal.

Thanking Kathy Mazander for all she does “to further the teaching mission of Jesus Christ and His Church,” Weiss said the recognition of Distinguished Teacher of the Year is presented to an educator “who strives for excellence in teaching” and “has contributed significantly to the learning community.”

Mazander is in her 11th year of teaching first and second grades at the Kickapoo school, and has also taught religious education there. When her son and daughter attended St. Mary School, she was an active volunteer, taking lunchroom duty, helping in the office and teaching PE.

Profiles of Father John, Barrett and Mazander will be published in the Catholic Schools Week section of The Catholic Post on Jan. 31, 2021.