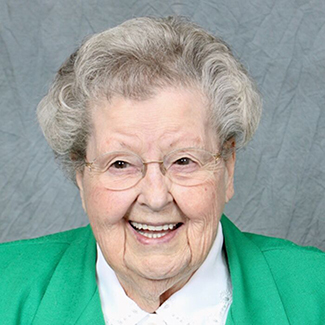 ROCK ISLAND — Sister Mary Jane Wallace, OSB, a longtime classroom and music teacher who published a book about her experiences earlier this year, died at St. Mary Monastery on Oct. 27, 2020. She was 91.

Because of restrictions on public gatherings due to COVID-19, a private visitation and Christian wake service are planned for Wednesday, Oct. 28. A private Mass of Christian Burial will be celebrated on Thursday, Oct. 29, at 10 a.m. in the chapel of St. Mary Monastery and may be viewed by visiting the community’s Facebook page, Benedictine Sisters of St. Mary Monastery.

The daughter of Francis and Helen (Harvey) Wallace, Sister Mary Jane was born on April 3, 1929, in Creston, Iowa. She attended grade schools in Creston, Des Moines, Burlington and Ottumwa, Iowa, and Hastings, Nebraska, and completed grade school and high school at St. Mary’s Academy in Nauvoo.

She would go on to earn a bachelor’s degree from St. Ambrose College in Davenport, Iowa, and pursued graduate studies in music education at the University of Illinois in Urbana-Champaign. Sister Mary Jane received a certificate in theology from St. Norbert College in De Pere, Wisconsin.

In the Diocese of Peoria, Sister Mary Jane taught at St. Mary School and Seton Catholic School, both in Moline; Holy Family in Peoria; and St. Mary’s Academy and Sts. Peter and Paul School, both in Nauvoo. Other teaching assignments took her to St. Columba School in Chicago and St. Thomas More School in Munster, Indiana.

She also ministered as a pastoral associate at St. Mary in Moline, and Resurrection in LaSalle, and served her community at St. Mary Monastery as house coordinator and secretary to the prioress.

Sister Mary Jane continued to give piano lessons to children and adults until her death.

She wrote about her education ministry in “Whatever Happened to the Sandbox? Enjoying the Creative Wisdom of Children,” which was published by St. Mary Monastery in Rock Island. The 94-page book was released in January 2020 and was featured in the March 15 issue of The Catholic Post.

“My vocation has brought me so much happiness, joy and peace,” Sister Mary Jane said when she celebrated her 70th anniversary of consecrated life in 2019. “Jesus has promised that those who follow Him will receive a hundredfold and I have found that to be so true.”

Preceded in death by her parents and her brother, Leo Wallace, Sister Mary Jane is survived by her cousins and the Benedictine Sisters of St. Mary Monastery.