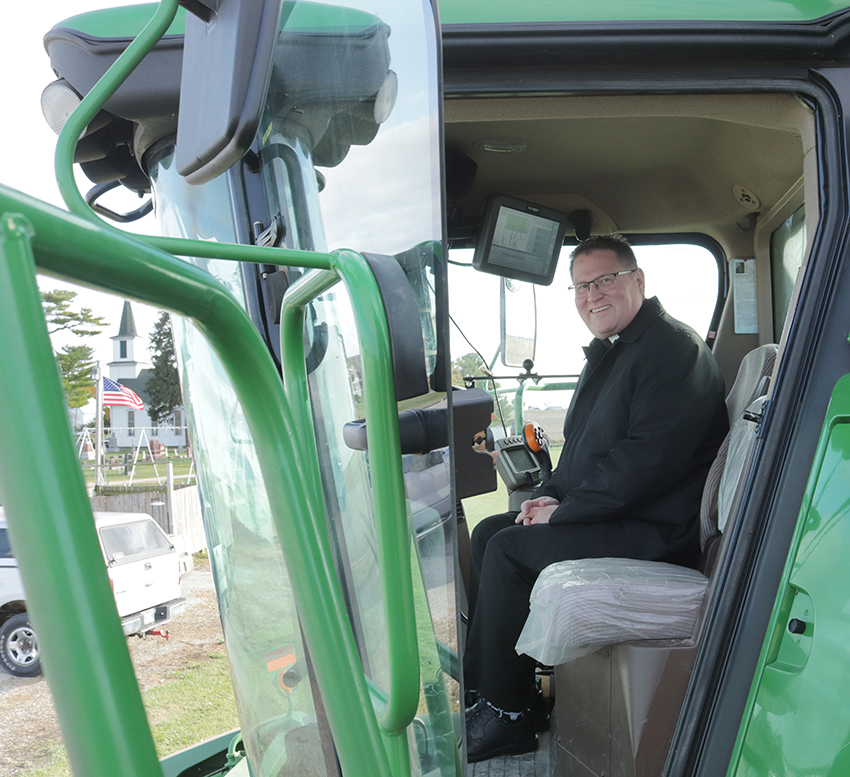 Coadjutor Bishop Louis Tylka started his visit to St. Patrick Church in Raritan by climbing up into the cab of a combine owned by the Brokaw family. Richard Brokaw said he answered as many questions as he could before they had to move on. The church and cemetery can be seen on the left. (The Catholic Post/Richard Brokaw)

RARITAN — After a challenging growing season, farmers in this Henderson County community gave thanks for yields of corn and soybeans that were better than expected at a Harvest Mass on Oct. 24. Joining them for the liturgy at St. Patrick Church was Coadjutor Bishop Louis Tylka.

“This is my first-ever Harvest Mass, but not my last,” he told those who filled every available seat in the church that COVID-19 protocols would permit. “I look forward to coming back and celebrating with you again.” 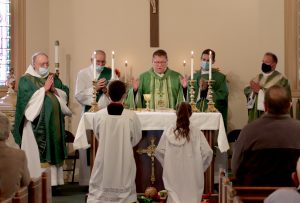 His visit continued with a pulled pork dinner in the St. Patrick Community Center, which has been completely remodeled in the last two years.

If Mass started a few minutes later than scheduled that afternoon, it was because Bishop Tylka was getting to know more about the people who work the land and the equipment they use. He climbed a ladder to sit in the cab of a combine owned by the Brokaw family, and then saw what life looked like from the cab of a tractor owned by the Kane family.

Richard Brokaw said he answered as many of Bishop Tylka’s questions as possible in the time they had, but could have talked for much longer. “It’s one of your most important pieces of equipment,” Brokaw said of the combine, which is used to harvest the corn.

He also showed Bishop Tylka what was under the hood and gave him a brief description of what he was looking at.

“Everybody’s been waiting for this all summer, since he announced in Monmouth that he was going to come,” Brokaw said, referring to the first of Bishop Tylka’s 12 vicariate Masses on Aug. 15.

“There are a lot of farmers here who shut their combines down. They wanted to get an opportunity to meet him,” he told The Catholic Post. “We’re glad to have him come out and experience a rural atmosphere.”

LOVING LORD, ONE ANOTHER

At the beginning of Mass, Bishop Tylka said that when he told people he was coming to Raritan, they said, “Better make sure you know where you’re going.” When the laughter died down, he said he had brought not one, but two masters of ceremony so he wouldn’t get lost. 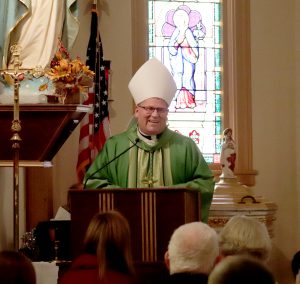 “When I said I was going out to Raritan, folks said, ‘Better make sure you know where you’re going,'” Coadjutor Bishop Louis Tylka told parishioners at St. Patrick Church as he began his homily for the Harvest Mass on Oct. 24. He joined them in laughter when he added that he brought not one but two masters of ceremony so he wouldn’t get lost. (The Catholic Post/Jennifer Willems)

Waiting to welcome him were Msgr. Thomas Mack, pastor, and Father Daniel McShane, parochial vicar, and Father Lee Brokaw, who grew up in the parish and now serves as administrator of faith communities in Galesburg, as well as parish leaders.

In his homily, Bishop Tylka talked about how Jesus linked love of God and love of neighbor and what that love entails.

“Jesus is talking about a love that is about sacrifice,” he said. “Committed love. A willingness to live for the Lord and to live for others.”

Jesus demonstrated that kind of love by dying on the cross. That sacrifice and commitment can be seen in the way husbands and wives love one another and in the way they love their children, he said.

Bishop Tylka recalled another example, telling those gathered at St. Patrick Church of how Father Brokaw had tweeted a picture of people coming together in their combines to clear a field for someone who needed help.

“That’s exactly the type of love that I think we’re called to, to be willing to go that extra mile to help one another out, to make sure that what needs to get done gets done, not because we expect something in return, but because we know in our hearts that to show the love of God we have we have to be there for one another,” he said.

That also happens when we visit those who are sick, are generous to the poor, help out in a soup kitchen, or check in on family and friends, especially during this pandemic, according to Bishop Tylka.

“Reaching out and demonstrating that care for one another is at the heart of loving the Lord and loving one another,” he said.

Bishop Tylka’s mention of farm families helping one another in times of need struck a chord with those in St. Patrick Church, said Richard Brokaw.

“When a farmer gets sick — it usually happens there’s one or two cases each year where someone dies in a farm accident or an older man passes away — that all the neighbors go in one certain day. The elevator that they usually haul to shuts down to everybody else and lets that farmer’s grain come in. We’ll have 10 or 12 combines . . . harvest all his crops,” he told The Post.

“That’s just the difference in a rural atmosphere,” said Brokaw, who farms 1,000 acres with his sister-in-law Brenda Brokaw. “The bishop understands that — you help someone when they’re in need.”

This year presented weather challenges, starting in April. The soil conditions were right for planting, but the temperatures were not and it didn’t warm up until later in the month, he said. 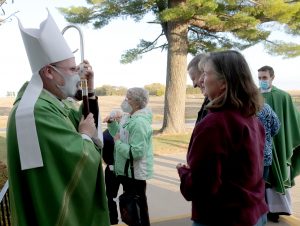 “We got timely rains in May, June and even July. But in August the faucet shut off. We only had two-tenths of an inch the entire month of August,” Richard Brokaw said, explaining that the soybean crop is “made” in August. “You have to have some timely rains for the seed to mature and we didn’t have that, so everyone was nervous.”

And while the derecho that devastated parts of Iowa and northern Illinois didn’t cause a problem in the Raritan area, there were a couple of wind “events” that were a challenge.

“But farming is full of challenges,” Brokaw said. “No two years are the same.”

In spite of everything, things worked out well. He said corn yields were between 210 and 240 bushels an acre and even though they were expecting lower yields with the soybeans they still got 60 to 70 bushels an acre.

“We don’t know where it came from other than God was looking out for us,” Brokaw said.

Done harvesting his fields, he estimated that about 25 percent of the corn in the area still needed to come in.

Brokaw said he’s thankful to have had a father and older brother who were hard workers and demonstrated the importance of that work ethic. His brother, Pat, was Brenda’s husband and Father Brokaw’s father.

“Those work ethics are bred into you. So’s your religion,” Richard Brokaw said. “Our parish is a strong parish — the church was built in 1876. I hope it’s here for several more generations.”

EDITOR’S NOTE: More photos from the Harvest Mass and Bishop Tylka’s visit to Raritan have been posted to The Catholic Post’s site on Facebook.