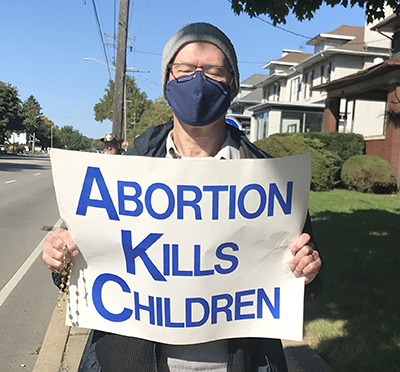 It’s very pleasant here, I’m thinking. Some elderly folks have lawn chairs on the sidewalk. Kids are playing on the grass just beyond. Most of us don’t know one another, though we all know why we’re here.

It’s Sunday, October 4th. The breeze is whispering early-autumn secrets to the leaves, turning their heads with its ancient siren song as the sun speckles down through the branches. It’s cool, but most of us are well-bundled, six feet apart, some with masks.

We are praying silently as we face the street with our pro-life signs outside the Planned Parenthood facility in Peoria for the annual Life Chain. I’d say there are about 200 of us here — not a bad turn-out.

I was looking for my customary sign, “Say Yes to Life.” Instead, I’m handed one that says, “Abortion kills children.” My spirit shrinks from the bluntness, but later it strikes me that nothing brings the point home more clearly.

I’m reminded of Life Chains gone by. Though at times I’ve allowed the details and duties of living to draw me away, over the last 30 years this first Sunday of October has become something of a rite of fall. So much so that when I arrived this afternoon, I was looking for my customary sign, “Say Yes to Life.”

However, I guess they don’t have that one here. Instead, I’m handed one that says, “Abortion kills children.” My spirit shrinks from the bluntness, but later, as I stand holding the sign against my chest so the people in the passing cars can see, it strikes me that nothing brings the point home more clearly. Here I am reminiscing about 30 years of Life Chains and pretty fall afternoons gone by. Meanwhile, millions of lives are gone by.

DOES THIS DO ANY GOOD?

The next day I return to the sidewalk outside Planned Parenthood. I am here as part of the 40 Days for Life prayer vigil. This time I’m alone — it’s difficult to get people to fill all the hours. I walk and pray and wonder: Does this do any good? Yes, I have faith that it does. I don’t know exactly how God turns a solitary rosary prayed on a silent sidewalk outside an empty building into something to help prevent abortions, but I pray anyway.

I pray for support for women in crisis pregnancies through programs such as “Walking With Moms in Need” from the U.S. Conference of Catholic Bishops.

I pray for women who have had abortions. There have been 60 million abortions in the U.S. since Roe v. Wade. How many mothers (and fathers) does that represent?

Until those hearts are healed, it’s hard to imagine turning the tide on abortion. I once knew a woman who had an abortion in her youth. In her 40s, she still went to Mass, but never to Communion. I’ll always remember her face, looking down, as the rest of us went up.

Pope Francis stresses that abortion will be forgiven in confession. I pray that God’s mercy is fully absorbed by those who need it (and in terms of societal involvement, we all need it). I pray that when we talk about abortion, we also weave in reconciliation, and make mention of hope-after-abortion ministries such as Project Rachel.

Finally, as a recent immigrant (2018), I wouldn’t presume to tell anyone how to vote. However, please allow me to share something from my own experience as a pro-life voter in Canada. For several election cycles before moving down here, I routinely questioned candidates of all parties about their position on abortion. I discovered that virtually no Canadian political candidate at any level — municipal, regional or national — was willing to publicly acknowledge being pro-life.

Some were “personally opposed, but…” However, when it came time to mark my ballot, there was never a choice of someone willing to speak up for the sanctity of life from conception until natural death.

I pray that America will cherish the choice. It may not always be there.