Halloweenish chills in story of Blessed Bartolo Longo, the ‘Apostle of the Rosary’ 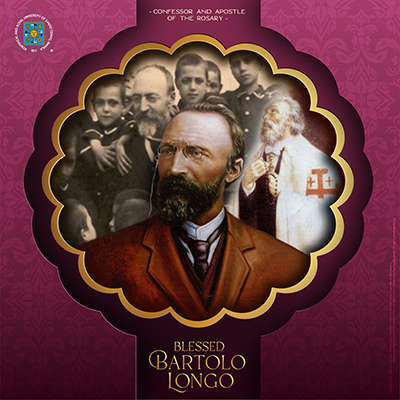 A Guest Column by Katie Faley

It is Halloween time once again, and I recently discovered a chilling story full of intrigue and horror, dark twists and turns, and even witchcraft that has set the mood for this season.

It all started when my friend texted and asked if I wanted to do a 54-day rosary novena with her. I replied, “Absolutely I do.” It had been a few years since I last prayed a 54-day novena, so I decided I should brush up on the “what” and the “why” behind this prayer.

While scrolling through articles, I came across a name that I had not seen before: Blessed Bartolo Longo. Being the theology enthusiast that I am, I like to keep my finger on the pulse of the emerging saints in our Church. So, I clicked.

FROM SATANIST TO SAINT

Bartolo Longo was born in Italy in 1841 and raised in a devout Catholic family. When Bartolo was a young adult, Italy was going through a major upheaval. Many universities were the breeding ground for hate against the Catholic Church. When Bartolo went to law school, he got swept up by the anti-Catholic philosophies of his professors, many of whom were ex-priests.

As this month of the rosary comes to a close, I find myself moved by the former Satanic priest Blessed Bartolo Longo to fervently pray the 54-day rosary novena and trust even more in the graces from Our Lady.

Bartolo became distant from the faith but was still seeking supernatural fulfillment. He drew close to a pagan group at school and visited a medium. He descended further into the occult, participating in séances and practicing “magic.” He was eventually “ordained” a Satanic priest, promising himself to a demon. He dedicated his life to denouncing God by convincing other Catholics to leave the faith and participate in the same dark practices he was so heavily immersed in.

As it turned out, however, being a missionary of the devil left his thirst for the supernatural unfulfilled. He sank into a heavy depression and was overcome by demonic visions. In some of his darkest hours, he heard the voice of his deceased father begging him to “return to God.” Moved by this call and completely desperate, Bartolo turned to an old professor friend who got him in contact with a Dominican priest, Father Alberto Radente. After encouraging Bartolo to abandon Satanism and make a heartfelt confession, which he did, Father Alberto was able to grant Bartolo absolution and welcome him back into the arms of the Church.

Bartolo began to pray, serve the sick, and even became a Third Order Dominican himself. He took the name Brother Rosario because of a newfound devotion to Mary and the Holy Spirit through the rosary. He came to firmly believe in the power of the rosary to deliver us from the evil one. Turning back to God, he finally found the fulfillment for which he had been longing.

NOT WITHOUT THE ROSARY

Despite his conversion back to Catholicism, Bartolo wasn’t without occasional doubts about his eternal salvation. He worried that because he had consecrated his soul to the devil that he was no longer capable of receiving salvation through Jesus. At his lowest point of despair, he recalled the words of Mary, “One who propagates my rosary shall be saved.” He fell to his knees and embraced the rosary and Mary as his life’s dedication. He went on to build Pompeii’s famous Basilica of Our Lady of the Most Holy Rosary, compose novenas, and write books on the rosary.

It is fitting, then, that the origin of this 54-day rosary novena is in Pompeii in 1884. Mary appeared to a girl who was greatly suffering and said, “Now, since thou hast called me by that title so pleasing to me, ‘Queen of the Holy Rosary,’ I can no longer refuse the favor thou dost petition; for this name is most precious and dear to me. Make three novenas, and thou shalt obtain all.”

The novena is split into two sets of 27 days — the first 27 days prayed in petition and the second prayed in thanksgiving, whether the petition was granted in the way we were expecting or not. Blessed Bartolo was moved by the power of the rosary to strengthen both his own faith and the faith of the Church, and now, as this month of the rosary comes to a close, I find myself moved by this former Satanic priest to fervently pray this 54-day rosary novena and trust even more in the graces from Our Lady.

KATIE FALEY has a master’s degree in theology and theological studies from the University of Notre Dame. A member of St. Mark Parish in Peoria, she is a former Echo Catechetical Leader at St. Elizabeth Seton Parish in Naperville.